SAN NICOLAS DE LOS ARROYOS, Argentina (RNS) Once a month, thousands of devout Catholics descend on this small industrial city, where a woman with little education but great faith said she began seeing visions of the Virgin Mary on Sept. 25, 1983.

After all these years the crowds flocking to a shrine built on the site are as big as ever, and they could well grow still further now that the local bishop has declared that the visions are genuine.

Not that the devout needed much encouragement.

Just a few weeks ago, for example, despite bitter cold and torrential rains — it’s winter in Argentina — pilgrims from around the country filed through the streets to the Shrine of Our Lady of the Rosary of San Nicolas.

“We come to give thanks,” said a 50-year-old woman from Buenos Aires who gave her name as Dora. She said she began taking part in the processions, which are held on the 25th of the month, more than 30 years ago, “when there was nothing here.”

Now there’s an enormous domed church that rises above the banks of the mighty Parana River. Even though the facade is still unfinished brickwork, the shrine was inaugurated in 2014 after more than half a million people — or about three times the city’s population — turned out for the 30th anniversary of the first apparition. 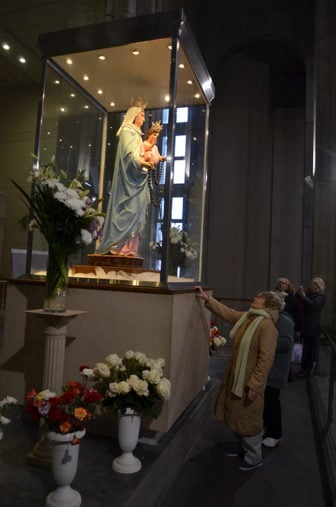 An icon of the Virgin Mother draws visitors inside the Shrine of Our Lady of the Rosary of San Nicolas on July 25, 2016 in San Nicolas de Arroyos, Argentina. RNS photo by Fernando Poggi

When the anniversary procession takes place, as it will on Sept. 25, pilgrims cast flower petals before an icon of the Virgin Mary clutching a large rosary with both hands while holding the child Jesus, and volunteers in blue jackets fill jugs with “blessed water” from the site.

Several weeks ago, some were in tears as they approached the church along streets lined with souvenir shops. A priest encouraged pilgrims to buy raffle tickets to help finance the completion of construction work.

Gladys Motta, the visionary who is now in her 80s, still lives a couple blocks from the church, though she rarely ventures out. That doesn’t stop pilgrims from slipping notes in her mailbox asking her to intercede with the Virgin Mary on their behalf.

Motta began seeing the apparitions after she saw rosaries glowing in homes throughout San Nicolas de los Arroyos. She began to pray to the Virgin Mary, who subsequently appeared to her carrying the infant Jesus and wearing a blue gown and veil.

Since 1983, Motta says she has received more than 1,800 visitations from Mary and another 68 from Jesus. Miraculous healings and glowing rosaries have been attributed to them.

In May, the bishop of San Nicolas, the Rev. Hector Cardelli, declared that Motta’s visions were of a “supernatural character” and he said he believed the messages had been sent by God.

That was a possible first step toward elevating Our Lady of the Rosary of San Nicolas to a major place of pilgrimage on a par with famous Marian shrines like Lourdes in France, Fatima in Portugal or Guadalupe in Mexico.

“So we have an apparition where we have a living visionary, who’s approved as authentic by the bishops,” Michael O’Neil, who runs the website MiracleHunter.com, told Catholic News Agency. “Usually they wait until the messages end or the visionary dies, but in this particular case they decided to go ahead with the approval.”

In an interview in the sacristy of the shrine, Cardelli, who became bishop in 2004, said the confirmation that Motta’s visions were worthy of belief was arrived at after psychiatric tests that ensured that she was of sound mind, as well as extensive research and consultations with other clergy and experts.

“The quality, richness of and exquisite content of the messages, and what they produced in terms of conversions, life changes, and healings cannot be the result of mere human action,” Cardelli told RNS.

Cardelli said he spoke about the apparitions with Pope Francis back when the Argentine pontiff was still Cardinal Jorge Bergoglio, archbishop of Buenos Aires, and the future pope approved of his confirming them.

Aside from wanting a shrine built to her in San Nicolas, the Virgin Mother’s messages — according to Motta — urged renewed faith and frequently lamented the current state of the world.

In another sign that the church accepts Motta’s visions, the diocese last year began publishing messages including many that hadn’t been made public previously.

“This mother continues to endure pain,” says one of the messages. “Pain because humanity is headed for ruin; pain from seeing so much hatred in the world; pain from so much war; pain from such great atheism, pain because men are not allowed to bring the Lord into their hearts.”

The diocese has also begun posting them on its Facebook page. On Aug. 11, it ran one of the first messages Motta said she received, a little more than a month after the first apparition:

“Your faith in me shall be as the burning flame of a torch.”

(Veronica Engler is a contributor to RNS based in Buenos Aires)