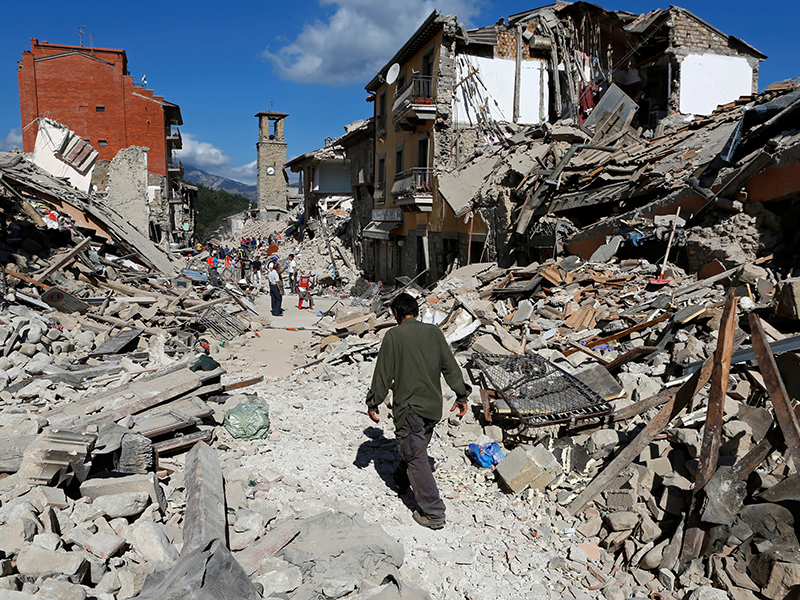 A man walks amid rubble after an earthquake in Pescara del Tronto, central Italy, on Aug. 24, 2016. Courtesy of REUTERS/Remo Casilli
August 24, 2016
Josephine McKenna

VATICAN CITY (RNS) Pope Francis expressed his “heartfelt sorrow” after a powerful earthquake killed at least 120 people and left a trail of destruction across central Italy.

Hundreds of people were injured and dozens of others missing in several small towns after the magnitude-6.2 quake struck at 3:36 a.m. local time Wednesday (Aug. 24). The quake’s epicenter was about 90 miles northeast of Rome, but the shock waves were felt from the southern city of Naples to the northern town of Rimini on the Adriatic Coast. A powerful aftershock of 5.4 magnitude followed an hour later.

The pope changed the scheduled program of his weekly audience and led the faithful in praying the rosary for the victims and their families in St. Peter’s Square.

“I cannot fail to express my heartfelt sorrow and spiritual closeness to all those present in the zones afflicted,” the pope said.

“I also express my condolences to those who have lost loved ones, and my spiritual support to those who are anxious and afraid.”

Italy's Catholic bishops donated 1 million euros to the quake victims and announced that a national collection would be taken up in Catholic churches across the country on Sept. 18.

As dozens of aftershocks continued throughout the day, rescue crews and volunteers used sniffer dogs, bulldozers and their bare hands to sift through piles of rubble and debris in Amatrice and Accumoli, the hardest-hit towns, in a desperate search for survivors.

At least 35 of the victims came from Amatrice, according to Italian news agency ANSA.

“The situation is dramatic, there are many dead," said Sergio Pirozzi, mayor of Amatrice. “Rescue efforts are underway and it is very, very difficult. Half the village has disappeared.

“The aim now is to save as many lives as possible.”

Italy’s civil protection agency said the quake was similar to the devastating 6.3-magnitude quake that killed 308 people in the town of L’Aquila in 2009.

The death toll from Wednesday’s tragedy was expected to rise as dozens remained unaccounted for. Among the victims were an 18-month-old girl who was killed while she was sleeping and a 4-year-old boy who died in a hospital from his injuries after being rescued from Amatrice.

“Learning that there are children among the dead, I am deeply saddened,” the pope said as he assured victims and their families “of the prayers and close solidarity of the entire church.”

He urged Catholic pilgrims to “let our hearts be moved with compassion.”

Survivors told of their horror when they fled their beds and ran into the streets and saw the extent of the destruction.

“We are living with this immense tragedy,” the Rev. Savino D’Amelio, a parish priest in Amatrice, told The Associated Press.  “We are only hoping there will be the least number of victims possible and that we all have the courage to move on.”

Italian Prime Minister Matteo Renzi paid tribute to the volunteers and civil defense officials who rushed to the scene and pledged to do everything possible to save lives and support those affected by the tragedy.

The Vatican said it had sent six firefighters to the affected region to assist in rescue efforts, while hundreds of volunteers from the Red Cross were heading to the area to set up a kitchen to cater for survivors and their families.