CHICAGO (RNS) Kenneth A. Briggs has been on the “Godbeat” for years, as a religion reporter for Newsday, as religion editor at The New York Times and now as a contributor to the National Catholic Reporter.

In that time, the lifelong Methodist has seen the Bible “become a museum exhibit, hallowed as a treasure but enigmatic and untouched,” he writes in his book “The Invisible Bestseller: Searching for the Bible in America.”

And so Briggs set out on a two-year, cross-country journey to investigate the Bible’s disappearance from public life and see where he could find it still. He’s documented that journey in “The Invisible Bestseller,” released this month by Wm. B. Eerdmans Publishing Co.

Along the way, he met a homiletics professor who encouraged her students to explore the text by exchanging roles with the characters in biblical accounts, and he came across professors at evangelical colleges surprised by how little their incoming students knew about the Bible. He attended a meeting of Bible promoters in Orlando, Fla., worried nobody was reading their tomes; the academic Society of Biblical Literature convention in Chicago; and a traditional Presbyterian church in Pennsylvania. He was deeply moved by his visit to a federal prison in upstate New York, where, he said, the inmates knew the Bible better than he did.

Briggs spoke with RNS about what he learned. The interview has been edited for length and clarity. 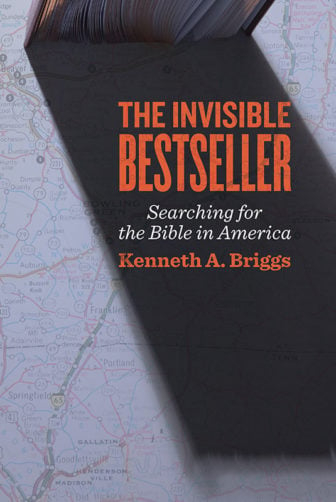 Q: When you say the Bible is disappearing from public life, what do you mean?

A: Well, people aren’t reading it very much, and it just doesn’t show up in — as they love to say — public discourse. It doesn’t really make many appearances, and it is not in the public consciousness. The Bible is kind of off the public grid in a way I’ve never experienced before.

Q: In all your travels and all the the different places you went looking for the Bible, was there any place where you were expecting to see the Bible where it wasn’t?

A: In the mega-type churches — the churches that were really heavily loaded with the visual and the audio and the rest of the electronic stuff, the music — I was really stunned by what I saw as that alternative verson of Christianity being delivered through those means. I didn’t consider it biblical in the fullest sense. I thought it was highly stylized — the versions of Jesus, who Jesus was, being filtered through these videos — and, in some way, I found almost shocking in how they seemed to vary from the much fuller picture that exists in the New Testament. So I was surprised by that.

Q: Where were you most surprised to find the Bible?

A: I don’t know if there were any major surprises, but I would find within the groups of people that I would be with that there were some people who took an approach to it that was quite — I hate to use the word “serious,” but they were quite engaged with it. They really wanted to know what it was. That was the more surprising thing. A lot of Bible study is just kind of either rote learning or what they used to call the “banking system of education,” where the banker hands out stuff and everybody takes it and leaves.

One of the people I spent a little bit of time with was Anna Carter Florence, who teaches homiletics at Columbia Theological Seminary in Georgia. She’s a rather interesting person who got her inspiration by being in repertory theater at Yale, and she has brought that to the preaching thing. That’s what Bible study can be: where people actually exchange roles and say, “You be Sarah,” to loosen up the process enough to really allow the questioning if it’s going to become personal.

Q: What does it say about us, that despite the diminished role of the Bible, it’s still listed in Guinness World Records as the world’s best-selling book?

A: We still love it to some extent as an artifact, as a keepsake, as a gift to people we think do read the Bible even though we may not, so it remains very popular that way and something almost like — I don’t want to say quite “rabbit’s foot,” but it’s sort of like that. Every home should have at least one, and the average is between four and five.

Q: What would you say is the Bible’s current position in American public life, and how have you seen that change? What was it before?

A: It’s largely unknown. By that same token, it’s discoverable, and it’s not assumed anymore that people know about it.

It used to be something people thought they ought to know something about, and they did largely know the do’s and don’ts when the Bible was regarded, at the very least, as a rule book that gave you the moral guidelines to get into heaven or to lead a decent life, not to be cynical about it.

Q: How do you think this has impacted us as a culture and the way we engage in religion and politics and public life?

A: One thing we miss in this is the potential to enlarge our minds and hearts and spirits. I think the Bible is the springboard to opening all kinds of ideas, thoughts, beliefs about what our life is about. And I think without it, it narrows our perspective and gives us a much more truncated view of what the possibilities are. I don’t think we’re getting as much of the larger picture by avoiding the source that has been that pathway to all kinds of discovery. (It’s been the pathway to) entertaining most profound thoughts about what possibly we might belong to beyond ourselves or our immediate communities.

Q: You write in the book about the emergence of “Bible-less Christianity.” Can you talk about how you see that play out in American culture?

A: The background, of course, is that the Reformation gave at least a segment of Christians access to the Bible in a way that hadn’t happened before. Most of our history has been a rather Bible-less Christianity that was dictated or defined mostly by the hierarchical church, not by people who read the Bible. … We gained the freedom to approach it, and then in the current age, we have ceded that exploration to media, to entertainment forms, to prepackaged interpretations that are delivered in video, audio and pulpit forms so that there’s a substitute Bible that isn’t the Bible, per se, at the same time that people aren’t reading.