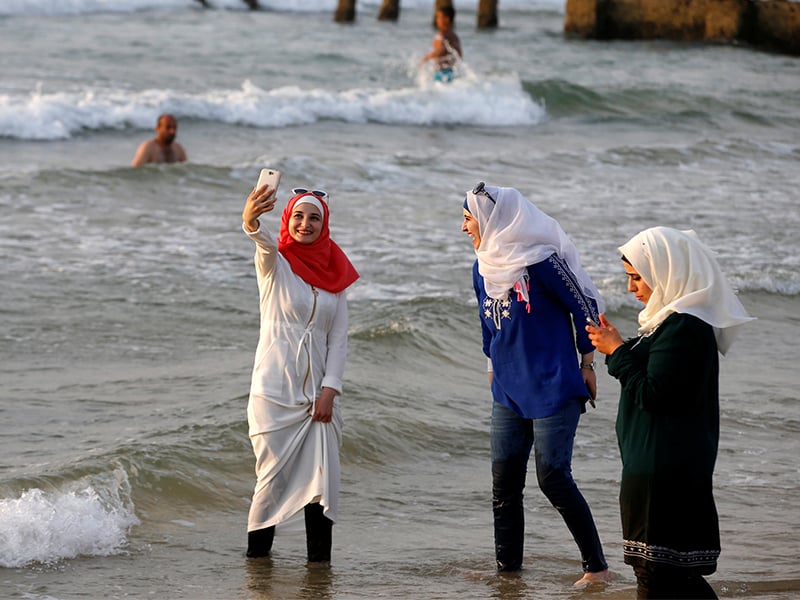 A Muslim woman wearing a hijab takes a selfie as she stands in the Mediterranean Sea at a beach in Tel Aviv, Israel, on Aug. 30, 2016. Photo courtesy of REUTERS/Baz Ratner *Editors: This photo may only be republished with RNS-NASSER-OPED, originally transmitted on Sept. 8, 2016.
September 8, 2016
guest

(RNS) With the recent scrutiny over female headscarves, bathing suits, beachwear – you name it – commentators across media outlets have been decrying the Islamic teaching that men and women should dress modestly when out and about, claiming it is outdated, backward and doesn’t do society any good.

Is that the case? The first thing to note about Islam is that it teaches men as well as women to dress modestly, with men specifically prohibited from wearing gold and silk. Further, the Quran addresses men first, telling them to lower their gaze and not go “checking out” women, and secondly, to guard themselves against situations in which they may become aroused by those to whom they are not married.

After putting the responsibility on men to not harass women, the Quran reiterates these two teachings for women also, and in addition, teaches women to dress modestly by covering their hair and their chests and to beautify themselves for their family rather than for society. Another verse advises women to avoid tight, revealing clothing when out and about.

So what’s all the fuss about? Why not let it all hang out? Aren’t we sophisticated enough in this 21st century to not be bound by what seem to be antiquated teachings?

There are many reasons people – Muslim and non-Muslims -- adopt modest dress, each individual to themselves. However, the fundamental Islamic reason is the immense importance given to a family unit, born of a healthy marriage.

The Institute for Fiscal Studies in 2010 confirmed this when its work demonstrated that married couples are four times less likely to be separated in the first three years of a child’s life than equivalent cohabiting couples, with the trend continuing as the children grew older. For this reason, Islamic teachings emphasize the importance of marriage as the only construct for sexual relations.

Consider our own society, in which premarital relationships are common and in which an individual from 15 to 30 years of age is able and indeed often encouraged to have many consensual sexual partners. Is it reasonable to then tell such an individual at 30 years of age to settle down for the next 40 years with only one person, and expect the person to be happier in that union than when he or she previously could come and go with relative ease from such relationships?

It is quite obvious that when you’re raised all your life being able to eat 20 different cuisines, being told to eat from only one for the rest of your life isn’t exactly going to be something to look forward to. Throw in the immense amount of pornography teenage boys in particular are watching, with first exposure typically at age 11, and the fact that around 56 percent of U.S. divorce cases involve one partner’s obsession with pornography, and we see how the problem is compounded. “Lowering one’s gaze” in such a context takes on a whole new dimension.

A society in which premarital sexual relations is the norm will inevitably result both in a larger number of children born to relatively unstable cohabiting couples and a higher incidence of divorce, with some married partners being unable to restrict themselves sexually or psychologically to their spouse. Issues that previously would have caused a breakup with the boyfriend or girlfriend must now be simply put up with because of the label of “marriage”!

In the case of men especially, whose sexuality is deeply connected to what they see of women, it would be unrealistic to expect sexual restraint without teaching them to control their sight, whether on the internet or out in public. Similar is the case for modesty of dress, and the expectation of premarital sexual restraint when both parties dress as immodestly as they want while freely interacting with each other. It is, therefore, to protect the sanctity of marriage that Islam teaches both men and women to dress and behave modestly in public.

When I think about the above issues, I am reminded of a T-shirt I once saw, which summed it all up for me. It was an image of stick figures of a bride and groom, arm in arm. Above the image were the words “GAME OVER” in big white lettering. As a Muslim man who was raised with the Islamic teaching of self-restraint before marriage, my perspective of marriage was starkly different. Marriage for me was the beginning of the journey, not the end.

We must recognize that long-term commitment between couples, as occurs in marriage, is necessary for the healthy upbringing of future generations. For this reason, Islam promotes modesty of dress and behavior for men and women, so as to render that commitment easy and, indeed, desirable.

The Islamic teaching of modesty of dress is often framed as being a curtailment of female rights, but ironically, the consequences of immodest dress and behavior by both men and women in society, such as divorce and single parenthood, inevitably hit women harder than men. Upon them is usually forced the role of breadwinner and homemaker, with no regard for their health. It should not then surprise us in today’s society that women have twice the rates of depression as men. The effects on children of single parenthood and parental divorce are similarly well-documented, with higher rates of childhood mental and physical health problems, such as obesity and asthma.

While these issues cannot (and should not) be applied at an individual level, they do necessarily have population-wide effects. Contrary to what the pundits may say, modesty – in whatever form a person feels comfortable with – has very real and tangible benefits for society. Indeed, the prophet of Islam said it best with the following words:

(Tahir Nasser is a 27-year-old physician and a regular contributor and commentator in British media. Find him on Twitter: @TahirNasser)