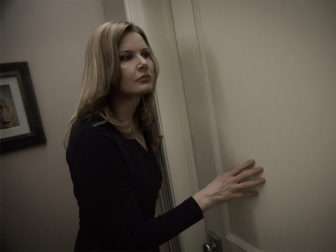 Angela Rance (Geena Davis) is pretty sure her home is possessed, so she requests help from her priest, the Rev. Tomas Ortega (Alfonso Herrera). At first, Ortega isn’t so quick to believe Angela, but he agrees to come over and have dinner with her family. In preparation, Ortega does some research into demonic possession, and discovers Marcus Keane (Ben Daniels), a priest and experienced exorcist. Well, it would seem that God — or Satan? — works in mysterious ways: Ortega recognizes Keane from nightmares that have been haunting him.

TV shows that explore exorcism are often disappointing because they don’t take Roman Catholicism seriously. These writers, though, have done some homework and seem to want to portray religion — and its supernatural advocates and enemies — in a way that invites viewers to thoughtfully engage. The theology presented here won’t please everyone, particularly the shock moments, like when a demon kills its human host. But the writers know the best way to explore good and evil is to do so in the lives of its characters. Each character on the show is on a faith journey. This is particularly true of the priests, both of whom belong to the literary tradition of ethically complicated religious leaders.

The first episode starts out strong, then fluctuates between highs and lows, before culminating in a strong, mind-bending final scene that both sets the tone for the rest of the season and compels you to keep watching. 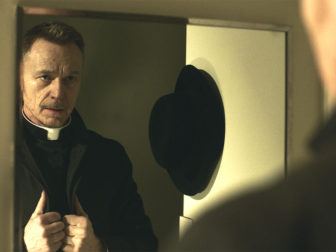 Ben Daniels in “The Exorcist,” premiering Sept. 23 on Fox. Photo courtesy of Fox

That depends on whether you like being scared. While not as gory (or depraved) as its film namesake, “The Exorcist” definitely pushes the limits of the network suspense genre. Some of that fear is mitigated by cheesy special effects, such as the cheap computer-generated image of a crow crashing into a window. But there are still plenty of scary moments that don’t require a special FX team: long shots of a priest walking through his church’s pitch-dark basement, close-ups of demon-possessed children. Upshot: Horror fans craving a new TV series won’t be too disappointed. Oh, and another thing: Father Ortega is the hottest priest you will ever see, so that’s a bonus!

After an embarrassing accident involving grocery shopping carts, Eleanor Shellstrop (Kristen Bell) finds herself in the afterlife. She’s welcomed by Michael (Ted Danson), who tells her she made it to “the good place” — as opposed to the bad one down below. He gives Eleanor a tour of her beautiful new home and introduces her to her handsome soulmate, Chidi (William Jackson Harper), a former ethics professor. Eleanor is thrilled about her new life, but there’s just one tiny problem: The higher-ups made a mistake. They think Eleanor is someone else, someone who deserves to be in the good place. Eleanor, as she knows full well, deserves to be in the bad place. But she’s not leaving! So she decides to become the kind of person everyone thinks she is. She’s going to be good — and her new soulmate, the only person who knows her secret, is going to help her. 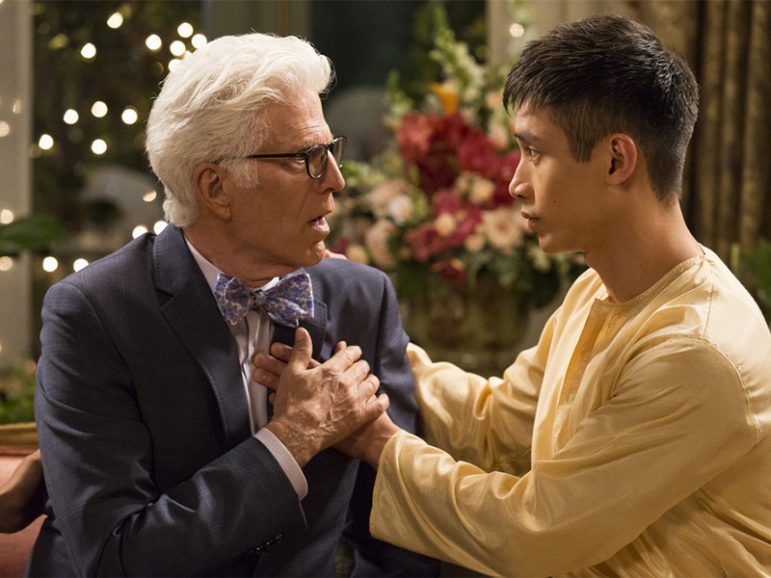 Ted Danson as Michael, left, and Manny Jacinto as Jiany in the pilot episode of “The Good Place.” Photo by Justin Lubin/NBC

Upon learning she’s in the “good place,” Eleanor asks Michael: “Who was right about religion?” “Well,” says Michael, “all of them — Hindus, Muslims, Christians, Jews, etc. — were a little bit right.” Maybe 5 percent correct, he estimates. This conversation sets the stage for what the show wants to do, which is to challenge the more rigid notions of heaven, hell, God and religion. Eleanor’s journey to purge herself of her old ways so she can earn her place in heaven doesn’t seem all that different from how some Catholics see purgatory. That’s the point: Humans have different, culturally conditioned categories for understanding reality, but in the end maybe we’re all trying to get at the same thing?

Bell is perfect in this role, and if the rest of the series lives up to its fabulous pilot, “The Good Place” will quickly become one of the best new shows on TV.

Absolutely! This show has a quirky heart, which makes it a rare gem. Don’t miss it.

This show is tough to describe because the last few minutes of the first episode contain a major game-changing surprise. But without giving too much away: Several characters from completely different walks of life are turning 36. Each of them feels stuck and knows it’s time for a change: An overweight woman determines to lose the weight, and a sitcom actor quits his series. As you might expect, their paths begin to cross in unexpected ways, and we learn just how connected these strangers really are.

Sure, the whole “show-how-these-strangers-are-connected-even-if-they-don’t-realize-it” device isn’t new — but the show succeeds anyway. In today’s fast-paced, competitive, fragmented world, it’s always a good reminder that we’re all connected to each other, even, and especially when, we aren’t aware of it. 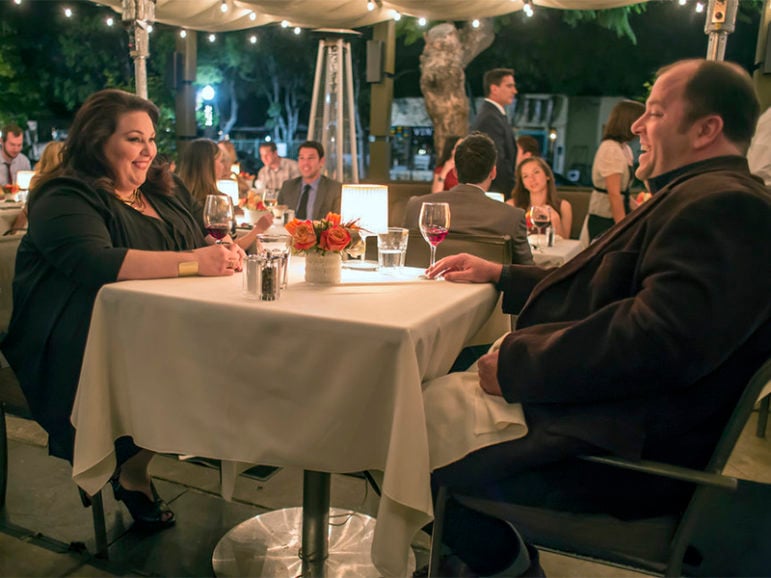 Chrissy Metz as Kate, left, and Chris Sullivan as Toby in “This Is Us” on NBC. Photo by Ron Batzdorff/NBC

It’s great from go, but if you’re not convinced, the final surprise of the pilot episode will grab your attention.

There is something for everyone here. The writing is so smart and the cast is so diverse that every demographic will find a reason to tune in. Bonus: If you’ve been looking for something to replace “Parenthood,” this might be it.

Religion Hub
How threats of hellfire helped keep ‘immodest’ women in their place – from the ancient world to ‘My Unorthodox Life’
Follow us on Facebook!
Submit your photos to RNS