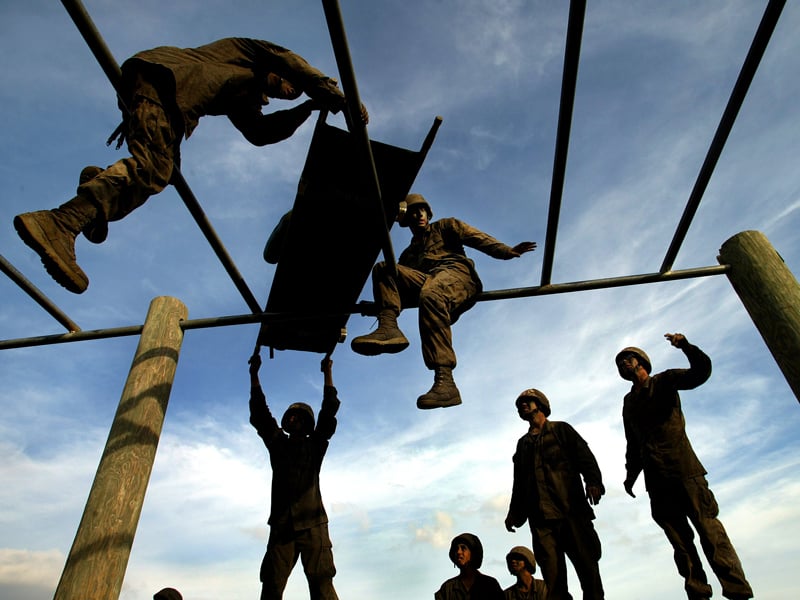 U.S. Marine recruits work through an obstacle course during the "Crucible" part of training exercises at Parris Island, S.C., on Jan. 4, 2005. Photo courtesy of Reuters *Editors: This photo may only be republished with RNS-MARINE-SUICIDE, originally transmitted on Sept. 14, 2016.
September 14, 2016
RNS staff

DETROIT — The family of a Muslim recruit who died during Marine Corps training is pushing back against claims by military officials that he committed suicide.

Raheel Siddiqui, 20, was in basic training with the Marines on Parris Island in South Carolina when he died March 7 after falling 40 feet in a stairwell. Marine officials have said Siddiqui killed himself, but in a statement released Tuesday (Sept. 13) through the family's attorney, Shiraz Khan, his relatives said "they do not believe the story of Raheel committing suicide."

"We believe there is a lack of material evidence needed to support 'suicide' as the most probable cause of death in this case," the family said through Khan.

Siddiqui didn't have any "disqualifying conditions, medical or otherwise, during recruiting and processing into the U.S. Marine Corps,” Khan said. "It’s impossible for his family and friends to accept that he took his own life."

Siddiqui, who was a Pakistani-American Muslim from Taylor, Mich., may have been targeted because of his ethnicity and religion, said family members. The Detroit Free Press has reported that his drill sergeant was abusive toward Siddiqui and a previous recruit who was Muslim, according to Marine officials.

The Wall Street Journal first reported the allegations from investigators that Siddiqui was abused. The Journal report said investigators found that the drill sergeant told the previous Muslim recruit he was a terrorist and involved in the Sept. 11, 2001, attacks and once stuffed him into a clothes dryer. The drill sergeant also reportedly called Siddiqui a terrorist.

Nabih Ayad, the previous attorney for the family, has said that shortly before Siddiqui died, the drill sergeant smacked the recruit after he became unresponsive. Ayad has said Marine officials told the family that Siddiqui had told his supervisors in a note that he was suicidal, a claim the family thought was absurd because he was known to be a positive person.

Twenty personnel in the Marines could face disciplinary action tied to the case, officials have said.

In the statement Tuesday, the family called for justice for all, regardless of their faith.

Also on Tuesday, the Michigan branch of the Council on American-Islamic Relations called for a federal civil rights investigation into Siddiqui's death. The group called for the rights of religious minorities serving in the U.S. military to be protected.

U.S. Rep. Debbie Dingell, D-Mich., and others have previously called for a full accounting of what happened to Siddiqui.