(RNS) A new documentary series will acknowledge what millions of football, soccer and baseball fans have known for years — love of sports can be a religion.

“Religion of Sports” is  produced by former Super Bowl rivals Tom Brady and Michael Strahan, along with director Gotham Chopra, the son of spirituality guru Deepak Chopra. Its six hourlong episodes will air beginning Nov. 15 on the Audience Network.

“You hear ‘Religion of Sports,’ and you say, ‘OK, so sport is a religion?,'” said Strahan, who recently began co-hosting ABC’s “Good Morning America.” “Well, yeah, it really is. The temple is this arena or stadium. These athletes can be considered the gods in certain ways and the fans can be considered parishioners. So to be able to explore that and this spiritual connection between sports and life, that’s what really piqued my interest.”

“It’s stories about why sports gives people purpose, meaning and significance — whether you’re an athlete, fan or person that works within sports,” he told The Associated Press. “It’s very much character-driven. The backdrop happens to be sports.”

The link between sports and religion has long been recognized by everyone from serious academics to rabid fans. In 2009, the magazine Psychology Today reported: “Psychologists are closing in on the conclusion that sport has many of the same effects on spectators as religion does.” 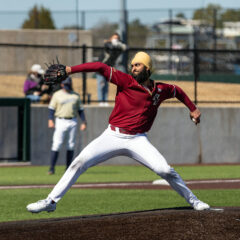 Articles of Faith
Samrath Singh, first turbaned Sikh to play NCAA baseball, is more than the challenges he has overcome

News
For California Muslims: A Ramadan approaching normal
Follow us on Facebook!
Submit your photos to RNS