(RNS) The first national survey of Jewish voters this election season shows solid support for presidential nominee Hillary Clinton in keeping with their historic allegiance to the Democratic Party.

Asked whom they would vote for if the election were held today, 61 percent of Jewish adults said Clinton and 19 percent picked GOP nominee Trump in the American Jewish Committee survey.

“Clinton’s 42-point lead matches the historical average of Democratic margins among Jewish voters over the past 40 years and demonstrates that American Jews remain a base constituency for the Democratic Party,” said Jim Gerstein, a Democratic pollster and campaign consultant. 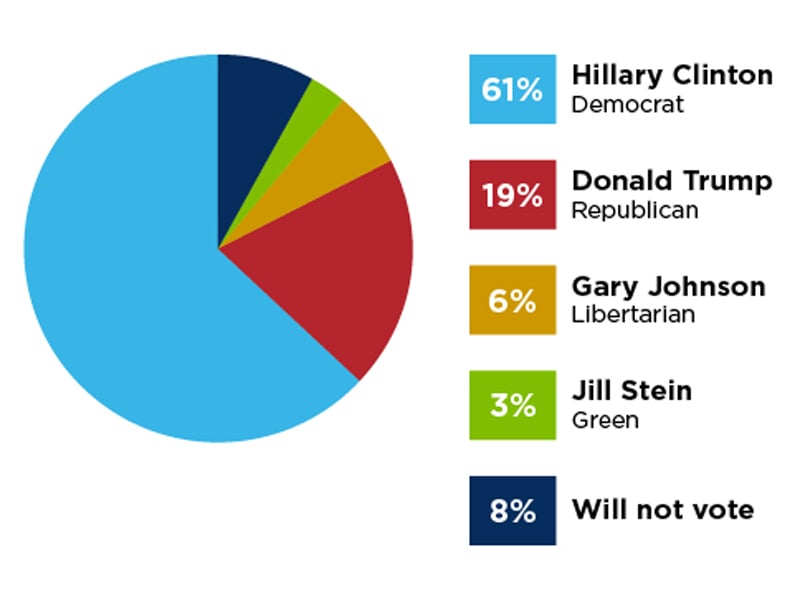 “If the presidential election were held today, for whom would you most likely vote?” Graphic courtesy of AJC

But even some Democrats have noted that Jewish support for Clinton is not as great as President Obama’s in the September 2012 AJC poll, where he garnered 65 percent of the Jewish vote compared with 24 percent for Republican Mitt Romney.

Still, said Kenneth D. Wald, a University of Florida political science professor who studies the Jewish vote, the former secretary of state has nothing to worry about among Jews.

“If you look at most recent presidential elections, you find that Jews typically favor Democrats by a 2-1 margin. That Secretary Clinton has a 3-1 ratio over Trump suggests that she’s running extremely well among Jews,” he said.

Wald continued: “The Iran issue, her one liability on Jewish concerns in some eyes, probably engages the Orthodox and hawks on Israel who have been disproportionately Republican for decades. So I would read these results as very good news for the Democrats.”

Clinton supported the Iran nuclear deal to lift sanctions on Iran, whose leaders have denied the Holocaust, supported terrorist groups hostile to Israel and pledged to destroy it. But the American Jewish community is divided on the deal, with some American Jews arguing that it slows Iran’s nuclear program and makes Israel safer.

Wald added that Trump has offended Jews, many of whom see the U.S. as a sanctuary for immigrants, as it was for their forebears in the past two centuries.

“His flirtation with the alt-right and his demonizing of Muslims, Mexicans and others with populist appeals raises Jewish hackles,” Wald said. “I expect him to do especially badly among Jews this year.”

The AJC poll, of 1,002 Jewish adults 18 and older, also found that Israel is not the top issue for American Jews, a finding consistent with past surveys of Jewish voters.

Respondents to the survey, which has a margin of error of plus or minus 3.5 percentage points, named the economy and jobs as their top concern (51 percent choose it first or second), followed by terrorism and national security (with 31 percent rating it first or second.)

The AJC, a New York based nonprofit, also found in its survey that: