The prayer took place in a Shiite shrine but was led by a Sunni imam as part of an initiative by a volunteer group called Shoulder to Shoulder.

“In Uttar Pradesh, sectarian tensions surfaced occasionally between the two sects,” said Arif Durrani, a member of Shoulder to Shoulder. “We came up with this idea of joint Shia-Sunni congregational prayer.”

Around 85 percent of world’s Muslims are Sunni and about 15 percent are Shiite. The groups rarely pray together.

Their differences date back to a dispute over the succession to Prophet Muhammad for leadership of the Muslim community. Since that time, the sects’ religious rituals, traditions and customs — mostly related to legal codes — have followed two different routes.

But violence between Shiites and Sunnis has intensified in recent years, especially in Syria, Iraq, Saudi Arabia, and in areas controlled by the Islamic State group, which has launched fierce attacks against Shiites in west Asia. 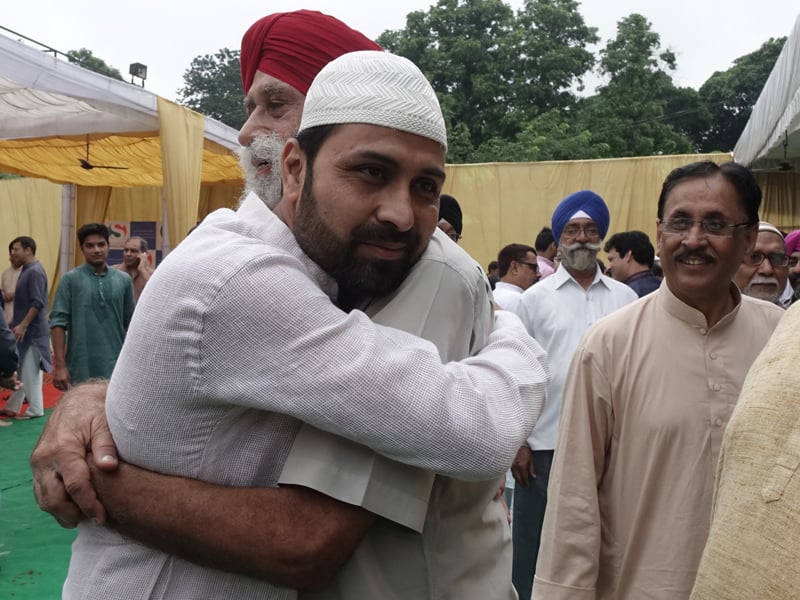 Muslims and Sikhs greet each other after congregational prayers between Sunni and Shiites to mark Eid al-Adha on Sept. 13, 2016. Photo courtesy Akhtar Ali

In India, where Shiites constitute less than a third of its 170 million Muslim population, the two sects have lived in peace for centuries. Indeed, a similar joint prayer was held in a Shiite mosque in New Delhi, the capital, on Tuesday (Sept. 13), organized by a branch of Shoulder to Shoulder.

Since the group’s start in Lucknow last year, its volunteers have been trying to bring the two Islamic sects closer together.

“The members of Shoulder to Shoulder were convinced that this ‘namaz’ would be a defining moment in the history of Shiite-Sunni unity starting from Lucknow, where the Shia-Sunni divide is very distinct,” said Sibtain Baqri, a Shiite volunteer, using the Persian word for the five daily prayers offered by Muslims.

“We were able to more than double the number of attendees at the namaz this year and the following on social media for our cause highlights the point that acceptability and appeal of the idea is growing,” he added.

This year’s prayer at the Shahnajaf Imambara Lawns took place in the presence of several non-Muslim community members.

As soon as the Muslims finished the prayer, they embraced and hugged the Sikh, Hindu and Christian community members. Sikh volunteers offered refreshments.

Last Ramadan, Shoulder to Shoulder organized an all-community iftar, the meal ending the daily fast, co-sponsored by a Sikh gurdwara. At Christmas the group’s members offered free food at a local Catholic shelter run by the Missionaries of Charity.

“We all were created by one God,” said Sikh community leader Gurmeet Singh, who attended the prayer. “In a pluralistic society such initiative deserves to be backed by all.”

The Rev. Donald De Souza, chancellor and spokesperson of Catholic Diocese of Lucknow, greeted and hugged the Muslims following the prayer.

“This is the need of the hour in the country where in the name of religion people are fighting with each other,” De Souza said. “We need to foster brotherhood and harmony for the sake of peace.”

(Akhtar Ali is a Delhi-based correspondent)