(RNS) Thank God for the internet.

If you believe in God, that is. For a time, Mike McHargue did and then he didn’t and now he does again.

But it’s on the internet where McHargue — better known as “Science Mike” to listeners of “The Liturgists” and “Ask Science Mike” podcasts — found community when he was questioning his Southern Baptist upbringing and then the atheism he had adopted. And it’s on the internet where he’s forged a community with others like him who can’t comfortably wear either label: Christian or atheist.

“My place in church community and this sense of belonging I feel now has largely come from how many people responded as I started to talk about these things openly,” he said. “But it tends to make certain Christians and atheists uncomfortable to embrace both a materialistic, empirical view of the cosmos through science as well as something more numinous through the lens of the spiritual.”

McHargue questioned Christianity when he began to doubt the authority of the Bible. But he questioned atheism, too, after he had a mystical experience as he prayed haltingly on the beach in California: The waves rushed toward him, and he said he “felt God with me, in me and through me.”

He shared his story of losing and finding faith with RNS and in his new book, “Finding God in the Waves: How I Lost my Faith and Found it Again through Science.” This interview has been edited for length and clarity. 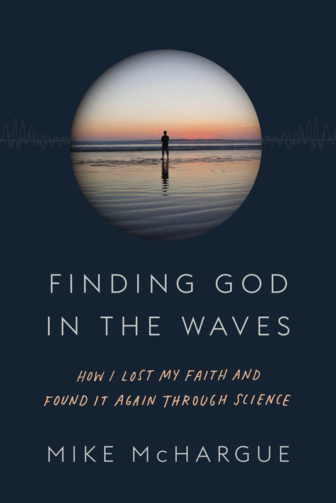 Mike McHargue, better known as “Science Mike,” is the author of “Finding God in the Waves: How I Lost my Faith and Found It Again through Science.” Photo courtesy of Convergent Books

You grew up a conservative Christian. What caused you to question those beliefs?

My dad had an affair, and he was the music minister at church and my spiritual role model, really. … I told him I would lead him through a Bible study that would help him reconcile his marriage and his relationship with God, and I wanted to make sure I gave him the best answers I could, which would be God’s answers, so I started to read the Bible with a nerd’s obsession. I read the whole thing in about three months, and that’s when it all started to come apart for me.

You always have been very interested in science. Had that never clashed with your faith and been an issue for you until that point?

It had never been an issue because I considered God’s authority pre-eminent and science’s knowledge provisional. … Where that came apart wasn’t actually a faith-science conflict. It was when I started to realize the Bible contradicted itself, and as I began to lose confidence in the Bible’s authority, I realized it wasn’t science that was wrong about the universe, but actually the Bible.

What was the response you received when you left the church?

At first, I didn’t leave. I just kind of played and pretended. When we (my family and I) finally left, it’s not because we thought we were done with church, it’s that the controversy about how my faith had changed was too much.

A lot of the atheist communities I had belonged to online, when I returned to faith, I lost my place in most of them. They viewed that as a delusional, unreasonable move. So that was a really lonely time — maybe too skeptical for Christians and too enamored with this word “God” for the comfort of atheists.

How do you think both Christians and atheists can better support their questioning, believing friends?

I think we should be less obsessed with getting everybody to agree with us. There are so many pertinent, pressing issues in our society that have nothing to do with our epistemology, whether God is real or not.

Once we demote our individual view of reality from such prime importance only then can we learn to understand that people arrive at their beliefs for good reasons — that maybe for Christians, good, reasonable, smart people can make an informed decision they don’t believe in God without being evil. At the same time, atheists can realize it’s somewhat naive and somewhat ignorant of cognitive psychology and neuroscience to believe one has to be delusional or not grounded in reality to believe in God — even a supernatural God. These are both reasonable positions to exist within the human experience, and neither camp can claim some superior state of enlightenment or better representation of what it means to be human.

At the heart of the story of your return to Christianity is this mystical experience. Is there a scientific explanation for such experiences, or how do you hold mysticism and science in tension?

I think it’s certainly plausible to explain mystical experience in terms of brain states, although if you’ve had one, that explanation doesn’t satisfy. There’s this part of a mystical experience where you feel like it all makes sense in a way you never have before — the kinds of questions we wrestle with about death and suffering and evil, God’s love, all those things kind of melt away in this unimaginably bright light that you feel as much as you see.

So the way I approach it is if that was just a brain state, I’m really grateful for it, but if it was more than a brain state, I want to be open to whatever the source or origin of that experience was. The way I know how to do that, and the way most humans express that openness, is through spiritual practices, and from what I’ve seen in neuroscience, that’s the best thing we’re aware of for fostering those kinds of experience — things like prayer and meditation and, indeed, participation in religious communities.

What are some of the most compelling things you’ve found in your scientific studies that point you back to God?

Probably the first thing would be how ideally suited the human brain is as a host for beliefs about God, the way belief seems to be relatively inevitable a consequence of human consciousness, and the way our brains tend to develop in healthy ways when we indulge that belief, especially in a God who is loving. Beyond that, as you learn more about cosmology and physics, particle physics or quantum physics, you find our world is at least as mysterious and beautiful and, I might even poetically say, magical as anything depicted in the sacred texts of the world’s great wisdom traditions.

You described yourself at the time you returned to faith as “an emotional and experiential Christian who also was an intellectual atheist.” Is that still how you would describe yourself, or how have your beliefs changed?

You know, Mike the Baptist and Mike the Atheist share something in common: I’m going to get to the bottom of this. I’m going to be the one who knows as much as there is to know. Where I’ve changed is I’ve realized that’s impossible. I’m not trying to get to some intellectual destination anymore. I’m trying to enjoy the ride, the journey we call life.

Sometimes I feel the best way to look at the world in a given moment is through the lens of an atheist, especially when I’m evaluating truth claims. Other times, on a beautiful day when I’m out with my family, and I want to stop and express gratitude for that moment and these people, the fact that I get to exist and experience this, my only way of articulating that is a prayer of thanks to a God that I believe in. That sounds like cognitive dissonance to a lot of people, but I call it honesty.

I’ve just given up trying to turn the world into an equation I can solve, and instead, it’s a gift I receive.

Atheists and Christians often are seen as hostile toward each other, but that doesn’t seem to have been your experience. Having been both, what do you think atheists get wrong about Christians and vice versa?

Christians aren’t stupid, and atheists aren’t evil, and I know there’s hope for better conversations or relationships between Christians and atheists because both “Ask Science Mike” and “The Liturgists” podcasts have significant representations from both groups, and when we hang out in that context, everybody gets along just fine.

I think people who have been judged a lot don’t have the emotional bandwidth to do that to people anymore, and I think that’s why our audience is so lovely. On the Island of Misfit Toys, nobody is a misfit anymore. 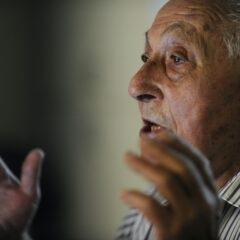