CHICAGO (RNS) A Belmont University freshman “is no longer a student” at the Christian school after sending a racist Snapchat post about three African-American football players who had protested the treatment of minorities in America.

The post was sent under the Snapchat username “juswoodard97″ during Monday’s (Sept. 19) game between the Philadelphia Eagles and Chicago Bears at Soldier Field in Chicago.

It showed Eagles players Malcolm Jenkins, Ron Brooks and Steven Means with their fists raised during the national anthem and was captioned with a racial slur followed by this threat: “Every one of them needs a damn bullet in their head. If you don’t like this country get the hell out.”

The post was created by a freshman at Belmont, a school of about 7,700 students in Nashville that has Southern Baptist roots. It generated an outcry Tuesday as it was saved and shared across other social media networks.

“The University rejects comments rooted in racism or bigotry,” the school said in a statement Tuesday.

“As a Christian institution, it is our goal to build a diverse and inclusive community where all members feel accepted, safe and valued.”

UPDATE: After investigating the racist social media post, the person involved is no longer a student at Belmont. pic.twitter.com/BA4hNAUbPC

Before the game, Jenkins had said he and his teammates were considering joining San Francisco 49ers quarterback Colin Kaepernick in his protest of the way racial minorities are treated.

Kaepernick has drawn both praise and criticism for kneeling in silent protest during the national anthem. 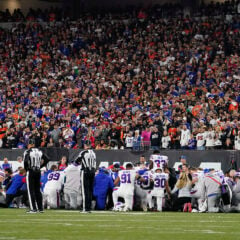