“The Prophet Isaiah at the Walls of Jerusalem” from three volumes of an antiphonary made for the Franciscan community of Bethlehem Venice, ca. 1401–4.  Image courtesy of Marie-Armelle Beaulieu/CTS
September 26, 2016
Yonat Shimron

After a “pregnant pause,” the gray-bearded prelate asked quietly, “Whose story do you intend to tell?’

Co-curators Barbara Drake Boehm and Melanie Holcomb recall replying: “All of them and none of them.”

View of Jerusalem. From "Journey to the Holy Land" ("Peregrinatio in Terram sanctam") published in Mainz, Germany, in 1486 .  Image courtesy of The Metropolitan Museum of Art

The patriarch’s question was on point: Jerusalem is one of the world's oldest contested properties, claimed spiritually and sometimes physically by all three Abrahamic faiths: Judaism, Christianity and Islam.

Over the millennia, each has created an immense body of art and artifacts supporting its own story. And then there are the smaller claims on the city from, among others, Armenian, Coptic, Ethiopian, Georgian, Latin, Maronite, Nestorian, Orthodox and Syriac churches.

What museum had the resources and the judgment to present a full and balanced picture?

The Met does, it turns out. “Every People” features 202 illuminations, devotional objects, architectural elements, textiles, weapons and pieces of jewelry created in or inspired by Jerusalem. As wondrous as some of the individual items are -- like a 2-foot tall, gold-plated, jewel-encrusted relic box from 12th-century Limoges, France, or a pair of elegant and frightening longswords -- the show’s true spectacle is aggregate.

There are dozens of compelling objects and images interacting much as their makers did: fighting, influencing and being influenced by one another, engaging in what might be called parallel play, and sometimes even agreeing -- but all caught up in what the two curators, who have been at this project so long that they finish one another’s sentences -- call “Jerusalem Fever.”

The fascination, they say, began at the turn of the first millennium, when an increase in travel brought merchants and pilgrims of all three faiths into the city. The Crusader occupation of 1099 to 1187 was only the most dramatic of more than a half-dozen regime changes, each bringing new soldiers, clergy and dependents, and stoking near-obsession as far as Africa and Asia.

Reliquary Cross of Jacques de Vitry from Byzantium, in stages, between about 1160 and 1228.  Image courtesy of the Musee Provincial des Arts Anciens in Belgium

The show, which opened Monday (Sept. 26,) is resolute in representing nonreligious art from the city: textiles, pottery, and metalwork establishing its vitality as a merchant hub and trading post. But religion was Jerusalem's great catalyst.

Some of the pieces in the show are landmark examples of the three faith’s initial stakes in the city. There is a sketch by Judaism’s most famous jurist, Maimonides, of the layout of the first Jewish temple. (The Western Wall, beloved by Jews today, is assumed to be part of a later temple.)

A few steps away, something completely different: bejeweled Christian reliquaries from all over Europe, crafted to hold splinters from the cross on which Jesus was crucified. The True Cross was purportedly recovered right next to the tomb where Jesus was buried, and from which, Christians believe, he rose; together in Jerusalem’s Church of the Holy Sepulchre the twinned sites are the holiest to that faith.

A delicate watercolor dating to Persia in 1314 (a locale and time where portraying Muhammad was allowed) shows the prophet, mounted on his half-human horse Buraq, arriving in heaven during what the Quran calls the "Night Journey." Their earthly jumping-off place is understood to have been either the Al-Aqsa Mosque or its neighboring Dome of the Rock shrine, making the city Islam’s third-holiest place after Mecca and Medina.

All this competing sanctity helped birth the Crusades, which produced some remarkable art: 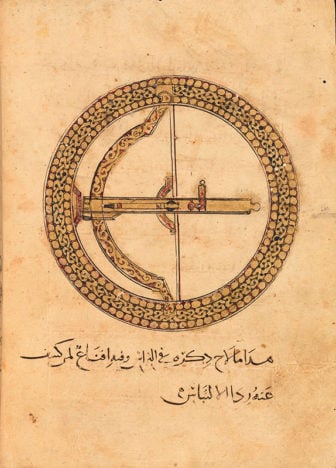 Saladin’s treatise on armor, from Syria, before 1187. Opaque watercolor, gold, and ink on paper.  Image courtesy of the University of Oxford

Boehm explained how an image of the Prophet Isaiah before the city’s walls was part of what could be called a multimedia recruiting poster.

“Imagine,” she said, “You’re in a church where the entrance points intentionally toward the Holy Land, you’re singing ‘Jerusalem the Golden,’" a famous Crusading hymn, “and in the middle of the musical page is this image.

Jewish wedding ring made of gold from Germany, from first half of the 14th century. Photo by B. Stefan via The Metropolitan Museum of Art

Even in peacetime Jerusalem’s passionate observers could entertain remarkably partisan views of the city. A German nobleman-bishop brought an artist along on pilgrimage and produced a best-selling book, whose spectacular seven-page-fold-out map is at the Met.

The map accommodates both a Christian outlook from the Mount of Olives and a frontal view of the Holy Sepulchre -- a perspective that Boehm called “almost cubist.” Its detail is breathtaking, with a glaring exception: It omits most of the city’s Muslim shrines.

The reverse -- what might be called “unintentional inclusion” -- is represented by a 700-year old Jewish wedding ring complete with what its designer may have thought was a tiny replica of the original Jewish Temple. Instead, its hexagonal shape suggests it was mistakenly modeled on the Muslim Dome of the Rock.

Or perhaps the jeweler just understood that to be the temple’s ideal shape. Many medieval images didn’t represent the “real” Jerusalem, but rather a perfected version from the holy past or the apocalyptic future.

In the New Testament book of Revelation, the narrator envisions “the new Jerusalem, coming down out of heaven, prepared as a bride adorned for her husband.” Many of the show’s Christian images reflect that geometrically perfect, bejeweled city.

A Catalan Jewish Bible from about 1380 offers a highly stylized image of the Mount of Olives splitting in two as predicted by the Prophet Zechariah. And the mascot for the exhibit is the angel Israfil from a late 14th-century Syrian or Egyptian manuscript, blowing away at a trumpet to summon all humanity to Jerusalem for what the Quran calls the "Day of Resurrection." 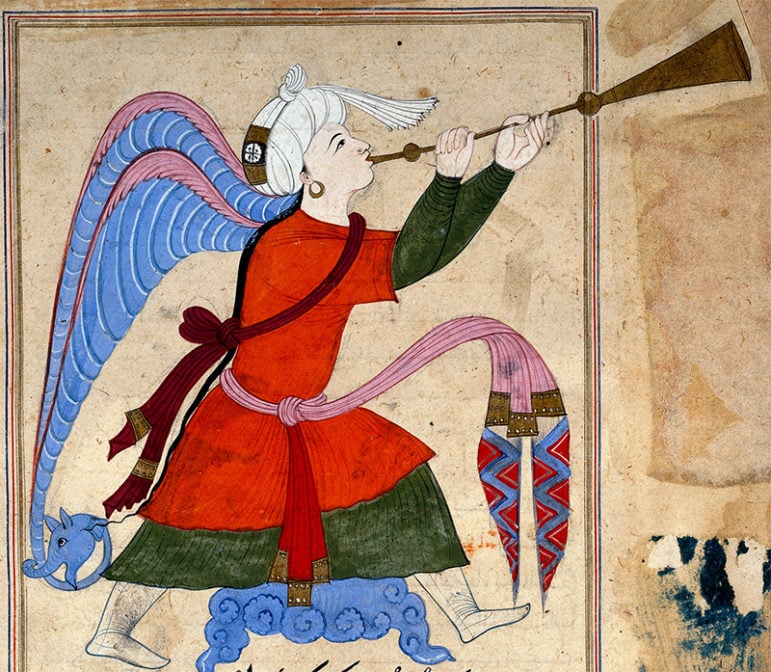 "The Archangel Israfil" (detail) from "‘Aja’ib al-Makhluqat" ("The Wonders of Creation and Oddities of Existence") by al-Qazwini (1202–1283) . From Egypt or Syria in late 14th – early 15th century.  Opaque watercolor and ink on paper. Image courtesy of The Trustees of the British Museum

In Jerusalem, Boehm said, there was a “very thin membrane” between the earthly and metaphysical.

That porousness is the origin of all the show’s marvelous art and of many of the city’s troubles, past and present. Almost lost on one wall of the show is a photograph of a glorious pulpit that stood in the Al-Aqsa Mosque from 1188 until 1969, when a delusional Australian torched it. He was trying to destroy the mosque so that the temple could be rebuilt to facilitate Jesus’ return.

And yet, the curators insist, the city’s religious crosscurrents unite as well as divide.

Many medieval Jerusalemites, they say, were proud of the city’s polyglot nature. As proof the exhibit offers a 13th-century gospel book illustration by a group of monks who had been forced to leave the city and then returned.

It portrays Jesus’ entry on Palm Sunday. Yet its city is not first-century Jerusalem, but 13th-century Jerusalem -- or perhaps its perfected self: a cheery group of inhabitants of every kind fill the page: young, old, dark-skinned, light-skinned, the women veiled and unveiled. This, after all, is the place whose name is thought to have originally meant “City of Peace.”

(David Van Biema is an RNS correspondent based in New York)