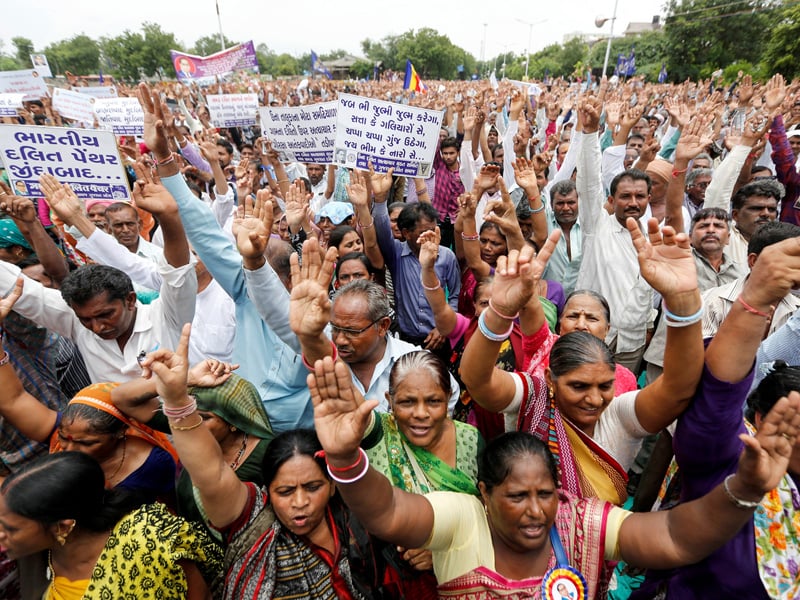 People shout slogans as they attend a protest rally against what they say are attacks on India's low-caste Dalit community in Ahmedabad, India, on July 31, 2016. Photo courtesy of Reuters/Amit Dave
September 27, 2016
RNS staff

MUMBAI, India (RNS) Next month, Kanti Sarvaiya will abandon his Hindu heritage and become a Buddhist.

“Hinduism has done nothing for us,” said Sarvaiya, 20, who lives in the western state of Gujarat. “So our family elders have decided to convert.”

In July, upper-caste men publicly flogged a group of Dalits – formerly considered “untouchables” – in Mota Samadhiyala village on the suspicion of slaughtering a cow, which Indians consider sacred. Among the victims were Sarvaiya's relatives.

Fed up with the divisiveness of Hinduism’s caste system -- entrenched for centuries -- he and his family want out.

On Oct. 11, in rallies across the state, at least 40,000 people are expected to “take deeksha” or formally covert to Buddhism in publicly organized ceremonies in at least four cities. Various Dalit groups and nonprofits are helping coordinate this series of rallies. 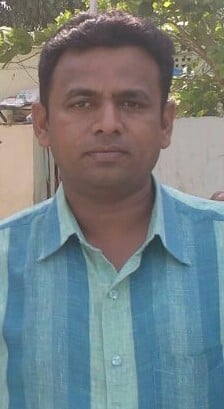 Ashok Samrat, 35, a prominent Dalit leader in Gujarat who converted at a public event in 2009. Photo courtesy of Ashok Samrat

“More people die of caste-related violence than terrorism,” said Ashok Samrat, 35, a prominent Dalit leader in Gujarat who himself converted at a public event in 2009 and is helping organize the events. “Buddhism has shown the possibility of dignity and equality.”

Gujarat, which is Indian Prime Minister Narendra Modi’s home state, has been seething with resentment since the July flogging. And it’s not the only Dalit-related controversy this year.

In January, Rohith Vemula, a Dalit doctoral student, committed suicide at the University of Hyderabad, triggering protests and leading to the initiation of criminal charges of caste-related atrocities against a minister and university vice chancellor.

Conversion is one kind of response.

Aside from the rallies in Gujarat, in April the family of the doctoral student officially converted to Buddhism at a ceremony in Mumbai. In a coastal Tamil Nadu village, scores of families are contemplating conversion to Islam after they were allegedly refused entry into a temple.

Lower-caste conversion to other religions -- most often Buddhism -- isn’t new, but it is receiving a renewed impetus in the wake of the violence.

The caste system, a feature of Hinduism, divides people into groups; at the bottom are the untouchables. Historically, they have been denied education, consigned to menial tasks such as scavenging and deprived of basic dignity and self-determination.

The Indian Constitution safeguards what it calls “scheduled castes” though affirmative action policies. In theory, all citizens are equal, but in practice violence is on the rise.

In 1956, Dalit leader and national icon Babasaheb Ambedkar, who also framed India’s Constitution, led a mass conversion to Buddhism in Maharashtra after unsuccessfully fighting for change within Hinduism.

Referred to as the neo-Buddhist movement, such mass conversions have regularly taken place since.

“We found a connection with Buddhism,” said Laxman Mane, an activist and poet from Maharashtra. Mane converted in 2006 and then galvanized 500,000 others to do the same in a public ceremony in Mumbai in 2007.

A mass conversion of this nature is not purely a religious choice.

“It is a way to organize; it is a political choice,” said Mane.

He and those who converted in the 2007 ceremony are technically identified as "tribes" and as a result were not Hindus (and therefore not members of the Dalit community).

“In India, conversion is a mode of protest and expressing dissatisfaction,” said C. Lakshmanan, associate professor at the Madras Institute of Development Studies in Chennai. “It is both political and religious.”

Lakshmanan said the number of such incidents has exploded because Dalits refuse to submit to age-old indignities.

Modi addressed these issues during a recent television interview, condemning the caste atrocities.

“All those who have fed this country with the poison of caste divide have destroyed the country,” he said. “We must go forward with a purpose. … Are these incidents fitting of a civilized society?"

However, he was widely criticized for remaining silent on the July flogging incident for several days after it took place. And there is a sense among activists and community members that despite his public condemnation, caste violence has intensified since his party, the right-wing Hindu nationalist party the BJP, came to power in May 2014.

Crimes against scheduled castes, including Dalits, increased 19 percent from 2013 to 2014, according to national crime date statistics.

“There was oppression during the previous government’s rule too, but it is worse now,” said Shyam Sonar, a Mumbai-based activist.

In India, Hindus constitute about 80 percent of the population, Muslims 13 percent and Buddhists less than 1 percent, according to 2011 census data, the latest available.

The Indian Constitution allows freedom of religion and the possibility of voluntary conversion. Still, Samrat said that after conversions, the district authorities in Gujarat have failed to issue conversion certificates.

If those certificates are not given, thousands will march to the state capital, Gandhinagar.

“Our demand is let us live with dignity,” he said. “We have not been allowed into the mainstream.”

(Bhavya Dore is a correspondent based in Mumbai)