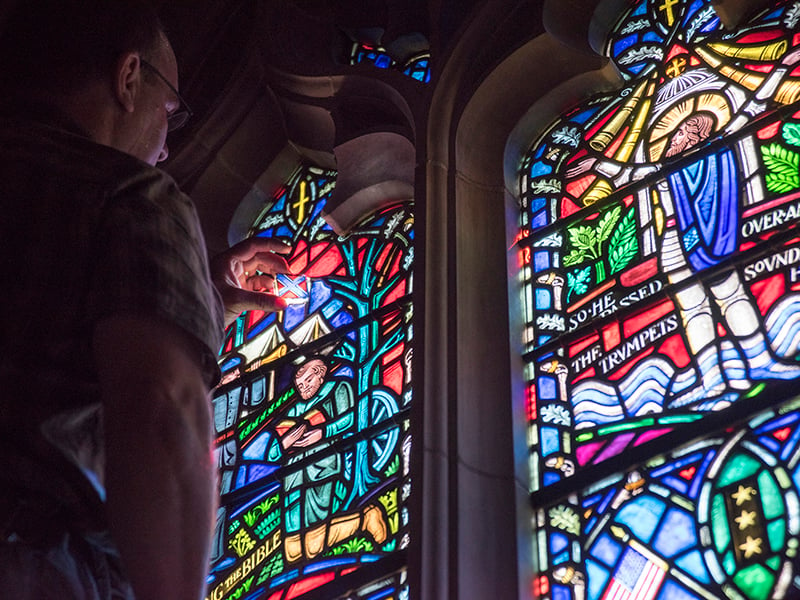 The two panes bearing the image of the flag were replaced last month with red and blue panes to match surrounding glass, said Kevin Eckstrom, chief communications officer for the cathedral. Adjoining panes honoring Confederate generals remain in place but “their long-term future is really very much up in the air,” he said.

Eckstrom said Wednesday (Sept. 28) that he learned of the change in the windows the day it occurred — Aug. 26 — when an architect met with members of a cathedral committee who quickly decided on the specific replacement glass.

“The decision was made, kind of on the fly, that they were happy with the replacement and just go ahead and put them in,” he said. “It wasn’t really a decision to do it under the cover of darkness. It was more the people were there on-site and they decided to just go ahead and make it happen.”

But Eckstrom acknowledged that cathedral officials chose not to make a public announcement after the replacement occurred.

“They decided, rather than further exacerbate tensions around the flag in the windows, to just do it and get it done and move on to the next phase,” Eckstrom said. “They didn’t want the flags themselves to become a distraction from the larger conversation that they’re having around race, which in the cathedral’s mind is much more important than the windows.”

There currently is no sign near the windows explaining the change but one is likely in the future, he said.

Since the cathedral announced in June that it would replace the flag depictions, it has begun a series of events focused on racial justice, including one on the role of the white church and another about black spirituals.

It has planned an Oct. 26 event on the history and context of the Confederate flag, including discussion of the removal of the panes and the current retention of the overall windows honoring Confederate Generals Robert E. Lee and Stonewall Jackson. The side-by-side windows were dedicated in 1953.