(RNS) William Bornhoft is a Catholic who admits that he sometimes cringes at the liturgical novelties he sees at Mass and has himself been tempted to post a complaint or a photo of the offending innovation.

But Bornhoft, a 24-year-old writer from Minnesota, has also seen where that temptation can lead, and he didn’t think he was being especially outrageous when he penned an essay lamenting what he saw as a growing penchant for “liturgy shaming” – that is, furious believers using social media to denounce and target pastors or parishes that in the critics’ eyes have done something beyond the pale.

The impetus for his column at the Catholic website Aleteia seemed to be a cut-and-dried example of a digital mob in action: A Seattle parish had posted a photo album on Facebook showing liturgical dance at Mass, including streamers and the sort of modern flourishes that make traditionalists see red.

Sure enough, another Catholic site shared the album with the intent of making fun of the parish. But the online criticism quickly accelerated “to particularly nasty allegations of heresy and satanic worship,” as Bornhoft put it, plus personal attacks on the looks of the dancers.

It got so bad that the parish deleted its Facebook page entirely, and it all prompted Bornhoft to do some soul-searching.

“When we feel the urge to make a nasty comment or post a scandalous photo of liturgical abuse online, we should ask ourselves whether it’s love of the Church that is guiding our hearts, or a sense of entitled judgement,” Bornhoft wrote in his essay last February, appropriately enough during the penitential season of Lent.

“I’m willing to bet that more often than not, hubris influences how we respond.”

The reaction to his rebuke, however, only seemed to confirm the depth of the passions sparked by the issue and the potency of the new medium of the internet to fuel a debate about a problem that the web itself has helped create.

“Are you seriously saddened that these scoundrels had to shut down their FB page?” said one of many critical commenters on his post. “If they don’t know that they’re doing wrong, we need to tell them so that they can repent,” said another. Wrote yet another commenter: “The time of inaction on the part of the laity is over and if the clergy will not correct themselves then it is up to us to force the issue.”

In a telephone interview, Bornhoft stood by his critique but said he understood the sense of powerlessness that seemed to motivate many liturgy shamers:

“There are a lot of liturgical issues today and they don’t trust that leadership can do anything. So they see liturgy shaming as an important and effective tool we didn’t have before.”

Indeed, diehard traditionalists — who tend to be the main liturgy-shamers — say the stakes are too high and they don’t feel they have a choice.

To be sure, online teasing is not the sole province of conservatives; those with more modern sensibilities often use the internet to make fun of traditionalists who wear especially elaborate regalia, for example. And Protestants can certainly throw shade at the music or architecture or worship styles of another congregation.

But for many old-school Catholics, the liturgical innovations unleashed by the Second Vatican Council in the 1960s are to blame for every measurable decline and perceived ill in Catholicism since that time.

Moreover, since the Mass is the center of Catholic worship and the Eucharist is the holy core of that celebration, anything that appears to diminish the sobriety or seriousness of the liturgy is tantamount to sacrilege and therefore merits strong action. 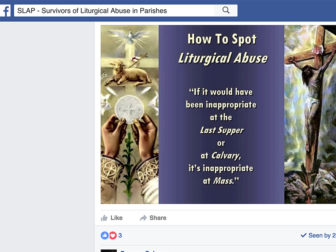 Screen capture of Facebook post on the group page of SLAP – Survivors of Liturgical Abuse in Parishes.

That’s why, in his response to Bornhoft, Joseph Shaw, head of the Latin Mass Society, argued that those who use liturgy shaming are justified, much as those who denounced the sexual abuse of children by clergy were right to do whatever it took to stop the violation of the sacred – in one case children, in another the celebration of the Eucharist.

Exhibit A for the analogy: One of the many Facebook groups dedicated to liturgical whistleblowing is called SLAP, or Survivors of Liturgical Abuse in Parishes, which echoes the name of the leading clergy abuse victims organization, the Survivors Network of those Abused by Priests, or SNAP.

Above all, Shaw said, liturgy shaming works by pressuring church authorities to take action so the perpetrators “will never again gloat over their implied heresy or their liturgical abuses.”

These viral campaigns can on occasion have the intended effect, as they did for the Seattle parish Bornhoft wrote about.

Just last Christmas, for example, a priest in the Philippines was suspended from ministry and forced to apologize after a parishioner’s cellphone video of him on a hoverboard at the end of midnight Mass went viral.

Yet in reality most online campaigns go nowhere and chiefly seem to serve as fodder to bolster traditionalist views that contemporary Catholicism is the Church of Anything Goes.

Hence the many posts about episodes real or legendary: “clown masses” in which the celebrant dresses as a clown, for instance, or a Eucharistic procession in Austria that used a huge focaccia held up with a giant pair of tongs.

Or the photos of the archbishop of Palermo riding a bicycle around his cathedral in April in full vestments before a Mass in honor of athletes. Liturgy shamers were outraged at that one and blamed Pope Francis – who is not a favorite of theirs – for appointing such a disrespectful churchman. The archdiocese didn’t seem to mind and posted the photos on its website.

There are certainly any number of liturgical innovations that can sometimes raise the eyebrows of even open-minded Massgoers – particularly goofy vestments, perhaps, or the burial urn shaped like the iconic Italian coffee pot that sat in front of the altar during the funeral Mass for the scion of the Bialetti coffeemaker clan.

But complaints can also be exaggerated or – no surprise, it’s the internet – based on misinformation.

Back in 2002, when he was the newly appointed archbishop in Milwaukee, Cardinal Timothy Dolan, now in New York, briefly donned a big foam “cheesehead” hat favored by Green Bay Packers fans at the start of his homily. He did it just for a moment because it was opening day for the Packers, and the good-natured Dolan wanted to show he was also a fan of his flock’s hometown favorites.

But the image took on a life of its own on the web and Dolan was excoriated by traditionalist critics for celebrating the Eucharist with the garish hat – which he did not do – during what came to be known as the “Cheesehead Mass.”

That sort of urban legend is a perfect example of what cultural anthropologists call the “context collapse” that has been hastened by the instantaneous information overload created by the World Wide Web, said Daniella Zsupan-Jerome, a professor of pastoral theology at Notre Dame Seminary Graduate School of Theology in New Orleans.

“Because of how information is so easily shared we come across just the ‘byte’ without the proper context that allows us to interpret what it’s really about,” said Zsupan-Jerome, who has a master’s degree in liturgy and writes on the church and digital culture.

“It’s just him with a cheesehead. This context collapse often leads us to erroneous conclusions or conflict.”

Added to that are the other usual suspects in internet addiction: the thrill of being part of the conversation and the chemical buzz of getting a response “whether it’s a thumbs up or getting a comment back that shows someone cares, for better or worse. It’s all gratifying, it gives us a sense of meaning,” Zsupan-Jerome said.

But it’s especially problematic because the context is the church – a community built on doing unto others as you would have them do unto you.

To be sure, complaints about liturgy are not new. Zsupan-Jerome noted that liturgy is not just sacred; it’s also something Christians relate to at a gut level as much as on an intellectual plane. So there will always be sharp and visceral disagreements.

The difference is that now those disagreements can go viral, and the tendency is to do what viruses encourage, which is to gang up on the target.

“That’s where the shame is,” she said. “The shame is not in whatever liturgical dancer was in this video. The shame is in the fact that we as Christians, we Catholics, communicate with each other in ways that are ugly and vitriolic.”

“If our witness to the world is ugliness and shame and vitriol and ridicule and mockery, then that brings shame on our efforts to be authentic evangelizers.”

So what can be done?

Bornhoft said that while he understands the frustration of liturgy shamers, Catholic moral thinking insists that the ends do not justify the means. When legitimate online theological debates lapse into bullying, he said, it’s sinful – which is something faithful Catholics above all should recognize.

“If we can’t all agree that this is wrong then it’s not going to go away,” he said. “So first we have to agree it’s wrong and can be immoral.”