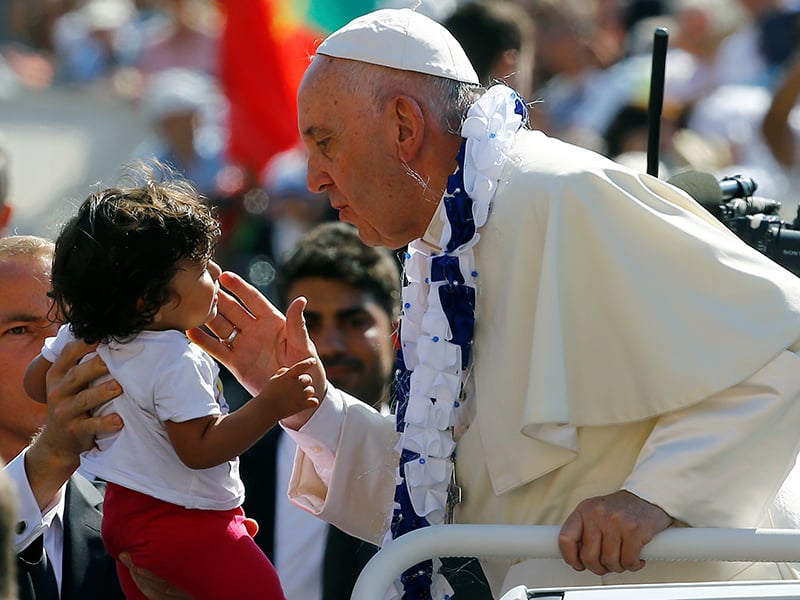 Pope Francis interacts with a child as he arrives for the audience for workers and volunteers of mercy at the Vatican, on Sept. 3, 2016. Photo courtesy of Reuters/Stefano Rellandini *Editors: This photo may only be republished with RNS-POPE-MIGRANTS, originally transmitted on Oct. 13, 2016.

VATICAN CITY (RNS) Pope Francis has made an impassioned plea to the international community to protect the world’s “invisible and voiceless” child migrants who fall prey to prostitution, human trafficking and forced labor when they travel far from home.

In a strongly worded statement released ahead of the World Day of Migrants and Refugees (Jan. 15), Francis said immigration is “growing into a tragic situation of global proportions” and children are being exploited by the “unscrupulous” as they flee violence and poverty.

“I feel compelled to draw attention to the reality of child migrants, especially the ones who are alone,” the pope said.

“I ask everyone to take care of the young, who in a threefold way are defenseless: They are children, they are foreigners, and they have no means to protect themselves.”

The pope said children were the first to suffer and were at times subjected to physical torture and violence as well as psychological aggression that “left indelible scars.”

“They are invisible and voiceless,” he said on Thursday (Oct. 13). “Their precarious situation deprives them of documentation, hiding them from the world’s eyes.”

Since he was elected in 2013, Francis has often highlighted the plight of migrants and refugees and has frequently urged world leaders to do more to welcome those migrants, particularly children, who were escaping war and poverty.

According to UNICEF, there are 65 million children around the world fleeing poverty, violence and the impact of climate change in search of a better life. Francis made a heartfelt appeal for long-term solutions and urged the international community to end the conflict and violence that force them to flee their troubled countries.

The pontiff has demonstrated his support for migrants on several occasions and regularly sends the Vatican almoner, Archbishop Konrad Krajewski, to migrant camps in Rome to distribute food to those in need.

In April, during a visit to the Greek island of Lesbos, where migrants landed after making dangerous sea crossings from Turkey, the pope took 12 Syrian migrants with him back to Rome. He later invited the Syrian families to lunch at the Vatican.

Earlier on Thursday the pope received 1,000 pilgrims — most of them German Lutherans — at the Vatican and urged them to seek unity through charity. The Lutherans had an audience with the pope as part of ecumenical preparations to mark the 500th anniversary of the Protestant Reformation.