(RNS) Americans, and white evangelical Christians in particular, have often distinguished themselves from their cynical Old World cousins by maintaining a high bar for the personal moral behavior of their elected officials.

They also tended to link such rectitude to the ability to carry out their public duties effectively.

But whether it is the ugly language and behavior often displayed by Republican candidate Donald Trump, or some other factor, U.S. voters — especially those same evangelicals — appear to have vanquished their inner Puritan and are now far more accepting of sinning politicians.

That’s the upshot of a survey released Wednesday (Oct. 19) showing 61 percent of Americans now say that “immoral personal behavior does not preclude public officials from carrying out their public or professional duties with honesty and integrity.”

Yet what’s most notable in the survey by the Public Religion Research Institute and the Brookings Institution is that white evangelical Protestants have shifted their views more dramatically than any other group:

Today, the PRRI survey shows, 72 percent of white evangelicals say an elected official “can behave ethically even if they have committed transgressions in their personal life,” a 42-point jump from 2011, when only 30 percent agreed with that statement. 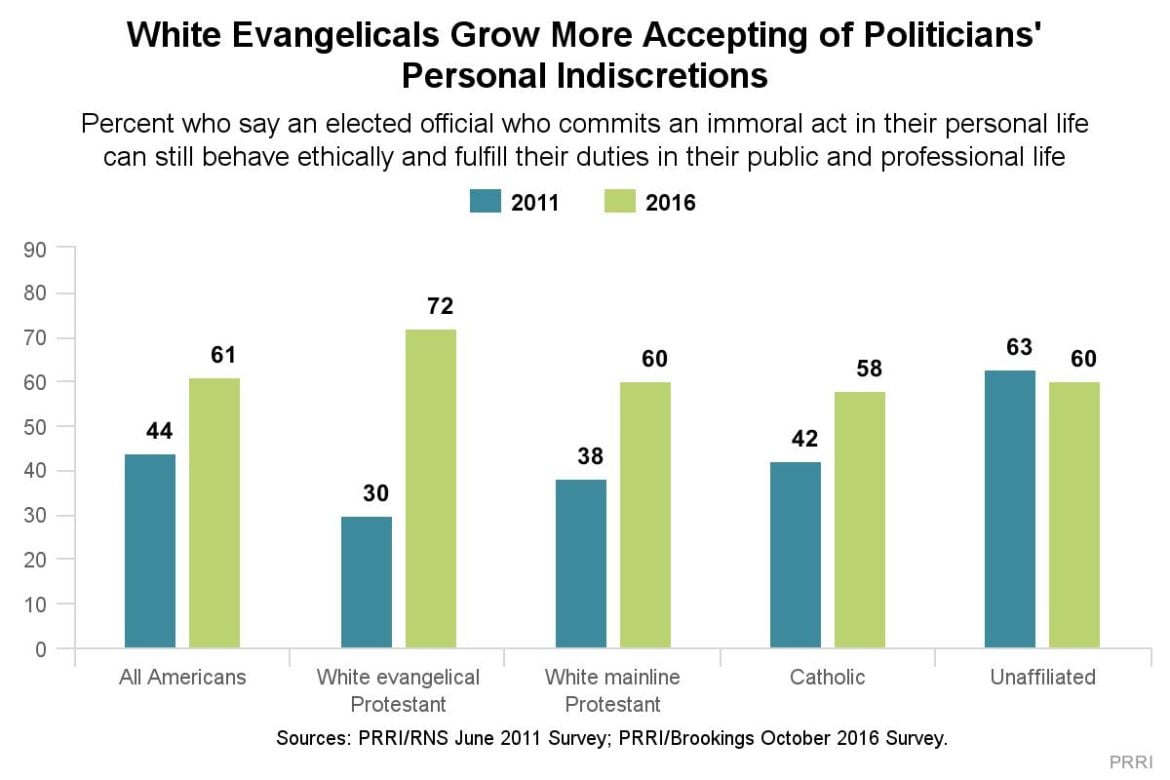 This chart of data from the PRRI/Brookings survey released Oct. 19, 2016, shows a sharp change in the public’s acceptance of “personal immorality” by elected officials.

The data also show that those same conservative Christians, viewed as the core constituency for the Republican Party, continue to give strong backing to Trump, with nearly 7 in 10 of them saying they will vote for the GOP nominee over his Democratic rival, Hillary Clinton.

Clinton herself has received low marks for honesty and trustworthiness from voters as she has had to answer ongoing questions about her use of a personal email account while she was secretary of state and the funding of the private charitable foundation she started with her husband.

She has also been dogged by questions about the propriety of earning huge speaking fees from various groups, among other things.

But the striking fact about the latest PRRI poll – which also gave Clinton a huge 51-36 point advantage among likely voters ahead of tonight’s third and final debate – is the shift in views among the very Christian conservatives who are supporting Trump.

“This new data indicates that white evangelicals are not just turning a blind eye to Trump’s many indiscretions, but they are warping their principles to accommodate their preferred candidate,” said Robert Jones, head of PRRI and author of “The End of White Christian America,” an analysis of the recent political and cultural transformations in the U.S.

“Rather than standing by principle and letting the chips fall where they may, they’ve now fully embraced a consequentialist ethic that allows the ends to justify the means,” Jones added.

Many evangelical critics of Trump have said that there is no way Bible-believing Christians could support the GOP candidate, who has been married three times and bragged about his sexual exploits and penchant for groping women.

Those critics also say that accepting Trump’s character flaws undermines the very arguments used against Democrats such as former President Bill Clinton, who was blasted by Christian conservatives after revelations that he had an affair with a White House intern.

“This is what compromising your convictions for political expediency looks like in a chart,” the Christian writer and Trump critic Rachel Held Evans tweeted in response to the new survey.

But in a split that could portend a long-lasting schism in the old religious right, other evangelicals are supporting Trump by arguing that Christians need a strong leader who can protect them from secularizing trends in America life.