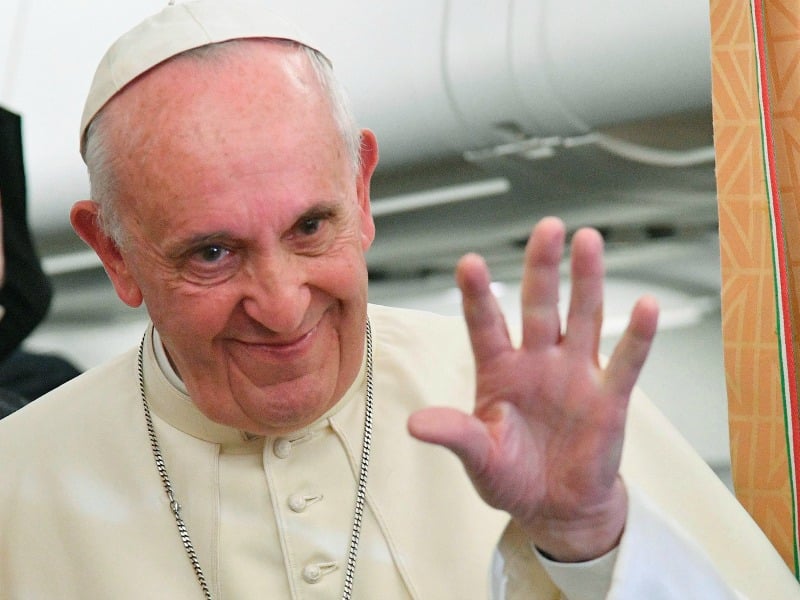 Pope Francis gestures as he speaks to journalists on his flight Oct. 2, 2016, back to Rome following a visit in Georgia and Azerbaijan. REUTERS/Luca Zennaro/Pool
October 28, 2016
David Gibson 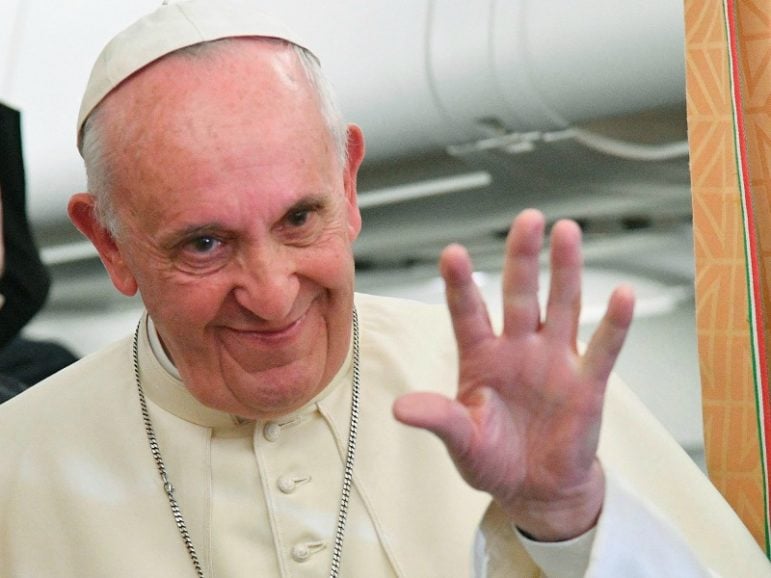 Pope Francis gestures as he speaks to journalists on his flight Oct. 2, 2016, back to Rome following a visit in Georgia and Azerbaijan. REUTERS/Luca Zennaro/Pool

(RNS) Pope Francis leaves on Monday (Oct. 31) for an overnight trip to Sweden, a historically Protestant country that today is one of the most secular in the world.

The visit is to mark the start of observances of next year's 500th anniversary of the Reformation, which traditionally dates from Oct. 31, 1517, when Martin Luther nailed his 95 Theses to the door of a German cathedral. 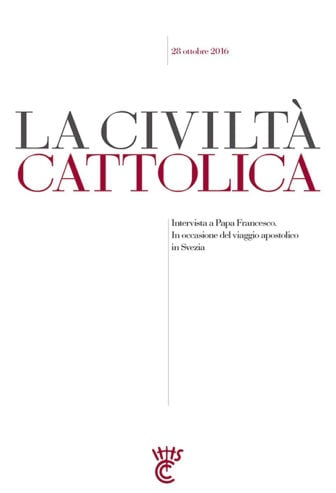 On Friday (Oct. 28), the Jesuit journal Civilta Cattolica published an interview that Francis -- who is also a member of the Jesuit order -- gave to a Swedish Jesuit, the Rev. Ulf Jonsson.

In the interview the two discuss a wide range of topics, from relations between Catholics and Protestants to being a minority faith in a secular culture and the "terrorism" of gossip.

Here are excerpts from their exchange:

On his goals for the Sweden trip and relations with Lutherans:

"I can think of only one word to say: to come close. My hope and expectation is that of coming closer to my brothers and sisters. Closeness does all of us good. Distance, on the other hand, makes us bitter. When we are distant, we close within ourselves and we become individual entities, incapable of encountering each other. We are held back by fears. We need to learn to transcend ourselves to encounter others. If we do not do this, we Christians, too, become sick because of our divisions. My expectation is that of being able to take a step of closeness, of being closer to my brothers and sisters in Sweden."

On the best means to promote unity among Christians:

"[T]heological dialogue must continue, even if it will not be easy. Personally, I believe that enthusiasm must shift towards common prayer and the works of mercy -- work done together to help the sick, the poor, and the imprisoned. To do something together is a high and effective form of dialogue. I also think about education. It is important to work together and not in a sectarian way. There is a policy we should have clear in every case: to proselytize in the ecclesial field is a sin. Benedict XVI told us that the Church does not grow by proselytism, but by attraction. Proselytism is a sinful attitude. It would be like transforming the Church into an organization. Speaking, praying, working together: this is the path that we must take. Look, in ecumenism the one who never makes a mistake is the enemy, the devil. When Christians are persecuted and murdered, they are chosen because they are Christians, not because they are Lutherans, Calvinists, Anglicans, Catholics or Orthodox. An ecumenism of blood exists.

On what he has called the "terrorism of gossip":

"Yes, there is an internal and underground terrorism that is bad habit to root out. I describe the bad habit of murmurings and gossip as a form of terrorism. It is a form of deep violence that we all have available in our soul and it requires a profound conversion. The problem with this terrorism is that we can all implement it. Every person is capable of becoming a terrorist simply by using the tongue. I don’t speak of the quarrels that are done openly, like wars. I speak about a sneaky terrorism that you do by throwing words like 'bombs' and that do a lot of evil. The root of this terrorism is original sin and it is a form of crime. It is a way to gain space for yourself by destroying the other. A deep conversion of the heart is necessary, then, to overcome this temptation, and we need to examine ourselves a lot on this point. The sword kills so many people, but the tongue kills more, the Apostle James says in the third chapter of his Letter. The tongue is a small member, but it can develop a fire of evil and burn all our life. The tongue can be filled with deadly poison. This terrorism is difficult to subdue."

On those who use religion to foment violence:

"There are idolatries connected to religion: the idolatry of money, of enmities, of space greater than time, the greed of the territoriality of space. There is an idolatry of the conquest of space, of dominion, that attacks religions like a malignant virus. And idolatry is a false religion, it is wrong religiosity. I call religion 'an immanent transcendence,' namely a contradiction. But the true religions are the development of the capacity that humanity has to transcend itself towards the absolute. The religious phenomenon is transcendent and it has to do with truth, beauty, goodness and unity. If there isn’t this openness, there is no transcendence, there is no true religion, there is idolatry. The opening to transcendence then absolutely cannot be a cause of terrorism, because this opening is always united to the search for truth, beauty, goodness and unity."

On the regions of the world where faith will flourish in the future:

"This is a question tied to space, to geography. I have an allergy to talking about spaces, but I always say that you see things better from the peripheries than you do the center. The liveliness of ecclesial communities does not depend on space, on geography, but on spirit. It is true that the young churches have a fresher spirit and, on the other hand, there are aging churches, churches that are a bit asleep, who seem to be only interested in preserving their space. In these cases, I don’t say that the spirit is missing. It is there, yes, but it is enclosed in a structure, in a rigid way, fearful of losing space. In the churches of some countries, you see precisely that this freshness is missing. In this sense, the freshness of the peripheries gives more space to spirit. We need to avoid the effects of a bad aging of churches. It does us good to reread the third chapter of Joel, there where he says that the elderly shall dream dreams and the young will see visions. In the dreams of the elderly, there is the possibility that our young people have new visions, have a future again. Instead, the churches at times are closed in programs, in programming. I admit it. I know they are needed, but I have a hard time putting hope into an organizational flowchart. The spirit is ready to push us, to go forward. And the spirit is in the ability to dream and to ability to prophesy. This for me is the challenge for all the churches ... The young church rejuvenates more when the young people talk with the elderly and when the elderly know to dream great things, because this ensures they prophesy. If the young don’t prophesy, the church lacks air."

On visiting secular Sweden and the loss of religious belief:

"It is not losing something, but is about not adequately developing a capacity for transcendence. The path of transcendence gives place to God, and in this the little steps are even important, even that of being an atheist to being an agnostic. The problem for me is when one is closed and one considers their life perfect in itself, then one closes in on oneself without the need for a radical transcendence. But to open others to transcendence there’s no need to use so many words and discourses. Whoever lives transcendence is visible. He or she is a living witness. In the lunch that I had at Krakow [at World Youth Day in July] with some young people, one of them asked me: 'What must I say to my friend who does not believe in God? How do I convert him?' I answered him: 'The last thing that you must do is to say something. Take action! Live! Then, seeing your life, your witnessing, the other one will perhaps ask you why you live thus.' I am convinced those who don’t believe or don’t seek God, maybe haven’t felt the restlessness that comes from seeing a witness. And this is very tied to affluence. Restlessness is rarely found in affluence."

On the role of a tiny Catholic community in a country like Sweden:

"I see a healthy coexistence where each one can live their faith and express their witnessing living an open and ecumenical spirit. You cannot be Catholic and sectarian. We must strive to be together with others. 'Catholic' and 'sectarian' are two words in contradiction. This is why at the beginning I wasn’t planning to celebrate a Mass for the Catholics on this trip. I wanted to insist on an ecumenical witness. Then I reflected well on my role as pastor of a flock of Catholics who will also come from other countries, like Norway and Denmark. So, responding to the fervent request of the Catholic community, I decided to celebrate a Mass, lengthening the trip by a day. In fact, I didn’t want the Mass celebrated on the same day and in the same place as the ecumenical encounter to avoid confusing plans. The ecumenical encounter is preserved in its profound significance according to a spirit of unity, that is my desire. This has created organizational issues, I know, because I will be in Sweden for All Saints Day, which is important here in Rome. But in order to avoid misunderstanding, I wanted it to be so."