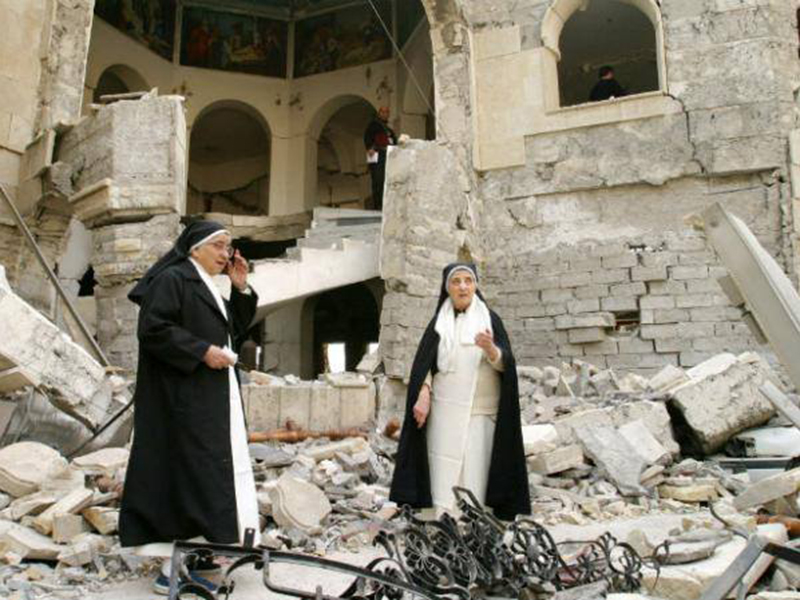 Dominican Sisters recount the harrowing escape from ISIS in Iraq, which resulted in the deaths of 23 elderly nuns from heart attacks. Photo courtesy of Order of Preachers, via Facebook
November 1, 2016
guest

(RNS) The following letter was written by the Dominican Sisters of St. Catherine of Siena living in Irbil, Iraq, and sent to their supporters across the world. RNS was granted permission to publish it. It has been edited lightly for clarity.

We write to you on All Saints Day to update you on the situation in Iraq. Remembering the Christians who were killed in 2009 while attending Mass at Our Lady of Deliverance Church in Baghdad. That was the beginning of harder times to all Christians in Iraq.

It has been two years and four months since we left Nineveh Plain. It has been long time of displacement, of humiliation, of exile. However, people always lived in hope of God’s mercy to return and go back home. We believed that God will not fail us.

Nineveh operations started on Oct. 17th. Since then, people are following the news of the army advancing in Nineveh Plain, every single minute. There are many Christian militants among the army, and some of them we know. So, they have been sending us photos of our Christian towns that are being recaptured.

The photos are so very disturbing, as they are showing our churches, homes, schools, and convents, hospitals burned and destroyed after they had been looted. We were shocked that our cemeteries were dug: Is it possible that even the dead did not survive their cruelty!

Obviously, we are following that with mixed feeling. On the one hand, we are grateful that our towns are eventually being recaptured. On the other hand, it is heartbreaking to see the damage that ISIS had caused. We knew that when we left, our towns will not be the same when we return. But, we were hoping to be comforted by seeing, at least, our houses standing, which would encourage us to return.

The reality is that ISIS has used our houses to hide tunnel entrances and, store weapons. Additionally, they planted bombs in houses ready to explode as soon as the door opens, and mines are everywhere in the land. Some of us, who see the houses still standing might be thankful to have shelters, but at the same time, we fear that our houses might be a trap for us.

So far, only some people have returned to check on their homes and they have come back shocked by what they have seen. It will not be possible to return to any of the liberated towns until the government announces it is safe.

The urgent question that people are currently asking is: To whom will we, as people and land, belong? This is because there are different forces that are fighting to clean the land. There are Kurdish army, Iraqi army, Nineveh Plain Protection Units, and others. Hopefully, our lands will not be disputed land. That is another issue to be worried about.

However, that is one of many questions. People are wondering how to go back as there are no basic physical and organizational structures and facilities (e.g., buildings, roads, and power supplies) in the damaged towns. In a country where there is no insurance, people wonder who is going to help them. Moreover, what guarantees are there that when people return, the place will be safe.

As sisters, we are worried about the legacy of our land. We do not want our heritage to be wiped up when process of cleaning the place happens. We hope someone will help us to document history.

In the midst of what is happening, on Oct. 21, our sisters in Kirkuk with other people in the neighborhood, among them a number of internally displaced students, lived a special, painful and powerful experience.

These students were staying in Kirkuk because they studied at Mosul University, which was relocated in Kirkuk after ISIS captured Mosul in 2014. While people were occupied with the news, a number of ISIS men unexpectedly entered the city of Kirkuk, which is 100 kilometers from Irbil. While the Iraqi army was fighting them, they took shelter in one of the student houses across the street where seven Christian girls lived.

The girls were able to hide for long hours under the beds. But, eventually, and with the help of many people of good will, they managed to escape and leave the house, while members of ISIS were in the next room. Everybody considered that a miracle.

The surviving girls talked later about their experience, and they assured us Christians that God was there and they survived because of their families’ and friends’ prayers. At the same time, it is obvious that they are shocked, and they are afraid of going back to Kirkuk, as they believe that the city is not safe anymore.

To say the truth, it looks like we are living in a liminal space. On one hand you see people frustrated and want to leave the country, on the other hand, you find people who are eager to return and rebuild their houses no matter how damaged. Some people are tired of the unfinished situation, and some people are ready to go back and start from zero. We are just waiting for the “decree of Cyrus” (that allowed the Jews to return from exile) to be announced again allowing us to return and build again our churched and houses.

Thank you for being with us, we continue to update you. Pray for us. We count on your prayers.