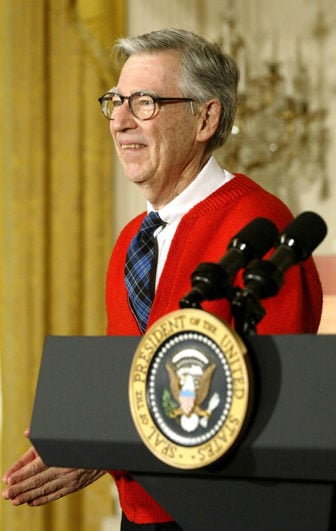 Children’s television icon Mister Rogers accepts applause in the East Room of the White House on April 3, 2002 during the launch of the PBS (Public Broadcasting Service) national campaign to promote children’s literacy. Photo courtesy of Reuters *Editors: This photo may only be republished with RNS-RIESS-OPED, originally transmitted on Nov. 9, 2016.

(RNS) I scarcely slept last night. Like many of you, I am shocked and devastated by what our country has just done.

Earlier this morning I had to explain to my daughter that after she went to sleep last night, a bully became the leader of the free world — a man who has taunted people like her, people who have disabilities.

A man who has boasted of sexually assaulting women.

A man whose disdain for immigrants and people of color has no place in a land that was built by hardworking immigrants.

A man who has zero experience in public service and has only ever cared about enriching himself, whether his advancement came from exploiting his workers or refusing to pay nearly a billion dollars in taxes.

It is a terrible feeling to wake up in this America, the America that has forgotten that when we sing our unsingable national anthem, it always ends with a question mark:

Oh, say! does that star-spangled banner yet wave
O’er the land of the free and the home of the brave?

And that is a question that can only be answered by us, in every generation, as we realize that our freedoms are a hard-won privilege and not a given. Will we continue to be the land of the free and the home of the brave?

It’s not a foregone conclusion.

What I told my daughter this morning is that it is up to us. And the first step is to remember some wise advice that Fred Rogers’ mother once gave him when he was young and afraid. Mister Rogers later wrote:

I was spared from any great disasters when I was little, but there was plenty of news of them in newspapers and on the radio, and there were graphic images of them in newsreels.

For me, as for all children, the world could have come to seem a scary place to live. But I felt secure with my parents, and they let me know that we were safely together whenever I showed concern about accounts of alarming events in the world.

There was something else my mother did that I’ve always remembered: “Always look for the helpers,” she’d tell me. “There’s always someone who is trying to help.” I did, and I came to see that the world is full of doctors and nurses, police and firemen, volunteers, neighbors and friends who are ready to jump in to help when things go wrong.

After this traumatic election, look for the helpers. Look for the people who serve others and stand up to bullies. Look for the quiet heroes who are as committed to preserving the rights of their Muslim neighbors as they are their own.

As Mister Rogers taught us, look for the helpers.

The next step is harder: Become a helper yourself. It’s worth saying again, every day if necessary: “The only thing necessary for evil to triumph is for good people to do nothing.” We will, as Dumbledore once told Harry Potter, sometimes have to choose between what is right and what is easy. When others are skilled in “spreading discord and enmity,” we stand together. We stand up for each other. We uphold the common good.

Because if we don’t, the consequences are unthinkable.