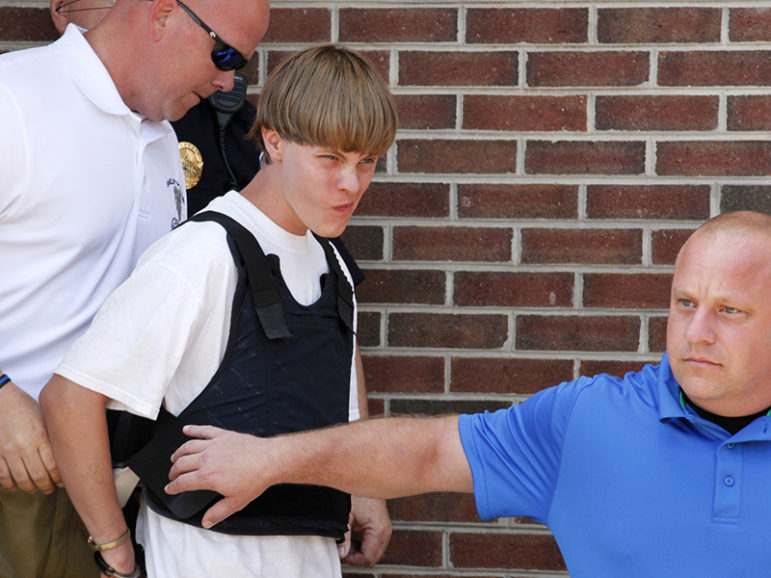 Police lead suspected shooter Dylann Roof, 21, into the courthouse in Shelby, N.C., on June 18, 2015. Roof, a 21-year-old with a criminal record, is accused of killing nine people at a Bible study meeting in a historic African-American church in Charleston, S.C., in an attack U.S. officials are investigating as a hate crime. REUTERS/Jason Miczek

CHARLESTON, S.C. (Reuters) A federal judge has ordered an evaluation into whether accused white supremacist Dylann Roof is competent to stand trial for the fatal shootings of nine people at a historic black church in Charleston, S.C., last year.

U.S. District Judge Richard Gergel on Tuesday (Nov. 8) also postponed jury selection from this week until Nov. 21 to allow time for the competency issue to be settled.

“The Court is mindful that this delay in jury selection may be disappointing to some, but it is the Court’s duty to conduct a fair trial and follow procedures which protect the legal rights of the defendant,” Gergel said in a one-page order.

Gergel said he would rule on the competency of the 22-year-old Roof to stand trial by Nov. 18, after a hearing on the matter.

Roof’s lead defense attorney, David Bruck, declined to comment in an email to Reuters. Federal prosecutors and a lawyer for Roof’s family could not immediately be reached.

The final stage of jury selection had been set to begin on Monday at the U.S. courthouse in Charleston. But Gergel unexpectedly halted proceedings to hold a closed-door hearing with Roof and his lawyers.

Roof, who is accused of holding white supremacist views, faces 33 federal counts of hate crimes, obstruction of religion and using a firearm in a violent crime after he opened fire during a Bible study session at Emanuel African Methodist Episcopal Church in June 2015.

He also faces the death sentence in a state murder trial scheduled for next year.

Prosecutors say Roof planned the attack for months, singling out victims who were black and elderly. At the federal trial, they plan to present racist manifestos they say he wrote, seeking to incite a race war.