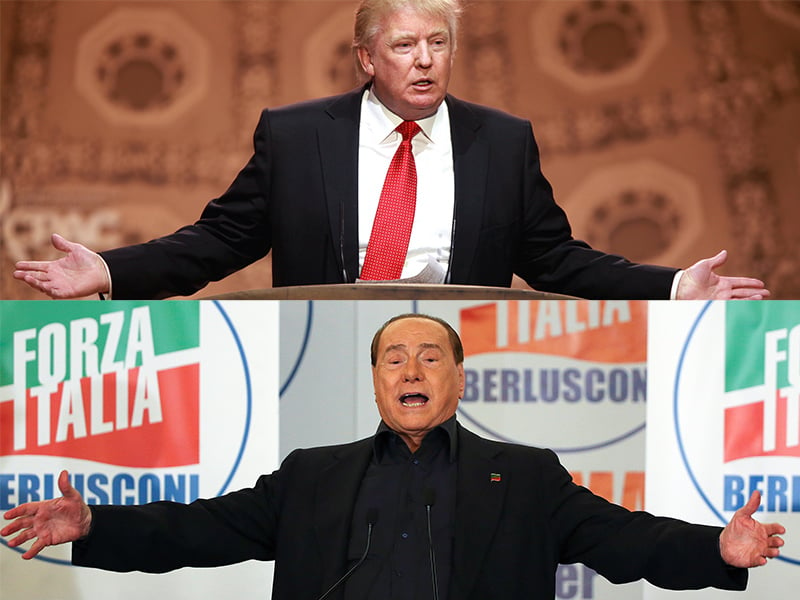 (RNS) Donald Trump’s victory in the 2016 presidential election has few parallels in the history of contemporary politics in the Western world.

But the closest one is familiar to me: Silvio Berlusconi, the media tycoon who was elected prime minister of Italy -- my homeland -- for the first time on March 27, 1994 and who served four stints as prime minister until 2011.

Berlusconi in effect remained the pivot of Italian politics for almost 20 years, until he was forced out and lost influence because of lurid revelations of relationships with a number of women (one of them an underage girl) and charges of prostitution and showgirls performing striptease acts dressed as sexy nuns and nurses -- what Italians referred to as "bunga bunga" parties.

One can only guess what fate awaits Trump’s sudden and potentially unstable political career. But it is fascinating -- and instructive -- to list the similarities with Berlusconi, not least their interplay with the prevailing religious culture.

In addition, both came to politics late in their lives, both after surviving the near collapse of their businesses. The arrival in the public arena for both men was also marked by a revolution in the language they used, in their handling of the media, and by their contempt for “political correctness.”

They also both emphasized the “genius” of the businessman over and against the alleged dysfunction of career politicians and politics in general.

And Berlusconi and Trump appealed to similar constituencies forgotten by the left and by a progressive culture perceived as allied with the establishment: blue-collar workers; an undereducated workforce at the mercy of the forces of globalization and the rise of the service economy; and “nostalgics” for a long-lost Christian nation where Christianity was a code for public (not personal) morality at the service of civil religion.

Moreover, both Berlusconi and Trump have a fascination with Vladimir Putin’s nationalism and strong leadership.

Berlusconi had a real political insight about the need to keep Russia in dialogue with the Western world through an alliance between Russia and NATO. And Berlusconi and Putin developed a friendship -- or whatever “friendship” might mean in that context: according to emails published by WikiLeaks, in 2010 Putin presented Berlusconi with a large bed. It will be interesting to see how far Trump develops his relationship with Putin.

Yet for all the similarities, there are also some interesting differences.

Berlusconi, for example, did not try to take over an existing political party, as Trump did with the GOP. Rather, after seeing the resistance of Italy’s center-right parties to unite under his aegis in an anti-leftist front, Berlusconi in three months built his own party and won the elections.

Berlusconi ran against the liberal establishment media, but he could also count on his own media empire (especially national television channels and newspapers) for good press.

Trump, on the other hand, fought with Fox News as much as he benefited from its coverage.

The most important difference is that Berlusconi understood, back in 1993-1994, that the end of the Cold War had left the left-wing parties and intellectuals in Italy without a message, without a culture, and with a lot to answer for.

In that void, the anti-communist and free-market economy appeal that was a key part of Berlusconi’s message in his first few years was sufficient for a lot of Italian Catholics to buy the entire package.

Berlusconi certainly exploited the fears of many Italians over immigration and the cultural and religious diversification of Italy and Europe. But he was always careful not to exploit racist sentiment as overtly as Trump. Berlusconi’s use of Islamophobia, for example, was subtler and it was mostly outsourced to his allies (like the Northern League).

As for Christianity, in Catholic (if nominally) Italy, Berlusconi could not count on the key evangelical Protestant bloc that supported Trump.

But Berlusconi did enjoy the support, as Trump did with the religious right, of the old guard institutional Catholic Church -- sympathetic bishops and many leaders in the Roman Curia.

The most substantive difference with Trump from a political-religious point of view was the absence of abortion politics from Berlusconi’s message.

The post-war political unity that Catholics had long found in the Catholic-dominated Christian Democrat party was gone when Berlusconi arrived on the scene. But for many Italian Catholics and clergy the most important factor behind their support for Berlusconi was anti-Communism, not the divide between the “pro-life” and “pro-choice” camps that we find in the U.S.

It is true that Berlusconi promised Italian Catholics and the Italian Catholic Church that he would stand against the liberal-secular culture and its “biopolitics,” especially on same-sex unions, euthanasia, and medically assisted procreation.

But Berlusconi knew that abortion laws in Italy (stricter than in the U.S. and approved by a national referendum, not the courts) still have the support of the vast majority of Italians.

Berlusconi took pride in the fact that he went to a Salesian school and saw himself as culturally Catholic, and in the Italian context that was enough. Whatever his personal moral shortcomings, Berlusconi had a circle of people taking care of Catholic issues (especially maintaining the Catholic Church’s privileges in Italy) and relations with the Vatican.

That made Berlusconi more acceptable to the church than, for example, the center-leftist Romano Prodi (the only one who defeated Berlusconi twice in elections) who called himself a “grown-up Catholic” -- that is, not one who would take orders from bishops. That sort of independence angered many in the hierarchy.

Then again, Berlusconi did not have to deal with a pope like Francis, who was elected in 2013, two years after Berlusconi exited the stage.

But Trump, who famously picked a fight with the pontiff during this year's campaign, doesn’t seem bothered by what anyone thinks and will likely only visit Francis in the Vatican once, at most, in what is traditionally little more than a photo op.

The hierarchy in the U.S. is the Catholic leadership that Trump will have to deal with, and while Francis is starting to appoint bishops and cardinals who would challenge Trump more directly, that shift could take years to take effect.

In the meantime, Trump knows that he won the Catholic vote by a strong 52-45 percent margin over Hillary Clinton, even if that was buoyed by white Catholics who are more conservative than the Latinos who went heavily for the Democrat.

And he will deliver on some of the key items that the American bishops want -- ending the dreaded contraception mandate and appointing judges who will, to one degree or another, limit abortion rights.

That’s enough for Trump. The reality is that he may be gone from the White House before there are enough new American bishops who reflect the broader agenda and attitude of the pope in Rome, and long before their leadership could begin to influence the flock.

As long as Trump isn’t as contentious with the U.S. bishops as he was with the Roman pontiff, he will likely be as successful as Berlusconi was with the church.

And white evangelicals gave Trump record support, over 80 percent, so he seems set with that bloc.

The problem is that Berlusconi’s cozy relationship with the Catholic Church in Italy wound up being a disaster for the institution’s credibility. Italians saw it as a cynical alliance, and when Berlusconi fell, so too did the hierarchy’s reputation.

That’s a parallel American Christians may also want to keep in mind.