WASHINGTON (RNS) Anna Schalk finds herself weeping each time she enters an Orthodox church and gazes at the flat, colorful icons of Jesus and the Virgin Mary.

The impressionistic painter had long been drawn to spiritual images but this year she took a big step beyond her own artistic and religious traditions.

At a summer workshop, she created an icon of her own, alongside other students who spent a week together with the same mission.

“It’s like a meditative experience,” said the retired pediatric occupational therapist, a Roman Catholic, comparing her work on the icon to partaking in Communion. “When I receive the host, it’s similar.” 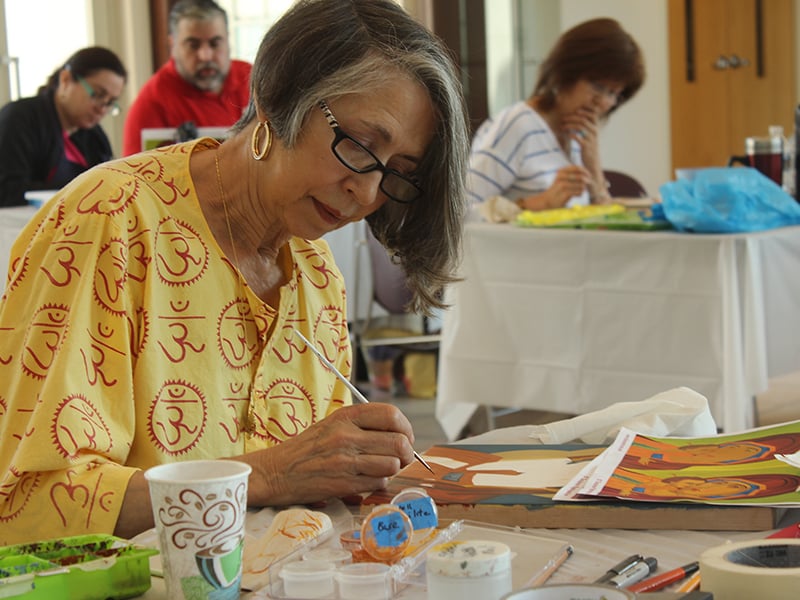 Anna Schalk of Alexandria, Va., works on an icon during a class at St. Sophia Greek Orthodox Cathedral in Washington, D.C., in June 2016. RNS photo by Adelle M. Banks

Schalk, of Alexandria, Va., is part of a growing multifaith movement of people who have been drawn to the art and the spirituality of iconography, taking short-term classes with experts, who often travel from abroad to lead U.S. students in the craft they say is more about seeking the divine than painting an image.

In fact, experts say icons are “written,” rather than painted.

Theodoros Papadopoulos, who traveled from Greece to teach the class, recounted in the first day’s lesson the history and meaning of iconography.

“The Byzantine Orthodox iconography is not just an ‘art,’ it’s a sacred art,” he said. “It is not ‘painting,’ it’s theology. It is not ‘artistic expression,’ it is expectation of salvation.” 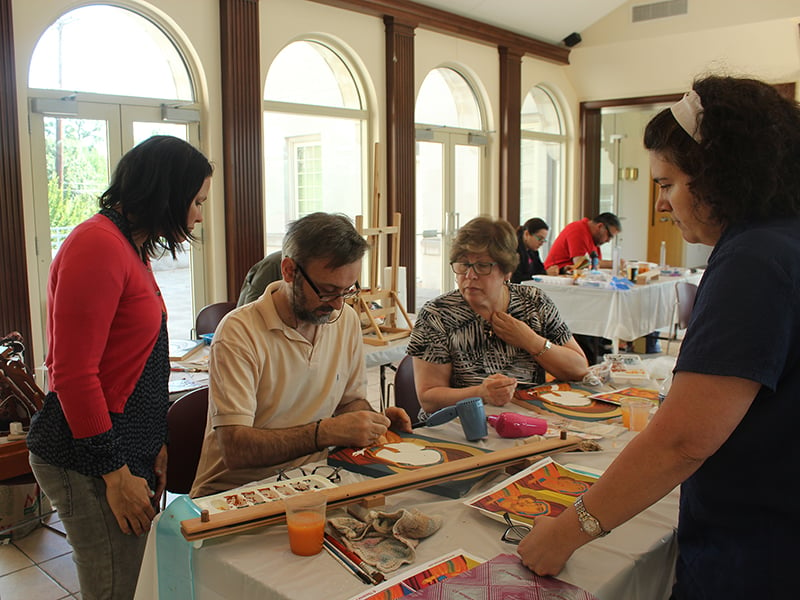 David Morgan, a religion scholar and art historian at Duke University, said the iconography tradition, which dates to the early centuries of Christianity, is designed to be distinct from more naturalistic art, which became more common in the Renaissance period.

The flatness of the image, its stillness, the large eyes of its figures and the often symmetrical style are all intentional ways of distinguishing between the ordinary world and a heavenly realm.

“The Byzantine Orthodox iconography is not just an ‘art,’ it’s a sacred art,” said iconographer Theodoros Papadopoulos. “It is not ‘painting,’ it’s theology. It is not ‘artistic expression,’ it is expectation of salvation.”

The artistic process taught in iconography classes is bathed in prayer, both individual and corporate.

Before his history lesson, Papadopoulos began the workshop Schalk attended with an iconographer’s prayer. It was printed on a sheet for the students to read together before picking up their paintbrushes to “write” an image of the Christ child embracing his mother.

“Lord Jesus Christ, God of all, enlighten us, imbue the soul, the heart, the intellect of Your servant,” they prayed, standing before easels in a bright, window-filled room steps away from the sanctuary of St. Sophia Greek Orthodox Cathedral.

Experts say the growth in interest — and diversity of religions involved — has been building over the last couple of decades.

Lynette Hull, an iconographer with the Prosopon School of Iconology, a “school without walls” that offers iconography classes, said a six-day intensive course was started by school founder and Russian native Vladislav Andrejev 28 years ago.

Hull, a Presbyterian convert to Orthodoxy, thinks icons are attractive to people in an age that is more secular and more image-driven than the past.

“Every person sees hundreds of images a day and the icon is beginning to speak to people in a way that it hasn’t before,” Hull said. “Not everybody who takes the class converts to Orthodoxy. However, it does speak to and lead people into a spiritual journey.” 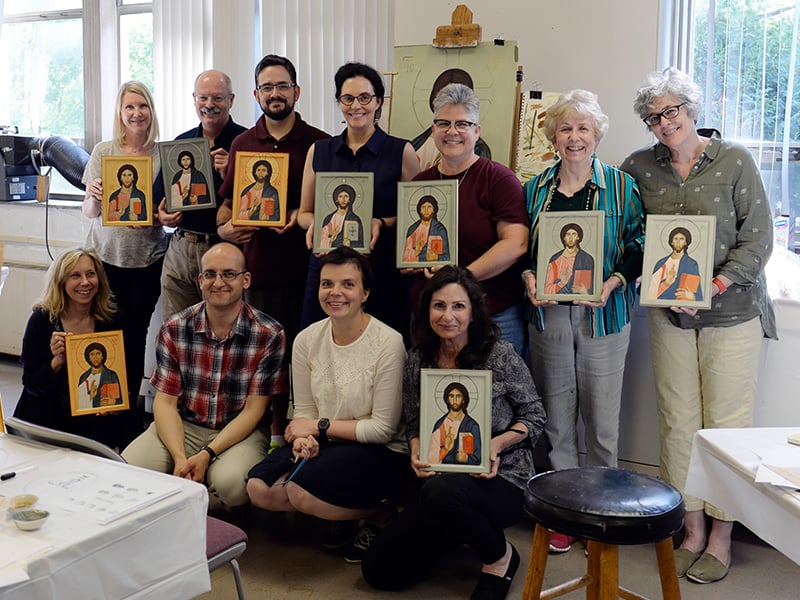 Within weeks of the St. Sophia class, which was held for its second year, Wesley Theological Seminary, a United Methodist-affiliated school a mile and a half away, also held an iconography class taught by Philip Davydov, a Russian iconographer.

“We mostly do this in some circles which are non-Orthodox,” Davydov said of the workshops that are limited to 14 people, allowing time for enough one-on-one interaction with each student. 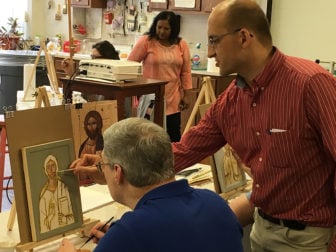 In the class at St. Sophia, students often kept their voices low during brief interviews about their experience, so as not to disturb others who were creating their icons. Some say the process helps them to become more patient while others say it motivates them to concentrate on the needs of others.

“To me it’s a prayer,” said Lara Neri, an artist and Byzantine Catholic from Dallas, of the dozens of hours spent in the class. “It’s probably the most intense prayer that I do.”

She prayed for friends whom she had emailed in advance to ask if they had specific requests.

“While I’m painting, I’m praying to commit them and their needs to the heart of Mary and Jesus,” she said. 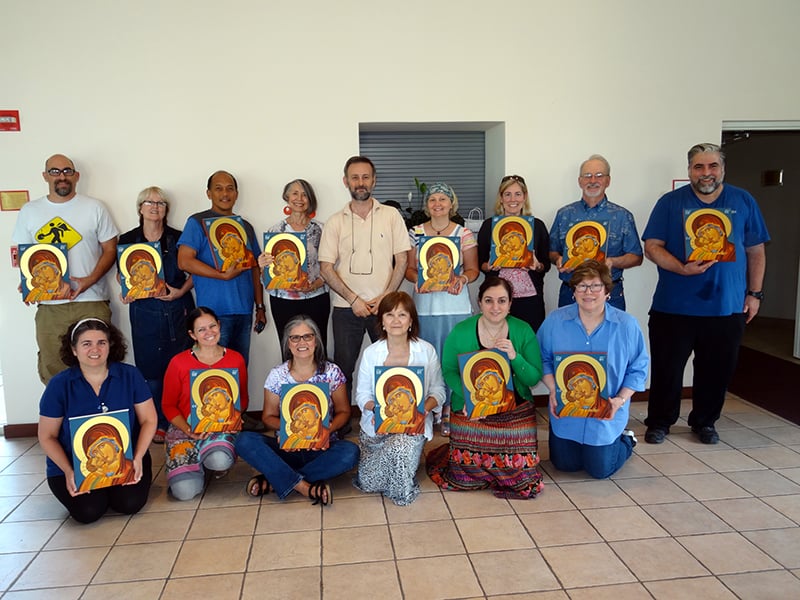 Students show off their finished paintings after the workshop at St. Sophia Greek Orthodox Cathedral in Washington, D.C. Photo courtesy of Theodoros Papadopoulos

Hundreds of these intensive classes, which Hull said often cost from $500 to $800, are held across the country. She estimated that the Prosopon School’s Andrejev alone has taught more than 5,000 students in 25 years.

Hull said when she has traveled to Russia, she has been met with some opposition to the notion of teaching non-Orthodox students about iconography.

“It tends to be people from outside of American culture who are more worried about it,” she said. “For the Orthodox, the icon is a really holy thing and if you’re not Orthodox how can you make an icon?”

“To me it’s a prayer,” said Lara Neri, an artist and Byzantine Catholic from Dallas. “It’s probably the most intense prayer that I do.”

But experts in the U.S. say the broad interest is often welcomed.

“There is nothing wrong with a non-Orthodox person wanting to learn iconography for their own spiritual discipline,” said the Rev. Aristidis Garinis, an iconographer and a priest serving at the Greek Orthodox Church of St. Nicholas in Flushing, N.Y.

Iconographers, on the other hand, should be Orthodox church members designated by the church, he said. 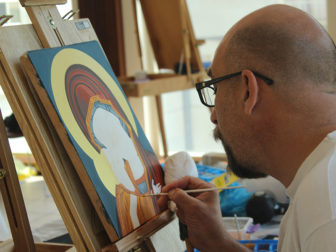 David Heatwole of Martinsburg, W.Va., works on an icon during a class at St. Sophia Greek Orthodox Cathedral in Washington, D.C., in June 2016. RNS photo by Adelle M. Banks

During the St. Sophia class, Papadopoulos guided his students in the basics of Byzantine icons, contrasting them with other forms of art. There is only height and width and no depth. Images of Jesus are larger than other figures because he is the most holy, he explained.

Gradually over the week, his charges added the blue background and the bright gold paint of the haloes surrounding the heads of Mary and baby Jesus, using egg tempera paints Papadopoulos mixed at the front of the room with eggs he deftly separated.

Some of the students came with artistic experience, hungry to learn more.

Emmanuel “Chito” Santos traveled all the way from Guam, after seeing a notice about the class online. He teaches geography and art at a Catholic boys prep school but also has filled its chapel’s walls with art of apostles and saints. 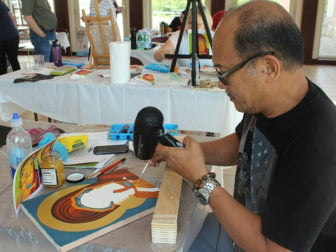 “I have to learn and I have to unlearn a few things that I assumed was the right way to do it,” he said of his new work with an expert.

But unlike some students, Santos was already familiar with the icon that Papadopoulos chose for the class: Our Lady of Vladimir. The instructor from Guam says it offers a gentle evangelistic direction.

“There’s a message through it, you see,” he said, pausing at his easel. “She looks at you so she’s talking to you but then she’s holding on to her baby so then the message is ‘Follow my baby.’ And then the baby is looking at her face and so the message of the baby is ‘Follow my mom. My mom is the best example of how to follow me.’”