(RNS) Fidel Castro, the Marxist revolutionary who ruled the Western Hemisphere’s only Communist state, acknowledged later in life that he was deeply influenced by Catholic teaching and welcomed a succession of popes to Cuba.

Despite carrying out repressive measures against the church in the wake of the 1959 Cuban Revolution, and then being excommunicated, Castro, who died Friday (Nov. 25), saw himself as leading a struggle with some of the same noble aims as those of Christianity — including humility and concern for the poor.

“I believe Karl Marx could have subscribed to the Sermon on the Mount,” he said in a long interview with a Brazilian priest published decades ago. But he added that the historic Catholic Church had been used “as a tool for domination, exploitation and oppression for centuries.”

The following is a timeline of key religious events in Castro’s life:

Aug. 13, 1926 – Fidel Castro is born into a moderately affluent family of sugar cane plantation owners and baptized as a Roman Catholic. His father, Angel Castro, was a self-made immigrant from Spain who had married his maid, Lina Ruz, with whom he had seven children. 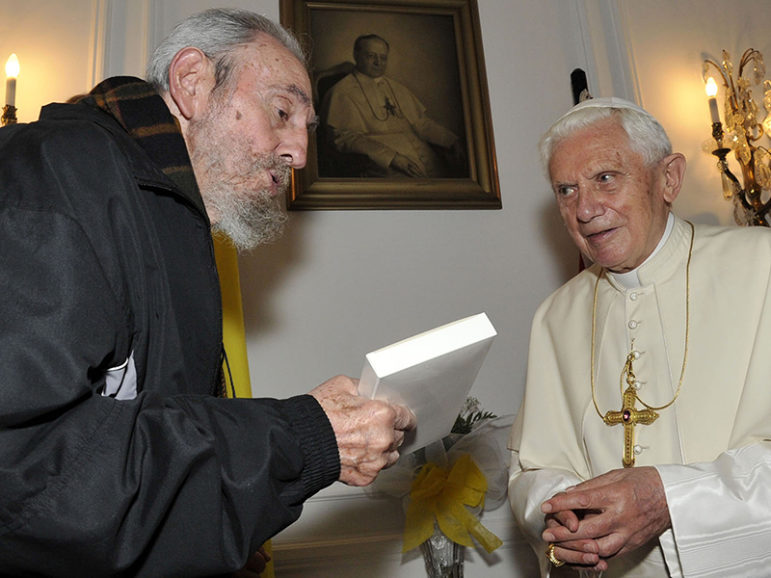 Castro would say later that the faith offered at Belen was “very dogmatic” and describe himself as having been a restless student. Nonetheless, he said Jesuits “influenced me with their strict organization, their discipline and their values. … They influenced my sense of justice.”

1962 – The Vatican, which had excommunicated all Catholics involved with communist groups in its 1949 Decree Against Communism, adds Fidel Castro to the list of those ejected from the church.

1976 – A decade and a half after the revolution, Cuba adopts a constitution which declares the country to be an atheist state.

1991 – Castro has the constitution amended to redefine Cuba as a secular state. The Communist Party allows religious believers to become members.

1985 – Castro meets a delegation of visiting U.S. bishops and praises Christian values such as sacrifice, austerity and humility.

“I told them that if they organized a state in accord with Christian precepts, they’d create one similar to ours,” he would later tell the Brazilian Dominican friar Frei Betto.

1996 – Fidel Castro visits the Vatican. During a 35-minute meeting, the Cuban leader tells St. John Paul II: ”Your Holiness, I expect to see you soon in Cuba.” 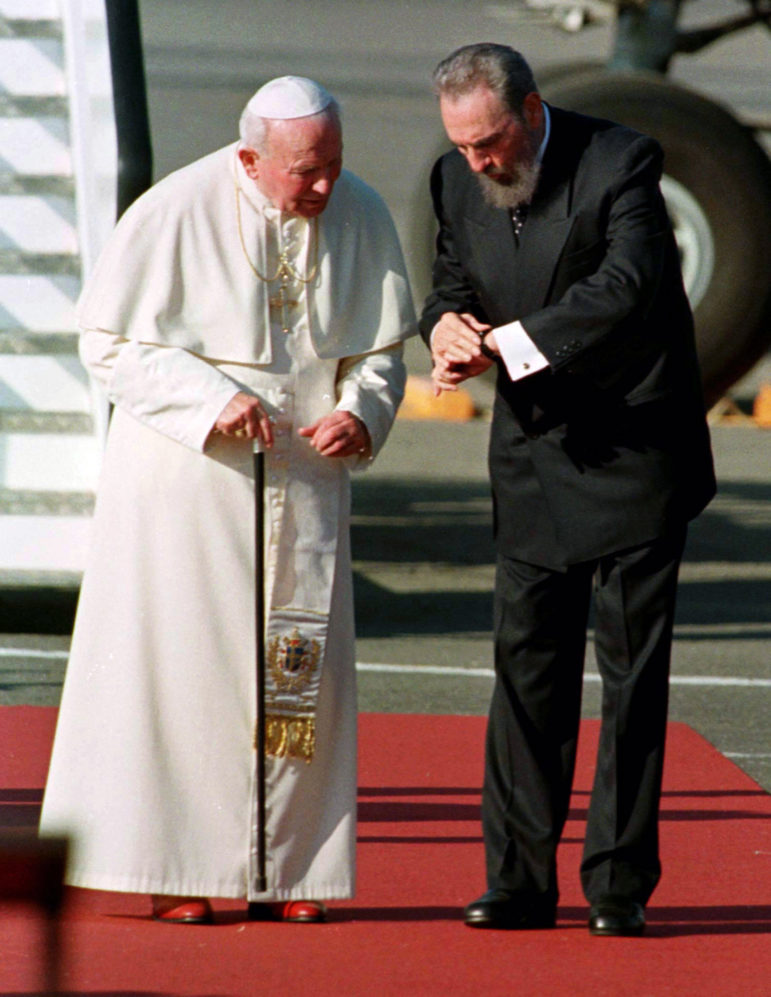 1998 – St. John Paul II visits Havana and meets Castro, who wore a dark suit instead of his standard military uniform. The pope talks about human rights and blasts the lack of basic freedoms in Cuba. Christmas is reinstated as a national holiday.

2012 – Pope Benedict XVI visits Havana and meets Fidel, who had relinquished power to his brother Raul, after celebrating Mass on Revolution Square. Benedict requests that Good Friday also be recognized as an official holiday.

2015 – Castro meets with Pope Francis, who is visiting Cuba on his way to the United States. The retired Cuban leader gives the pontiff a copy of “Fidel and Religion” — a 353-page book based on 23 hours of interviews between him and Betto.