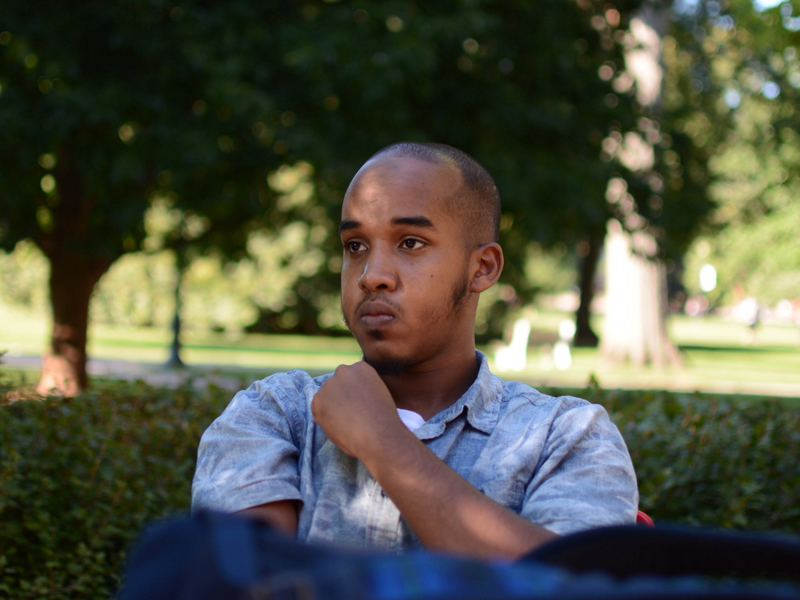 Abdul Razak Artan, a third-year student in logistics management, sits on the Oval in an August 2016 photo provided by The Lantern, student newspaper of Ohio State University in Columbus, Ohio, U.S. on Nov. 28, 2016. Courtesy of Kevin Stankiewicz for The Lantern/Handout via REUTERS
November 28, 2016
Yonat Shimron

(Reuters) A car and knife attack by an Ohio State University student that injured 11 people before the suspect was shot dead by a police officer is being investigated as a possible terror attack, a U.S. congressman and another government source said.

The suspect, Abdul Razak Ali Artan, was shot and killed by a police officer with less than two years on the force after driving into a group of people and then jumping out of the vehicle and stabbing people with a butcher knife at the school's Columbus campus, said Monica Moll, director of public safety for Ohio State University.

The assailant was an 18-year-old immigrant from Somalia and a lawful permanent resident of the United States, two U.S. government sources said. Ohio State University Police Chief Craig Stone told a news conference that Artan might have been as old as 20.

The officials said they could not speak on the record because of the ongoing investigation.

U.S. Representative Adam Schiff, the ranking Democrat on the House Permanent Select Committee on Intelligence, said intelligence agencies were assisting in the investigation.

"It bears all of the hallmarks of a terror attack carried out by someone who may have been self-radicalized," Schiff said in a statement.

A spokesman for Columbus' Somali community spoke out against the attack.

"I want everyone to know that we the Somali-American community stand shoulder-to-shoulder with our fellow Americans in condemning the sickening violence that took place in our city earlier today," Abdi Dini, a member of the Somali community, said at a news conference inOhio.

The campus newspaper, The Lantern, on Monday (Nov. 28) posted on its website an interview with Artan that it had published only in print in August as part of its Humans of Ohio State feature.

In the interview, Artan, a third-year logistics management student, said he had recently transferred to Ohio State from Columbus State University. Artan talked about being a Muslim and said that Columbus State had offered more accommodations for prayer.

"We had prayer rooms, like actual rooms where we could go pray because we Muslims have to pray five times a day," he was quoted as saying.

Artan said he was scared to pray openly on campus as a Muslim, saying that he feared that media portrayals of Muslims would give people the wrong idea about him.

"This place is huge, and I don't even know where to pray," he told the newspaper. "If people look at me, a Muslim praying, I don't know what they're going to think, what's going to happen. ... But I just did it. ... I went over to the corner and just prayed."

He previously had spent nearly month in Dallas with his mother and six siblings after arriving in the U.S. more than two years ago. There, the family had received aid and shelter from Catholic Charities, according to NBC 5 Dallas-Fort Worth.

Of the people injured in the attack on Monday, one was critically injured, Columbus fire officials said. Eleven people were treated at area hospitals, including 10 taken by ambulance.

"It frankly took a piece out of everybody here at our beautiful Ohio State University that this could have happened here," Ohio Governor John Kasich said at a news conference.

With nearly 60,000 students, the Columbus campus is the state's flagship public university.

Fire officials said the critically injured victim was taken to the university hospital. A spokeswoman said that by Monday evening, none of the patients there suffered from life-threatening conditions.

Two other hospitals received five patients, who suffered from lacerations and injuries caused by the vehicle, Thomas said.

The university initially reported the attack on Twitter, saying it involved an "active shooter."

Moll said that while in the vehicle, the suspect jumped the curb and used the vehicle to strike pedestrians in front of Watts Hall.

He then left the vehicle and stabbed several other people, Stone, the Ohio State police chief, said.

Less than 2 minutes elapsed between the first call for help at 9:52 a.m. and the shots fired by campus police officer Alan Horujko, 28, Moll said.

Monday's incident follows a stabbing attack in September at the Crossroads Mall in St. Cloud, Minnesota, where a man whose family came to the United States from Somalia wounded 10 people with a knife before he was shot to death by an off-duty police officer.

Authorities last month indicated the Minnesota attacker showed signs of radicalization, and a Federal Bureau of Investigation special agent said his actions appeared to be "consistent with the philosophies of violent radical Islamic groups."

CNN aired an image from a room at Ohio State where students had barricaded a door with stacked chairs.

Columbus and university police continued their investigation with assistance from the FBI.

A university warning on Twitter telling students to shelter in place was lifted shortly before noon.

The university campus remained open, although classes were canceled for the day.