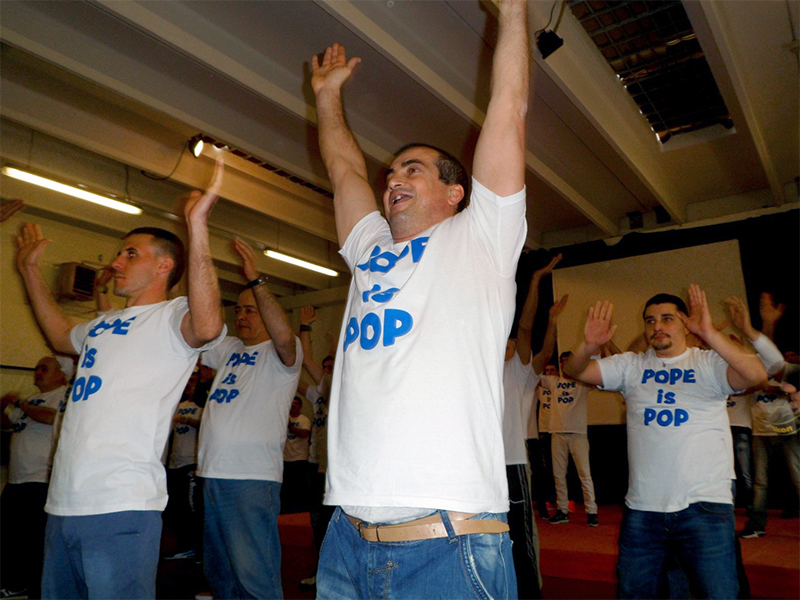 VATICAN CITY (RNS) Dozens of prisoners staged a "flash mob" inside an Italian men’s prison to celebrate Pope Francis’ calls for prison reform and greater tolerance and acceptance of the world’s migrants.

Around 70 inmates from diverse faiths and ethnic backgrounds danced a Zumba routine titled “Pope is Pop” on Thursday (Dec. 1) at the low-security district prison in the northern city of Ferrara.

They included Catholics, Muslims and Orthodox prisoners from Italy and other countries.

Among the lyrics the inmates sang while they danced were “Tonight you are not alone, Francis is there, everywhere. Hallelujah!” and “Pope is pop, our hope is pope.”

One inmate appears in the video saying: “This small world inside our prison, which also has many foreigners from various faiths, makes you realize that we are all equal.”

“The pope has opened the doors of the church, embracing the most diverse cultures, accepting and welcoming people from different religious faiths," a Muslim prisoner who remained anonymous said in a statement released by Igor Nogarotto, who organized the event. "He is showing us we can live in harmony under the same roof despite our diversity, really as we are living here today.”

Saying Francis was a "man of the people," Nogarotto said the initiative was a "multiethnic, secular prayer" to mark the end of the pope's Holy Year of Mercy.

It's not the first flash mob performed for Francis inside an Italian prison. Christian and Muslim women inmates at Rome’s high-security Rebibbia prison did a “Pope is Pop” flash mob dance in honor of the pontiff in October 2015.

Prison reform — including an end to the death penalty — and greater acceptance for the millions of refugees displaced around the world are among the top issues on Francis’ social agenda. Prisoners and organizers at the Ferrara District Prison pose for photos while preparing the "Pope is Pop" flash mob routine in Ferrara in northern Italy. Photo by Tommaso Trombetta

On several occasions the pope has called for Western countries and others to “tear down the walls” that prevent migrants from seeking asylum and to welcome those forced to leave their homes because of poverty and violent conflict.

During the U.S. presidential campaign he inflamed political debate when he suggested as he returned from a visit to Mexico that those who wanted to build walls were “not Christian." Republican candidate Donald Trump, who went on to win the election, responded angrily at the time.

Prison reform is a major issue for the pope. Only two weeks after he was elected in March 2013, Francis visited a youth detention facility in Rome to wash the feet of 12 inmates, including Muslims and women, for the traditional Holy Thursday ritual.

He has also scheduled visits inside prisons on several overseas trips.

On the final day of his U.S. visit in 2015, Francis made a stop at Philadelphia’s largest prison, telling inmates “that confinement is not the same thing as exclusion."

He has also appealed for clemency for death row inmates in America, including Kelly Gissendaner, who was executed in Georgia in 2015 after being convicted of orchestrating the murder of her husband.