“It was so powerful and so profound that it just took my breath away,” said Head, a a research subject in a new study of psychotherapy fueled by psilocybin, the active ingredient in the mind-altering drug known as magic mushrooms.

“Whatever it was, it was a power that is in the universe,” he added after the session at Johns Hopkins University School of Medicine in Baltimore. “I feel like it changed my life.”

Head, an actor who played Major Bobby Reed in the popular HBO series “The Wire,” was one of 80 cancer patients who volunteered to participate in two studies. The findings were published Thursday (Dec. 1) by researchers at Johns Hopkins and the New York University School of Medicine.

The separate but similar clinical trials were designed to see if a single dose of psilocybin could reduce psychological illness and existential distress among patients with a life-threatening diagnosis.

In a press release, Johns Hopkins University said the drug had been given “in tightly controlled conditions in the presence of two clinically trained monitors” and that use of the compound was not recommended “outside of such a research or patient care setting.”

Psilocybin is illegal in many countries. In the United States, it is classified along with heroin, marijuana and LSD as a Schedule I controlled substance, which means that, according to the federal government, it has “no currently accepted medical use in treatment.”

Still, the trials suggest that spiritual feelings triggered by the drug may play a role in alleviating depression and severe anxiety, especially when dealing with a life-threatening illness.

“Many of the patients,” NYU researcher Stephen Ross observed, “would say something like, ‘Now I’ve experienced the death of the body, so I’m not so afraid.’ They get through it. They come out the other side.”

The study of 51 depressed cancer patients at John Hopkins reported reduced depression in 92 percent of those who received a high dose of psychedelic psilocybin, compared with only 32 percent among those who got an extremely low dose that should not have had much of an effect. Tests to measure depression were done five weeks after the psilocybin session.

NYU researchers found that 83 percent of volunteers treated with psilocybin had a significant reduction in depression symptoms seven weeks after they received a single dose of the psychedelic compound. That compared with only 14 percent of a control group that got all the therapy — but with a placebo pill containing niacin. There were a total of 29 research subjects in that group.

Both research teams found that most of the improvement in mood remained six months after the psychedelic sessions. Those who randomly received the placebo pills in the double-blind trials were later able to undergo a high-dose psilocybin session, and they also showed significant long-term psychological gains.

Ross, director of addiction psychiatry at NYU Langone Medical Center, said half of the New York volunteers going into the study described themselves as agnostics or atheists, and half had some kind of religious affiliation. But roughly equal numbers in both groups had experiences that could be described as “mystical.”

“People describe being in touch with awe-inspiring elements, with something sacred. They describe a sense of infinite love, a sense of peace, humility, being transported back into their lives,” he said. “They described a sense of internal and external oneness.”

Other studies have found that between 30 percent and 40 of percent of cancer patients in hospital settings endure clinically significant levels of depression and severe anxiety.

Tony Head was diagnosed in 2011 with metastasized prostate cancer and told that he probably had less than five years to live — odds he has already beaten. He heard about the study from his oncologist but took a year to decide to volunteer and go through a rigorous screening process.

Head, 64, had tried mescaline once with a girlfriend back in college but said, “I didn’t really get any hallucinogenic effect.”

Volunteers in both clinical trials wore eyeshades and listened to evocative music through headphones while tripping on the synthesized magic mushroom medicine. The sessions, which can last from six to 10 hours, are conducted in spaces designed to look more like living rooms than research labs.

Head said he felt his body disappear, which initially scared him. He seemed to be floating in a dark, infinite space. “Then I saw this ball of colors,” he said. “It came toward me and I felt a little fearful, but then it washed over me. I had this wonderful feeling that I was safe and nothing was going to happen to me.”

“I’m not a religious person. I don’t go to church,” Head said in a telephone interview. “Somehow, psilocybin opens a trap door in your brain. It allows you to pass into a place that normally you don’t have access to. … It just helped me come to grips with knowing that when I do pass, it won’t be this scary, terrible thing that I might have thought it was. It’s like there is something for you on the other side, and it is good.”

Roland Griffiths, the lead researcher on the Johns Hopkins team, said perhaps the most extraordinary finding is that a single dose of a drug can have such long-term positive effects on the volunteers’ mood.

“It’s more proper to say that it’s the psilocybin-occasioned experience that gave them these enduring effects,” he said. “The drug effect itself is gone after one day.”

Griffiths, a professor in the department of psychiatry and neurosciences at Johns Hopkins, said he is aware that some people of faith might question whether a drug-induced mystical state is an “authentic religious experience.”

Together, the two clinical trials cost approximately $2 million. Both were funded by the Heffter Research Institute in Santa Fe, N.M., a private, nonprofit organization that has awarded $6.7 million since 1993 to support research into the beneficial uses of psychedelic drugs.

Advocates of psilocybin-assisted therapy hope that the U.S. Food and Drug Administration will now approve a final series of expanded research at sites around the nation, the last step in a decadeslong effort to persuade the government to reclassify the drug and allow its use by trained doctors and therapists.

Other research is ongoing using psilocybin and MDMA, also known as “Ecstasy,” as a therapeutic tool to treat post-traumatic stress disorder, alcoholism and drug addiction. Earlier this week, the FDA approved expanded clinical trials for MDMA-assisted therapy for PTSD. That research was funded by the Multidiscipinary Association for Psychedelic Studies, based in Santa Cruz, Calif.

Scholarly reactions to the new psilocybin findings sponsored by Heffter were included in the December 2016 edition of the Journal of Psychopharmacology, where the two studies were published.

Jeffrey Lieberman, a past president of the American Psychiatric Association, said this kind of psychedelic research should continue, citing “an ethical and public health imperative to use every avenue possible to pursue novel therapeutic agents.” Lieberman, the chairman of psychiatry at the Columbia University College of Medicine, said the NYU and Johns Hopkins studies “serve as a model for revisiting criminalized compounds of interest in a safe, ethical way.”

Paul Summergrad, chairman of the Tufts University School of Medicine, noted that psychedelic experiences and mental illness are both “highly complex neurological conditions … touching as they do on our deeply held sense of self and human agency.”

“Understanding where these experiences fit in healing, well-being and our understanding of consciousness may challenge many aspects of how we think about mental health,” he said, “but these well-designed studies build upon a recent body of work which confront us squarely with that task.”

(Don Lattin is a journalist and the author of five books, along with the forthcoming “Changing Our Minds: Psychedelic Sacraments and the New Psychotherapy,” to be published in the spring) 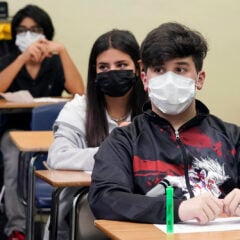 Opinion
As kids return to school, we must protect their right to rest. Sabbath practices can help.