VATICAN CITY (RNS) An American missionary priest killed in Guatemala in 1981 has moved a step closer to being named a Catholic saint after Pope Francis declared him the first-ever American martyr.

The Rev. Stanley Rother, a priest from the Archdiocese of Oklahoma City, served for nearly 15 years in Guatemala before being shot dead during the country’s bloody civil war that divided the country from 1960 to 1996.

Rother was 46 when he was gunned down in the rectory of his church in Santiago Atitlan, a village 50 miles west of Guatemala City, on the same day government troops killed 13 townspeople and wounded 24 others there, according to Catholic News Service. 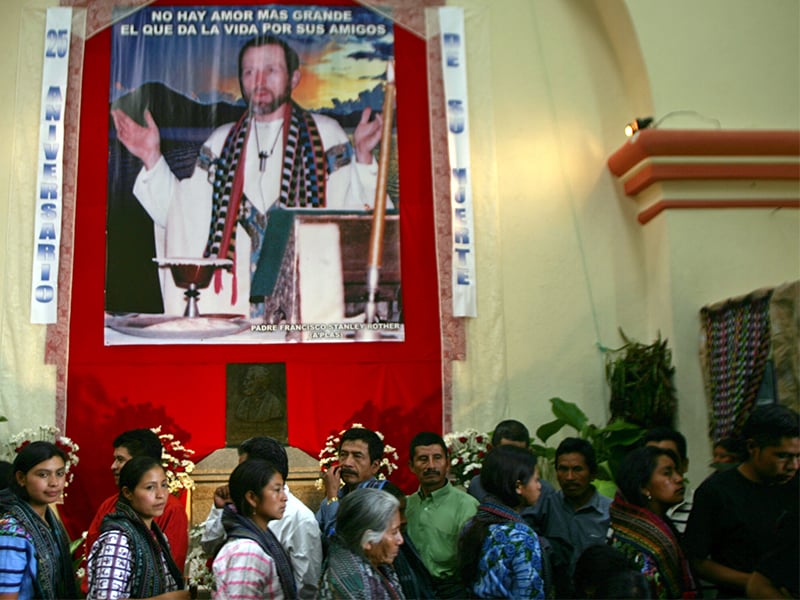 Catholics walk past a picture of the Rev. Stanley Rother during a memorial Mass in the small town of Santiago Atitlan, Guatemala, on July 28, 2006. Rother was an Oklahoman priest killed on July 28, 1981 for his work with indigenous poor during Guatemala’s brutal civil war. Photo courtesy of Reuters/Daniel LeClair

Rother, one of many priests killed during the Guatemalan civil war, is the first American to be recognized by the Vatican as a martyr. The Congregation for the Causes of the Saints declared that he had fulfilled the requirement of having “died in hatred of the faith.”

The pope signed the declaration on Thursday (Dec. 1), and it was announced by the Vatican on Friday.

“Stanley Rother has been approved for beatification,” said Archbishop Paul S. Coakley, head of Oklahoma City’s archdiocese, in a reaction he shared on Facebook and Instagram.

From Archbishop Coakley – Just announced this morning in Rome, Servant of God Fr. Stanley Rother has been approved for beatification! He is the first US born martyr and priest to receive this official recognition from the Vatican! And of course the first from Oklahoma! More later…

“He is the first US born martyr and priest to receive this official recognition from the Vatican! And of course the first from Oklahoma!”

Unlike other candidates for sainthood, martyrs do not need to have performed a Vatican-approved miracle to be beatified on the path to sainthood. Rother’s beatification is expected in the coming weeks.

Francis, the first pope from Latin America, has previously indicated that priests killed during Latin America’s right-wing dictatorships died for their faith.

Last year, the pope formally declared Salvadoran Archbishop Oscar Romero a martyr and beatified him. Romero, a prominent human rights activist, was assassinated while celebrating Mass in 1980, allegedly by a right-wing death squad. But his martyrdom was delayed for decades by conservative prelates who feared it would be interpreted as an endorsement of left-wing politics.