(RNS) Students in my college classes start out thinking religious identity and behavior are primarily about ideas. When I ask them about differences between Catholics and Methodists, they respond with differences in beliefs: the pope, contraception and transubstantiation.

These theological differences are real, of course, but I learned long ago that ideas do not create religious identity: They follow from it. My students imagine we pick from a large menu of ideological options and then make decisions about which membership best fits our own ideas.

It does not take long to convince them this “decision” model is badly incomplete. We never start from a neutral position. Our thinking is shaped by where we are born, who raised us and the tribes we call our own.

My students know, for instance, that people of Irish, Italian or Mexican descent are much more likely to be Catholic. Their Catholic identity and the intuitions that flow from it are shaped by their tribal membership long before they know a menu of ideas even exists. By the time they think about the ideas, their interpretation, acceptance or rejection is already deeply conditioned.

Ideas still matter but these ideas matter mostly to those who share a group’s identity. Catholics do not become Catholics, nor do Muslims or Jews become Muslims or Jews, because of reasoned argument: Who we are comes first.

It’s time to acknowledge that political identity and behavior operate more like religion than many of us care to admit.

This may sound obvious to some, but I learned it the hard way. I have spent too much of my adult life pretending the opposite, that politics is about ideas and we develop our positions through reason, logic and formal argumentation. It’s time I accept the truth: Who we are comes first in politics too.

It’s time to stop saying “People don’t vote their interests.” This usually means working white people would be better off voting for a government that promises to protect people like them. But that’s not how they experience their interests. They want a world where people like them have meaningful jobs and high status. In that world, those who need state protection have low status. Why should they trust the government as the solution when they see government as the cause of their lower status?

We must stop assuming people’s interests are based on the amount of money they earn rather than who they are.

It’s time to stop saying “Candidates should focus on the issues and stop running negative ads.” In what world is this a more effective strategy? It may appear effective in an academic world where people like me incorrectly assume elections are about ideas, reason and argumentation. But the political operatives of both parties have known for decades that voting behavior is about emotion, intuition and tribal affiliation. It’s about whose status goes up or down. The operatives know who we are. 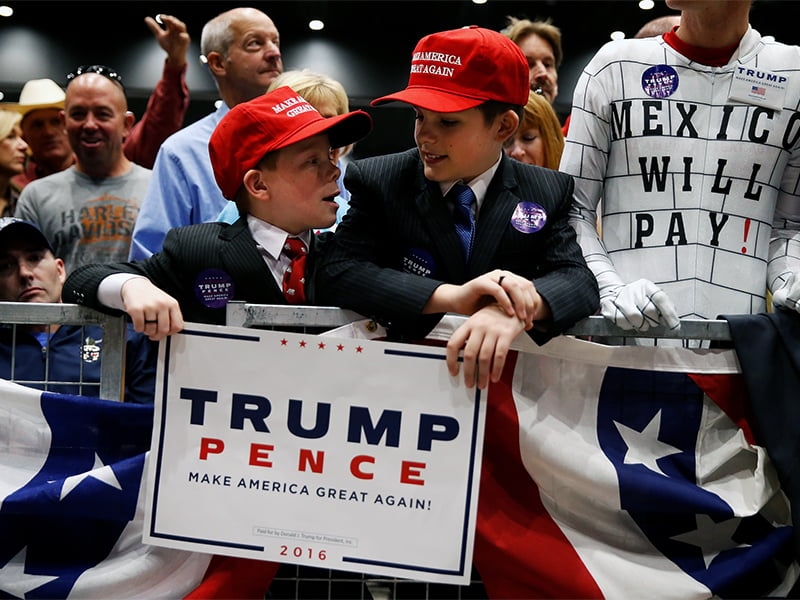 Young supporters of Republican presidential nominee Donald Trump wait for him to appear at a campaign rally in Sioux City, Iowa, on Nov. 6, 2016. Photo courtesy of Reuters/Carlo Allegri *Editors: This photo may only be republished with RNS-FARNSLEY-OPED, originally transmitted on Dec. 7, 2016.

It’s time to stop saying “Better civic education will fix the problem.” I am the director of the Indiana University Center for Civic Literacy, so I believe civic education matters. But we need to be realistic about how it matters. The Constitution applies to all of us; we all live in a complex, bureaucratic world. There is a difference between fact and opinion. Better education in these areas can support evidence-based debates, but the way we interpret evidence is shaped first and foremost by who we are.

Smart people have been telling us this for a while. Read Daniel Kahneman’s “Thinking, Fast and Slow,” Jonathan Haidt’s “The Righteous Mind” and John Hibbing et al.’s “Predisposed.” Each debunks the notion that our reason operates free from, much less above, our pre-existing intuitions.

Most people seem to understand this about religion but have failed to realize it about politics.

This is understandable; there are good reasons to resist this view of political behavior. We do not like to think of public deliberation as quite so susceptible to the wiles of cynicism and manipulation. We imagine our own intuitions and affiliations stem from clear thinking while our adversaries are peddling mere identity politics.  We want politics, even elections, to be evidence-based. We don’t want to live in a “post-truth” world.

But this is not about giving up on facts, truth or logic. When people lie outright, or are simply wrong on matters of fact, we must say so. But facts are understood in a context shaped by everyone’s fundamental sense of who they are and which side they are on.

There are limits to the religion and politics comparison. Religious organizations adapt more slowly to change than political parties do. There are relatively few barriers to broad religious pluralism in America, but our vast diversity of political views must be squeezed, more or less, into two parties.

Despite such limits, any hope of bridging serious social differences between rural and urban, rich and poor, young and old, or among racial and ethnic groups, starts with learning about people’s identities. We have to find places where our intuitions overlap. We have to search for places where our many tribal affiliations coincide even as we disagree about other issues.

As with religion, the choice between “facts” and “identity” in politics is a false one. We can argue about policies using evidence, just as religionists argue internally about theology and ethics. But we should also remember that political behavior, like religious behavior, begins with the way we understand our place in the universe.