VATICAN CITY (RNS) As mourners gathered in Cairo for a funeral service for the 24 people — mostly women and children — killed in a bombing at St. Mark’s Cathedral, Pope Francis joined world leaders in condemning one of the deadliest attacks on Egypt’s Coptic Christian minority in modern times.

“We are united in the blood of our martyrs,” Francis told Tawadros during his call before issuing an appeal ahead of the church’s World Day of Peace on Jan. 1 in which he lamented the suffering caused by what he termed “a horrifying world war fought piecemeal.”

In Cairo, Tawadros prayed over the wooden coffins of the victims during the service, at the Virgin Mary and St. Athanasius Church.

In his message, Francis expressed his sympathy particularly for the women and children who were among the victims in Sunday’s attack, the Vatican said in a statement. 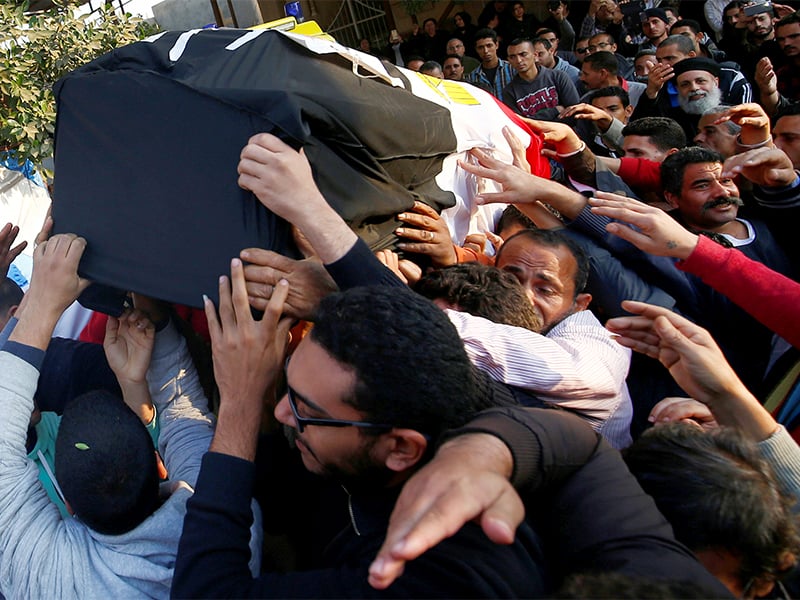 Relatives of a Christian woman who was killed in the bombing of Cairo’s main Coptic cathedral carry her body to the Mokattam Cemetery in Cairo on Dec. 12, 2016. Photo courtesy of Reuters/Amr Abdallah Dalsh

Security sources said at least six children were among the dead, with a bomb containing at least 12 kilograms (26 pounds) of TNT detonating on the side of the church used by women.

At a state funeral for the victims, Egyptian President Abdel-Fattah el-Sissi said a 22-year-old suicide bomber identified as Mahmoud Shafiq Mohammed Mustafa was responsible for the deadly attack that occurred in a chapel next to the cathedral during a Sunday service. Dozens were also injured in the violence, which coincided with a national holiday marking the birthday of the Prophet Muhammad.

El-Sissi declared three days of national mourning and urged Muslims and Christians to work together.

“Vicious terrorism is being waged against the country’s Copts and Muslims. Egypt will emerge stronger and more united from this situation,” he said Sunday.

He stressed that the government would be harsh in its response to the attack.

The president said three men and a woman had been arrested in connection with the attack.

In Britain, Bishop Angaelos, the head of the Coptic Church in the United Kingdom, called the attack “a horrific, ruthless and barbaric plot against innocent women and children.”

He suggested Egyptian authorities’ lenience is fueling attacks against Copts.

“In recent decades, we have seen recurring acts of violence against Christians and Christian communities in Egypt,” Angaelos said in a statement. “Time and time again, very few, if any, perpetrators have been brought to justice, and we subsequently continue to witness an escalation of these attacks.”

Saudi Arabia’s King Salman, whose country has been at odds with Egypt over the war in Syria, sent condolences to el-Sissi, calling the attack a “cowardly assault” on Egypt’s security, according to Saudi press agency SPA.

“Israel shares in the grief of the families of the victims and of the Egyptian people,” Netanyahu’s office said in a statement. “We must unite forces and fight terrorism together.”

The bombing was the second violent attack in greater Cairo in the past few days, following a Friday attack claimed by little-known terrorist group Revolution Brigade, which killed six policemen near the Al Salam Mosque in Giza.

Egypt has seen a wave of attacks by militants since 2013 when the military overthrew President Mohammed Morsi, an elected leader who hailed from the Muslim Brotherhood, and launched a crackdown against Islamists. 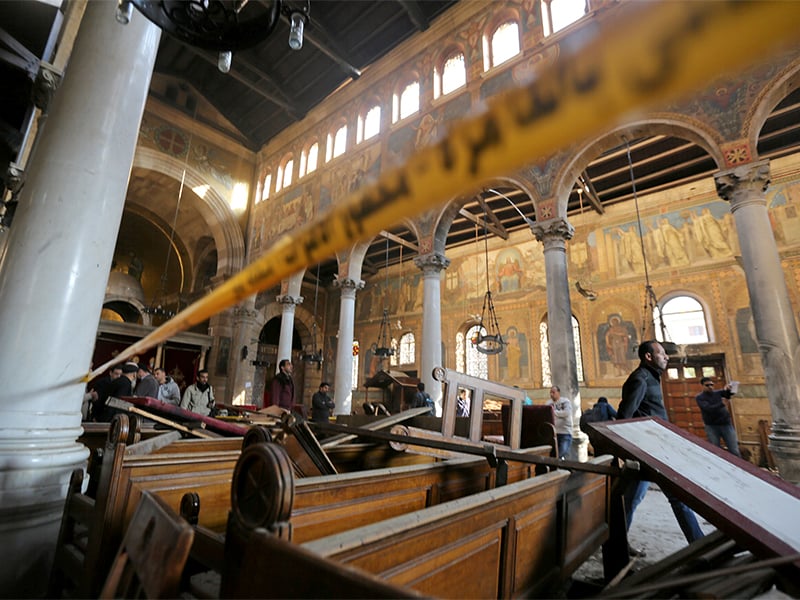 Damage from an explosion on Dec. 11, 2016 is seen inside Cairo’s Coptic Orthodox Cathedral. Photo courtesy of Reuters/Mohamed Abd El Ghany

Sunday’s explosion comes at a time of increased tension between Egypt’s Muslims and Coptic Christians, who account for about 10 percent of its 90 million inhabitants.

In 2013, two people died in clashes with local residents outside St. Mark’s Cathedral, considered to be the spiritual heart of the largest Christian minority in the Middle East.

In his World Day of Peace message released Monday, Pope Francis said “great suffering” was being caused by terrorism, organized crime and other acts of violence.

“While the last century knew the devastation of two World Wars, the threat of nuclear war and a great number of other conflicts, today, sadly we find ourselves engaged in a horrifying world war fought piecemeal,” Francis said.

(Material from Reuters was used in this report)