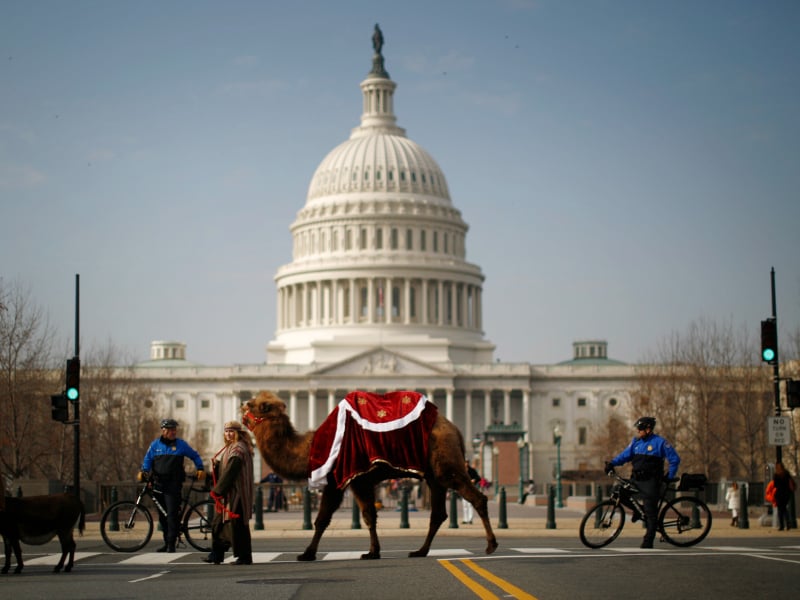 Bicycle police stop traffic to allow a camel, part of a nativity scene procession, to cross near the U.S. Capitol Building in Washington, D.C., on Dec. 3, 2013. The group "Faith and Action" held their annual "Live Nativity on Capitol Hill" to exercise their first amendment rights. Photo courtesy of Reuters/Jason Reed
December 18, 2016
David Gibson

(USA Today) At this time of year, we often see animals subjected to cruel holiday stunts or treated as living props in our confusing pageantry.

Domino's Japan recently announced it was canceling its ill-conceived plan to train reindeer to deliver pizza, following a PETA Asia campaign. And just this week, a man was charged with abusing a camel that was part of a hospital's live Nativity scene in Pikeville, Ky.

With online purchases at a record high, brick-and-mortar businesses are pulling out all the stops to draw customers. But while shoppers can choose whether to stand in long lines and battle the crowds, animals used in holiday promotions face a bleak Christmas season.

Santa belongs at the mall — but reindeer do not. They easily become stressed when hauled around and put on public display. They don't enjoy being petted, harnessed, or forced to "pull" sleighs.

These large, strong animals tend to be skittish and unpredictable, and research has shown that stress, exhaustion and poor nutrition can cause them to develop respiratory diseases, including pneumonia.

Packed parking lots are no place for horses, either, yet many malls offer horse-drawn carriage rides in a misguided effort to add an old-fashioned flavor to the season. Being caught up in the middle of busy holiday traffic and exposed to startling noises such as car horns and charity bell-ringing can make horses anxious and afraid.

But the season for operators to earn money is short, so their horses get few rest breaks. They can end up overworked, exhausted, hungry and thirsty. Many suffer from leg pain after pounding hard asphalt all day long or slogging through slush and ice.

Horses and humans alike have been seriously hurt — and even killed — when the horses have spooked and bolted, or when collisions between cars and carriages have occurred. Fourteen people on a holiday carriage ride in Virginia several years ago were hospitalized after a car slammed into them, ejecting the driver and causing the horses to run for 100 yards before finally hitting a pole.

And doesn't forcing animals to participate in Nativity scenes and festive shows contradict everything that the season represents?

Over the years, camels, sheep and donkeys used as props in holiday displays have been attacked by dogs or targeted by cruel people. A West Virginia man was arrested after he was caught having sex with a sheep who was being used in a crèche. Frightened and confused, animals have sometimes escaped, only to be hit and killed in traffic.

Officials in Charleston, S.C., decided to discontinue using them in the city's tree-lighting ceremony after a giraffe became upset by a confetti cannon and crowds taking flash pictures.

Live Nativity displays that use animals aren't even historically accurate. In Pope Emeritus Benedict XVI's biography of Jesus, he points out that contrary to popular belief, there were no oxen, camels, donkeys or other animals of any kind in the manger.

Children shouldn't be given the message that animals can be used as props, no matter how altruistic the intention. They can learn to appreciate other living beings by watching nature films, visiting reputable sanctuaries, and simply observing wildlife in parks, woods and lakes.

The magic of the holiday season will not be diminished for kids by ending the exploitation of animals, yet to the animals, it will make a world of difference.

At this time of year, goodwill takes center stage, and there are many ways to celebrate that don't compromise animals' well-being by forcing them to participate in confusing and stressful Christmas exhibits.

During this festive period, caring readers can extend the hand of compassion to all by refusing to patronize reindeer photo ops, carriage rides and "living" Nativity scenes.