(RNS) It’s list-making time, and here are my picks for the top stories in Jewish news for 2016:

Many American Jews perceived Donald Trump’s election as an ominous political validation for the increasing number of overt physical and verbal anti-Semitic attacks that have caused high anxiety and concern. Such public acts of religious bigotry and hatred, once thought to be unthinkable in the United States, were especially upsetting to younger Jews who falsely believed our nation was somehow immune to the pathology of anti-Semitism that is currently taking place in parts of Europe and the Middle East.

2. Schools taking a stand on Israel

A growing number of colleges and universities are becoming battlegrounds, pitting traditional support for Israel against individuals and groups demanding commercial boycotts, financial divestments and economic sanctions (BDS). Although BDS supporters claim their aim is to inflict economic pain on government and business concerns in the territories Israel captured in 1967, opponents perceive the campaign as an attack on the entire Jewish state. 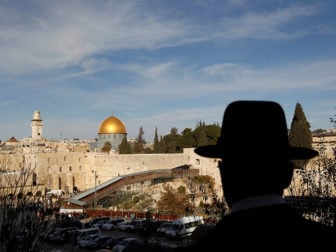 An ultra-Orthodox Jewish man stands at a point overlooking a wooden ramp leading up from Judaism’s Western Wall to the sacred compound known to Muslims as the Noble Sanctuary and to Jews as Temple Mount, where the Al-Aqsa mosque and the Dome of the Rock shrine stand, in Jerusalem’s Old City on Dec. 12, 2011. Photo courtesy of Reuters/Ronen Zvulun

The Jewish community warmly welcomed the creation of the United Nations in 1945, and in 1947 it collectively applauded when the U.N. General Assembly approved a resolution calling for a “two-state solution” — a Jewish and an Arab state in a partitioned Holy Land.

But by 2016, after decades of relentless one-sided anti-Israel resolutions, the U.N. had lost much of its Jewish support.

In an egregious action this year, the UNESCO World Heritage Committee adopted a resolution seeking to erase the age-old Jewish connection to the Old City of Jerusalem. The resolution followed an earlier UNESCO Executive Board resolution that completely omitted all Jewish links and references, including those from the Bible, from the holy sites in Jerusalem.

Besides being opposed to a two-state solution, David Friedman, the bankruptcy lawyer Trump is due to nominate as ambassador to Israel, has also called fellow Jews who differ with him on Israel policies “kapos.” It’s an especially odious term that stems from the Holocaust period, when it was used to describe Jews who collaborated with the Nazis. Friedman’s nomination has caused a deep division within the American  Jewish community and within Israel itself. 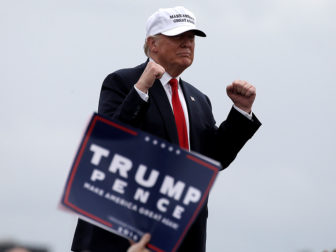 Republican presidential nominee Donald Trump reacts to cheers from supporters as he departs a campaign rally in Lakeland, Fla., on Oct. 12, 2016. Photo courtesy of Reuters/Mike Segar

Although the majority of Jews voted overwhelmingly for Hillary Clinton, nearly half of Orthodox Jews opted for Donald Trump.

Orthodox Jews make up about 10 percent of the estimated 5.3 million Jewish adults in the United States. But Orthodox Jews’ numbers are rising. They make up 27 percent of Jews under the age of 18 and 35 percent of all children under 5. They are the only Jewish group in the U.S. that maintains an above-replacement birthrate, averaging over four children per family.

Rabbi Lori Shapiro leads an “Open Temple” in trendy Venice, Calif. Her congregation provides “ … for people who may be in an interfaith marriage, for people … raised ethnically but not spiritually Jewish, for people who are exploring, people who are curious.” This outside-the-box approach to doing synagogue is growing in other places as younger Jews reject rigid, conventional ways of being Jewish.

7. Yeshiva University gets a new president 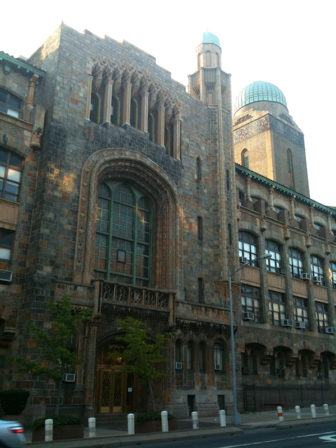 Financially troubled Yeshiva University in New York City, the intellectual and spiritual center of Orthodox Judaism, appointed Ari Berman as its next president. Berman, a graduate of YU’s rabbinical school, will be the school’s fifth president since its founding in 1915. YU lost $100 million in the Bernard Madoff scandal and has seen its student enrollment drop in recent years along with its capital endowment. The new leader of Yeshiva, which is famous for both its medical and law schools, must also contend with an intense internal debate about the school’s continuing encounter with the modern secular world while maintaining its prominent role as a center of traditional Judaism and Torah study.

8. The number of unaffiliated Jews grows

Confirming the cliché that “Jews are like everyone else, only more so,” the number of unaffiliated Jews who have opted out of “organized religion” continued to accelerate. Their behavior is similar to many of their Christian friends, classmates and neighbors who have “left the church.” Demographers and pollsters call such folks “nones.” The group now constitutes about 22 percent of America’s adult population and is growing.

For more than 50 years, “interreligious programs” in America usually meant the strengthening of relations between Jews and Christians. However, the past year has seen many more formal organizational Jewish contacts with Muslims, Hindus and other world religions, a trend likely to continue. 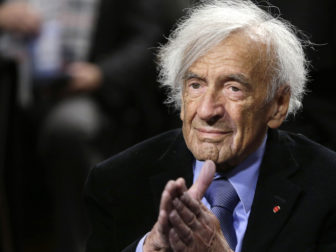 (Rabbi A. James Rudin is the American Jewish Committee’s senior interreligious adviser. His latest book is “Pillar of Fire: A Biography of Rabbi Stephen S. Wise,” published by Texas Tech University Press. He can be reached at jamesrudin.com)