It’s probably weird to say that one of your favorite books of the year is the memoir of a young guy battling cancer—what am I, some kind of sadist?—but it’s true. Podcaster Jason Micheli’s memoir Cancer Is Funny: Keeping Faith in Stage-Serious Chemo, which hit bookstores a few weeks ago, is on my top ten list for 2016.

It’s not only hilarious and poignant, nailing the old “I laughed, I cried, it became part of me” wish any reader has with a memoir, but it’s also deeply, surprisingly theological. You’ll find no clichés here.

The author is a pastor who was diagnosed with “stage-serious” cancer at age 37. I caught up with him by phone a couple of weeks ago. — JKR

RNS: First, tell me about the diagnosis and what happened to you.

Micheli: Almost two years ago this Advent, I finally went to a GI doctor after about six months of having uncomfortable abdominal pains that I chalked up to spicy food or other things. It would go away for a while and I’d forget about it. But two Advents ago it just got unbearable. The GI doc sent me for a CAT scan, and I was told I would get the results in about a week. But I got a call that same night, and the doctor asked me if I was sitting down.

That’s when I found out that my intestine was inverted and it was probably caused by a tumor. They rushed me to surgery. It turned out I had a 10” by 10” tumor and that it was caused by possibly one of five rare cancers. I had mantle cell lymphoma, which affects very few people, but typically they’re men in their 60s and 70s.

I began a year of intense chemo. And I finished that up about a year ago this past fall.

RNS: Were you journaling and writing this book while you were having treatment?

Micheli: Yeah, partly because of my role as a pastor. I was in church in the pulpit one Sunday, and then the next Sunday I was gone. I mean I just disappeared from the life of my church with no notice.

They all treated me as though I was already dead. And that had less to do with me, I realized, than it did with unresolved grief they had in their own lives over other people who had cancer. So many people had no idea how to process this emotionally or theologically.

Part of my vocation as a pastor is to live inside this fishbowl, and it didn’t make sense to hide this most significant thing away from them. So I decided to write about this for them as it was happening, and to do it in the way that they would themselves if they weren’t worried about what their pastor would say.

RNS: What do you mean, “worried about what their pastor would say”? What does that look like?

Micheli: I decided to narrate my experiences without stained-glass language. To not feel the need to protect God from my real feelings and questions. To try to take the language of the faith to see if it could lift the luggage.

I was inundated with people giving me books, some of which were “Christian” books filled with clichés and sentimentality. As a pastor I’m savvy enough to know that those books are crap, but someone else might actually be damaged by that demand for constant cheerfulness. I wanted to be as open and frank about I could in the moment, about the experiences of shame that your body can bring you, from impotence and everything that comes with chemotherapy.

But I also wanted to write with humor. Personally, that’s one of the frames of reference I have in my own life. I do theologically believe that if suffering brings you closer to God, then joy is a part of that. Joy and grief mingle together. That happens in the cancer ward too. 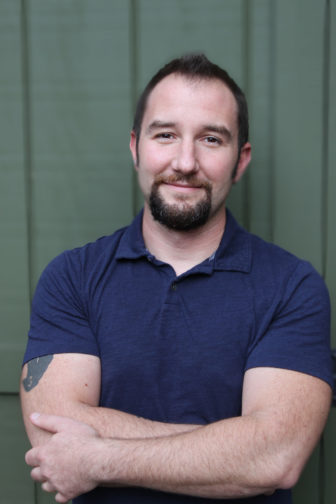 RNS: In the book you raise the classic questions about why people suffer, but you speak strongly against the “God gave me cancer so that . . . [insert your lesson here]” mindset. Even as you sympathize with that desire to understand why.

Micheli: God doesn’t do things like this to you to make you a better pastor, or a better person. I know that. But I still went through a period of “Why is God doing this to me?” even though I didn’t theologically believe that.

I think that the most Christian posture toward suffering is to rage against it, not to try to explain it. But I still went through that period where I wanted to know why God was doing this to me. One of the undertones that I wanted with the title is that suffering can sometimes make being a Christian seem foolish, so the joke’s on Christians for believing.

RNS: In the book you write beautifully about marriage, like that it was only after your diagnosis and not the dozens of weddings you performed that you ever noticed that the “in sickness and in health” vow always leads with the expectation of sickness.

Micheli: To be frank, it was probably the first time in our lives when shit got real. We have two kids, and they’re both adopted, and there have been some challenges. But this was the first time in our marriage that it became clear how grateful I was for this person I married, and that her character was not something I even needed to wonder about.

We’re so scared of death as a culture. But one of the things we’re choosing when we choose a spouse is someone who can help us die well. I certainly don’t want to do that anytime soon, but I know that I married someone I can count on to help me die well.

RNS: One of the things I loved most about the book is how your situation caused you to look at familiar Bible passages in fresh ways. For example, when Jesus is washing Peter’s feet, you notice that it’s not the act itself that freaks Peter out. He only objects to what Jesus says about how the footwashing shares in Jesus’ death. And Peter doesn’t want to die.

Micheli: All theology is contextual, right? All of a sudden, I was dying. Everything looked different from the perspective. It made me aware of how for many of the stories, particularly in the Gospels, we’ve accrued so many layers of interpretation, but there’s a first-order layer that’s human that we miss. With the footwashing story, we tie that into the Atonement, but on a more human level, it’s telling us that Peter doesn’t want to die. And in the Passion, Jesus makes sure his mother is taken care of when he dies. And Jesus makes sure he forgives the people he needs to forgive before he dies.

RNS: What are you hoping will happen with the book?

Micheli: I’m hoping that people in my situation, or people who care about someone in a situation like mine, will be helped by it. That’s the first demographic I have in mind. But just as important to me is that it is a book of theology. I want it to help people who either don’t know how that Christian language works or who have questions or doubts about how it works. I hope the book is able to help them see how someone can speak Christian in the midst of suffering.

Someone who blurbed the book said—and I think it’s correct—that if we’re not able to speak our faith in the midst of suffering, it’s basically useless. I wanted to give a shot of confidence or strength to people who are questioning whether we’re just kidding ourselves with this faith language.