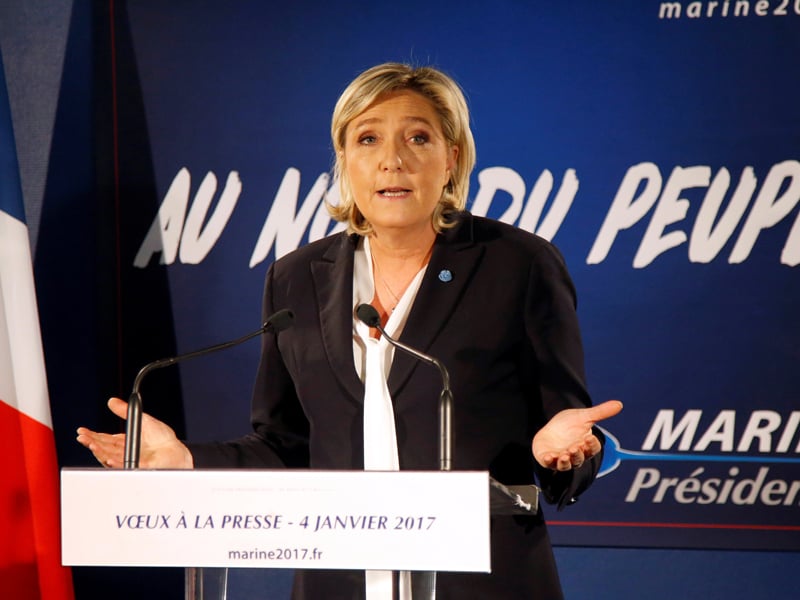 PARIS (Reuters) Far-right presidential hopeful Marine Le Pen attacked her main rival Francois Fillon over the link he has made between his political stance and his Christian beliefs, exposing a thorny issue facing their campaigns.

In an interview Tuesday (Jan. 10) with France 2 Television ahead of the presidential election in April, the National Front leader evoked the French principle of secularism in public life.

Known as 'laïcité', the principle aims to separate religion from state affairs and has spawned a culture where civil servants cannot wear headscarves at work and children at state schools do not learn about religion.

Modern references to it are made in the context of tensions with the country's Muslim community, but a mistrust of religion in government dates from the 18th century when revolutionaries identified Catholic Church leaders with the royalty they overthrew. A law that enshrines it goes back to 1905, long before large-scale immigration by people of other religions.

"The French are of course very attached to their religious beliefs ... but the opportunistic use of that faith, to defend a certain political line, I find is contrary to the principle of laïcité and contrary to our (French) values," Le Pen said.

"How can we fight against ghettoisation if we send that signal?," said Le Pen, whose anti-immigrant position has included criticising Muslims for praying in the street.

"How will we oblige those who want to pursue their politics in the name of some other religion, for example Islam?"

The principle of laicité has broad political support in France even though many French people are Catholics and many more say they embrace Christian values.

Many of Fillon's core supporters are committed Catholics.

He knows some of them are drawn to the anti-immigrant rhetoric of Le Pen, and his victory in the conservative primaries last month owed much to the backing of voters who, like him, have misgivings about gay marriage and state-funded abortion.

Last weekend, he declared: "I am a Gaullist, and what's more, I am a Christian," affirming his allegiance to his faith and to the legacy of the former President Charles de Gaulle.

Some of his supporters saw the statement as radical and it was condemned by rivals including Manuel Valls, a main contender for the Socialist presidential ticket.

Fillon's spokesman defended the statement. "It was intentional," he said, aimed at responding to attacks on his austere social policies, which opponents have called uncaring. "It's about solidarity and the defence of the poorest people. It's in his DNA."

By joining the attack on Fillon, Le Pen risks the wrath of some of her own supporters and further exposes a faultline within her own party.

Opinion polls have shown support for her dipping since Fillon won the conservative ticket in November - a development attributed by some to his appeal to the Catholic right.

Le Pen has sought to play down the FN's connection with such traditionalism in a bid to throw off a reputation for racism and bigotry - emphasising instead a pro-worker agenda.

But her need to go on the offensive against Fillon has re-opened Le Pen's feud with her niece, Marion Marechal-Le Pen, who represents that traditionalist FN group and evokes a Catholic heritage as the bedrock of her politics.

Marechal-Le Pen, 27, one of the FN's only two members of parliament, is closer in ideology to her grandfather and party founder Jean-Marie Le Pen than to her aunt.

Most opinion polls show Fillon and Le Pen meeting in a decisive second-round vote on May 7 after the April 23 first round.

Fillon is tipped to win by a comfortable margin, but the Socialists have yet to chose their candidate and third-placed independent centrist Emmanuel Macron has been climbing in opinion polls.