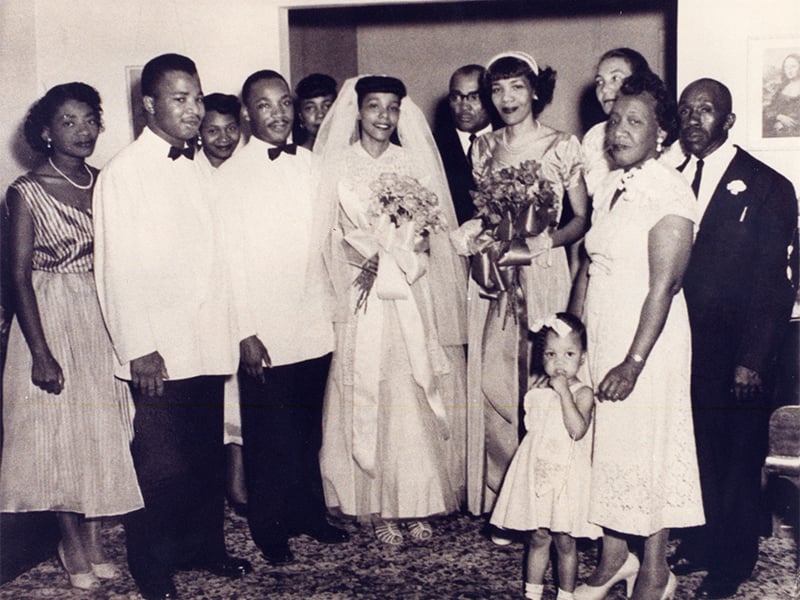 (RNS) Coretta Scott King is often remembered as the woman beside the Rev. Martin Luther King Jr., but in a new posthumous memoir, “My Life, My Love, My Legacy,” she steps out of his shadow and reveals a woman of faith and a civil rights activist in her own right.

Before her death at 78 in 2006, she founded the Martin Luther King Jr. Center for Nonviolent Social Change, lobbied Congress to name the Monday closest to his birthday a national holiday and served as a goodwill ambassador.

King dictated the memoir to the Rev. Barbara Reynolds, an author and journalist. Here are some excerpts from the book, which will be published on Tuesday (Jan. 17), the day after the holiday that honors her husband:

Despite my intentions to carve out a low-key role as a pastor’s wife, my role quickly evolved into more of a collaborative partnership with Martin. I began typing, listening, critiquing, and helping him prepare his sermons, something I continued to do throughout our married life. He would start his preparation around Monday. By Saturday, he would have the sermon written out word for word, and he would memorize it. He had a photographic memory, so he would go to the pulpit on Sunday and preach without notes. But in preparing the sermons, he would sometimes give me the subject matter and say, “Now what would you call my first point?” Of course I would think of something. Sometimes he would incorporate my suggestion into his sermon. Then he would rephrase it and go on to the next two points. Most of his sermons were three-point sermons. I felt very much involved in what he was doing.

After we returned home, I saw the effect of Martin’s identification with the asceticism practiced by Gandhi. Like Gandhi, my husband had struggled with the issue of materialism. In his writings, Gandhi challenged the cultural condition that deemed his wife and children possessions. He often questioned how even a cupboard full of books might be excessive, because his spirituality compelled him to give up all that he had.

For me, that brand of asceticism was more than I had expected in our marriage, and it was more than I could accept. If Martin had had his way, he would have taken an oath of poverty, refusing even the most basic necessities, such as a house. He felt that much of the corruption in society came from the desire to acquire material things such as houses, land, and cars. He wanted none of these, he said, telling me once, “You know a man who dedicates himself to a cause doesn’t need a family.” That statement did not hurt me because I knew he was searching for a balance between asceticism and materialism. But I insisted that our family have a house – nothing fancy, but at least the basics. It took almost thirteen years of marriage before he agreed to buy a house, and when he did, he said he didn’t need it; it was for me and the children. Finally, he decided that cars and a home were necessities, though he would strive to be more like Gandhi spiritually, adopting disciplines such as fasting in order to gain spiritual strength. Still, our house and car were in my name; he refused to own anything.

Outside of the home

Granted, Martin was always ambivalent about my role out front, which sent me traveling across the country instead of staying at home. I suppose I experienced the personal dilemma that baffles every working woman. What happens when you are expected to be Superwoman, to perform a dozen conflicting tasks at the same time? I was trying to balance my concert career with motherhood and my responsibilities as Martin’s wife and chief confidante. Most of the time, Martin was very supportive of my work. Once, however, I did have to set the record straight. During one exchange, he told me, “You see, I am called (by God), and you aren’t.” I responded, “I have always felt that I have a call on my life, too. I’ve been called by God, too, to do something. You may not understand it, but I have a sense of a calling, too.”

Still not convinced, Martin turned to me and said, “Well, somebody has to take care of the kids.”

Looking a bit crushed, he asked, “You aren’t totally happy being my wife and the mother of my children, are you?”

“I love being your wife and the mother of your children,” I said. “But if that’s all I am to do, I’ll go crazy.”

But I understand, the question everyone wants to know is this: Do I believe my husband was unfaithful? All I can speak for is what I know. I don’t have any evidence, and I never had a gut feeling that told me he had strayed. I never experienced any feelings of being rejected. I believe that women know if their husbands are unfaithful. They feel it. I understand that men can become very indifferent and cold, but I never sensed anything of that sort from Martin. I’m not saying that Martin was a saint. I never said he was perfect. Nobody is perfect. But as far as I am concerned, our marriage was a very good marriage, and it was like that all the way to the end.

We had talked about it, joked about it, prayed about it. He had prepared me, but when death actually arrived, the feeling of separation was overwhelming. Our bedroom was filled with emptiness. My nights were lonely. In church, the preachers often said that suffering would endure for a night, and joy would come in the morning. But, I assure you, morning does not return without a long passage through the lonely nights of heartache. Sometimes I felt that my joy would never return.

For months, I tried to console myself with the knowledge that Martin was in a better place and was happy. I knew I was crying for myself, feeling sorry for myself. Martin wouldn’t want me to weep over him.

I was no longer a wife, but I was still a parent — and a single parent at that. This was the motivating thought that kept me going. No matter what else I did, I had to be a mother first.

Marrying Martin and the movement perfected my journey of discovery, soothed my yearning to pour out the values and vision within my soul. The bombings, the murders, even the assassination of my husband only intensified my devotion and solidified my resolve that God had allowed me to be born at the right time in history, a time when the Spirit tracked down the willing, empowered the waiting, and magnified human outcomes far above what finite minds could conceive.

(Excerpted from "My Life, My Love, My Legacy," by Coretta Scott King, as told to the Rev. Dr. Barbara Reynolds, published by Henry Holt and Company. Copyright © 2017 by the Estate of Coretta Scott King. All rights reserved.)