That day, a courageous community activist, Rosa Parks, had been forced off a city bus and jailed.

That night, a hurt, angry crowd of people gathered at Holt Street to discuss the situation.

Speakers noted that what happened that day was simply the way things were done in Montgomery. Racial segregation and white supremacy controlled every aspect of Alabama life. What could anybody do with a man like Big Jim Folsom in charge of the state? Face facts, prominent clergy and laity said as they shook their heads, clenched their fists and lamented.

Then someone turned to the new young preacher in town, fresh from a great run at Morehouse and Boston University, and asked him to say a word. At first he spoke quietly, almost hesitatingly. Then his speech picked up volume:

People get tired, he told them, tired of being beaten down, scorned. There comes a time when tired people have had enough. They rise up; they act.

“We have no alternative but to protest,” King said in a speech the next night. “For many years we have shown an amazing patience. We have sometimes given our white brothers the feeling that we liked the way we were being treated. But we come here tonight to be saved from that patience that makes us patient with anything less than freedom and justice.”

As a participant at that night’s meeting said, “We came there to have a meeting and we left as a movement.”

Thus began the Montgomery bus boycott and the civil rights movement — begun because God instigated someone to lose patience, speak up, speak out and act. 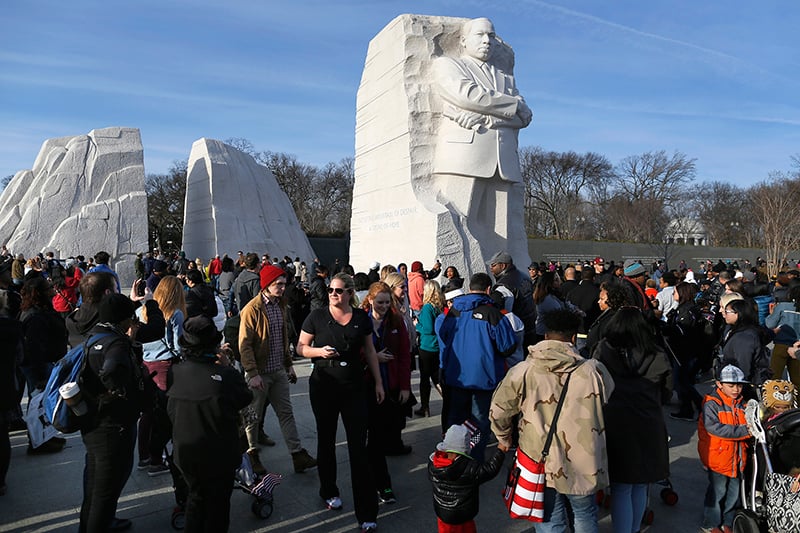 People visit the Martin Luther King Jr. Memorial on the U.S. national holiday in his honor, in Washington, on Jan. 20, 2014.  Photo courtesy of Reuters/Jonathan Ernst

Patience is a Christian virtue, to be sure. But in the present mean-spirited and divisive political climate, and given the coming disaster on Jan. 20 that we have brought on ourselves, I want to say a good word for impatience.

To my own meager efforts to speak up and speak out, many have responded, “You are not even giving our new president a chance,” or “The time for carping, left-wing criticism is over. You need to back the winner.”

There’s a time for reconciliation, for prayers for unity and healing. This is not such an hour.

It is not for me to ask that women be reconciled to a man who has publicly, repeatedly wronged them in misogynistic word and deed, a man who boasts of his inability to admit wrong. I’m not the one to tell Hispanic Americans to support a person who built a political powerhouse by lying about them.

We must not allow our silence or passive acquiescence to suggest “we like the way we are being treated.”

Let us remember, as we recall the witness of King, that one of the gifts he gave oppressed people was a sense of agency.

His powerful words moved a nation from patience, acceptance and facile calls for unity to righteous action.

I was there, so I can tell you: White supremacy in the pre-1960s South was pervasive and complete. Segregation now and forever. Amen.

King, Malcolm X, Parks and even dear old impatient Lyndon Johnson appealed not only to our “better angels” but also to our buried national restlessness, and a whole nation began to move forward.

Many urged calm, patience and respectful waiting. I was there so I can tell you. In fact, King’s “Letter from Birmingham Jail” was written to a predecessor of mine as bishop in Birmingham.

In that letter, King eloquently explained why waiting wasn’t the answer and pointedly chided good white liberals for their patient caution and bland moderation.

There is little that I or my family will suffer from rule by the Trump administration. We have health insurance. My pension went up impressively after the election. Jefferson Beauregard “Jeff” Sessions can do little to threaten my family.

But as a Christian, that’s not good enough.

By divine assignment, I’m my brother’s keeper. Vulnerable people who are not in my family are my neighbors, and the gifts I’ve received from God are to be expended in behalf of those in need. Jesus’ command to love one another is not a suggestion.

Acquiesce in the face of injustice is not an option that Jesus permits for those who call him Lord.

From earliest days, Christians suffered political persecution. In many places in Paul’s letters, Paul urges patience: Go ahead and obey the governing authorities; their power is only provisional. God will get them in the end.

However, in the Gospel of Luke, when Jesus puts his people on notice that they will be dragged into court, threatened by kings and incarcerated, he does not urge patience. Jesus dares to give his persecuted, maligned followers a job: “This will be a time for you to witness.”

Don’t you find that amazing? No sympathy from Jesus for jailing and persecution by the criminal justice system. No exhortation to keep their heads down, their speech civil and deferential. Jesus says that such times can be a God-given opportunity for faithful people to stand up, speak up and speak out. Jesus dares to call ordinary, vulnerable people to act up in his name. He gives people like us agency.

Is our time such a time? King, like Jesus, has been sanitized and cleaned up in order to be a national hero. But let’s not forget that before he became a respectable American icon, he was a Baptist preacher whom God called to speak up for justice. King risked obedience to God rather than governing authorities and encouraged others to do the same.

Down through history, God’s people have had an uncanny sense that times of crisis and disaster are times of vocation in which God gives agency to ordinary people to work for the continuing salvation of the world.

Therefore, this is my prayer:

“Lord, forgive the sin of our patience. Anoint us with a fresh spirit of impatience, that we might be half as angry over political injustice and human meanness as you are, and that, in our impatience, we might be given the guts to do something about it.” Amen.

(Will Willimon is professor of the practice of Christian ministry at Duke Divinity School and a retired United Methodist bishop. His forthcoming book is titled “Who Lynched Willie Earle?: Preaching to Confront Racism”)