(RNS) Republican South Carolina Gov. Nikki Haley will be a rare woman on Donald Trump's Cabinet-level team, and one of the few persons of color.

Knowing little about her foreign policy positions, given that she has little to no international experience, what should we expect from Haley once she is confirmed to be ambassador to the United Nations?

Although Haley gave up her traditional birth name (Nimrata Randhawa) and is a practicing Christian, she brings a unique background to the U.N. ambassadorship because of her Sikh heritage.

Like her, I have parents who speak the Punjabi language, profess the Sikh religion and come from rough and tumble rural stock. I believe her heritage gives her fuel to resist Trump’s anti-diplomatic marching orders, and, as a moderate, she can withstand the extremist inclinations of the incoming Cabinet.

The Sikh faith is a 500-year-old monotheistic religion that originated in Punjab and whose founding figures illustrated examples of servant leadership. They taught that all women and men are equal before God (whom Sikhs call “Vahiguru”), and they went as far as the gallows to defend the rights of others.

Today, about 25 million people around the world — including between 250,000 and 500,000 in the U.S. — practice the Sikh religion, which places a high value on benevolent political engagement.

Haley still occasionally attends services at her parents’ South Carolina gurdwara (Sikh place of worship). She has openly talked about being raised in an immigrant, Sikh family. On a 2014 visit to India to promote her state’s economy, a visibly emotional Haley paid her respects at the most important gurdwara (the Darbar Sahib, or “esteemed court”) in Amritsar, Punjab.

Unselfish defense of minority rights and fierce resistance to abuses of authority are parts of her Sikh and Punjabi heritage, and we must hope they will animate Haley's tenure as a Trump Cabinet-level appointee.

This Southern governor has had to defy her party’s extremists before. 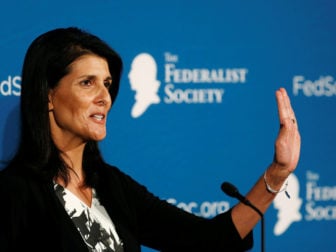 Haley has herself been the victim of bigoted attacks against her ethnicity and her parents’ Sikh religiosity. As she ran for governor in 2010, Republican state Sen. Jake Knotts called her and President Obama “ragheads,” a term used since the early 1900s in America to disparage turbaned Sikhs such as Haley’s father.

Even more recently, Trump surrogate and noted bigot Ann Coulter tweeted on Nov. 17, “If Trump wants an Indian Sec of State, how about Tonto?”

Coulter has also wrongly called Haley an immigrant and said that Haley therefore “does not understand America's history.”

During those days, concern for her own observant Sikh parents couldn’t have been far from her mind. Less than three years before, another white supremacist brutally murdered six worshippers at a gurdwara outside of Milwaukee.

These experiences show that Haley knows how to take tough stances during difficult times. Humanitarians around the world will be counting on her, in the role of U.N. ambassador, to champion voices of the unheard. The next humanitarian crisis will test the will of the world’s powerful countries, even as existing crises rage on.

It turns out Haley is not the first American of this background to represent the United States at the highest level of international affairs.

The first Asian congressman in America was Indian-American Dalip Singh Saund, a Sikh who provided a diplomatic face to several Asian countries during a vital time early in the Cold War. Having earned a doctorate from Berkeley in 1929, Saund ran for a local judicial position almost as soon as his new country changed its racist laws and allowed him citizenship. He won a seat in Congress in 1956. Many of us, including Haley, stand on his shoulders.

It must take immense strength and resolve to be a minority, woman leader in the American South from a religious family that practices an unfamiliar faith. Haley has performed admirably under such pressure. We should hold her to a high standard and call for her to be an exceptional U.N. envoy who represents an exceptional country on the world stage; a country where religious minorities are protected, not persecuted; where immigrants are valued, not vilified.

Trump has picked a climate-change denier to run the Environmental Protection Agency, an opponent of higher minimum wage to run the Labor Department, a voting rights opponent to run the Department of Justice and an oil executive with deep ties to Russian President Vladimir Putin to be secretary of state.

Is there any hope for balanced American diplomacy? A lot of people, maybe 7 billion, rely on Haley and other reasonable voices in the upcoming regime to uphold the core values of this republic, even when it makes them unpopular in the administration. Haley has a religious heritage and unique cultural perspective she can rely on to find her strength. May Vahiguru give her courage.

(Rahuldeep Singh Gill is an author and speaker on issues of faith and pluralism. His recent book about Sikh poetry is called “Drinking From Love's Cup.” Find him on Twitter @RahuldeepGill)