“Mr. President Donald Trump, Iraq is not a terrorist,” said Vian Dakhil as she received the Lantos Human Rights Prize at a Capitol Hill ceremony Wednesday (Feb. 8). “Iraqis are not terrorists. We are friends and allies. And we are looking forward to have exceptional relations with all people, especially with the United States of America.”

She drew a standing ovation from the crowd of more than 100 people, including politicians and diplomats, at the Rayburn House Office Building.

Dakhil’s presence at the ceremony had been in question due to Trump’s 90-day ban on travelers from Iraq and six other majority-Muslim nations. But she was able to fly out of Iraq on Saturday after she gained permission from the State Department.

The ban has been suspended by a U.S. District Court judge, whose decision is being weighed by an appellate court.

Dakhil, who stood by an English translator as she spoke in Arabic, told of the atrocities inflicted by the Islamic State group, including gang rapes of little girls. And she said the plight of her people continues, with thousands of women and girls in captivity and hundreds of thousands living in refugee camps in Kurdistan, a northern region of Iraq.

“Eighty percent of our villages and cities are completely destroyed,” she said. “We need a stand from the international community to get over this ordeal.”

In her earlier plea before her Parliament in 2014, Dakhil’s recounting of killings, rapes and other attacks by ISIS prompted former President Obama to authorize airstrikes and humanitarian aid to rescue thousands of trapped members of the religious minority.

“I speak here in the name of humanity,” she said at that time. “Save us! Save us!”

David Saperstein, former ambassador-at-large for international religious freedom, compared Dakhil to the heroine Queen Esther whose courage was depicted in the Hebrew Bible.

“She was perhaps the first woman lobbyist in the history of the world and she used her access to power in ancient Persia to literally save her people from genocide,” he said. “Vian Dakhil, when you stood up that day to defend the Yazidis of Iraq, a proud, ancient religious community, you stood as a modern Queen Esther.”

“Your voice, so strong in the Parliament, was a voice heard ’round the world and taught people about your people, your faith and your plight,” she told the award recipient.

Yazidis are a Kurdish-speaking people whose ancient religion blends elements of Zoroastrianism, Islam, Christianity and local folk beliefs. They meet in conical temples, where they worship a peacock deity called Melek Taus and hold elaborate ceremonies involving water and fire.

The prize Dakhil received is named for the late Rep. Tom Lantos, co-founder of the Congressional Human Rights Caucus, and is presented by the Lantos Foundation for Human Rights and Justice. Previous winners include former Secretary of State Hillary Clinton, the Dalai Lama and the late Elie Wiesel. 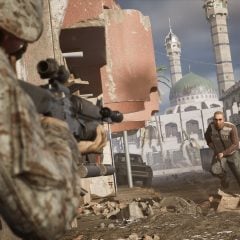