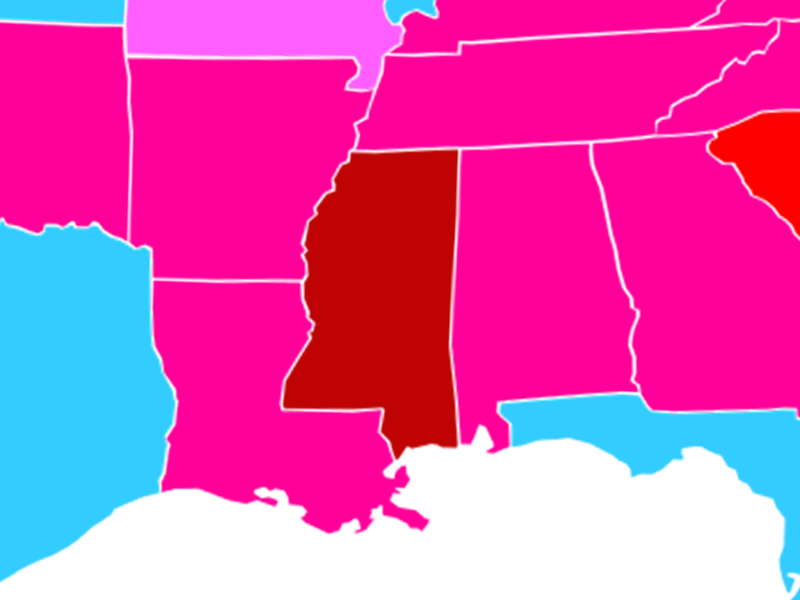 (RNS) A new Gallup survey shows that a greater proportion of Mississippians counts themselves as "very religious" than people from any other state: 59 percent.

The Magnolia State has owned the top spot in the religiosity survey for the past nine years.

Following close behind in the 2016 poll: Alabama, with 56 percent, and heavily Mormon Utah, with 54 percent calling themselves very religious.

Vermont, with 21 percent placing themselves in the very religious category, came in last — a ranking it has maintained for nine of the past 10 years. Just in front of Vermont: Maine (23 percent) and Massachusetts (25 percent).

Since 2008, when Gallup started tracking religiosity state by state, the rankings have changed little, with Southern states and Utah dominating the top 10, and New England, Northwest and Mid-Atlantic states dominating the bottom.

Also since 2008, the percentage of Americans as a whole who consider themselves "very religious" — the most devout label respondents can assign themselves in the poll — has dipped to 38 percent, down from 41 percent.

At the same time, the proportion of Americans who describe themselves as nonreligious edged up, from 30 percent to 32 percent, according to Gallup.

Gallup Editor-in-Chief Frank Newport, summarizing the poll, writes that a state's religiosity is a product of its history and religious culture.

"These cultures can be self-sustaining and extend beyond the life of any one resident," he writes. "Persons moving to Mississippi may find themselves more likely to attend religious services because so many others are doing so, while persons moving to Vermont may be less inclined to attend because so few of their neighbors do."