CHESTNUT HILL, Mass. (RNS) For Catholics, the key to working collaboratively with Pope Francis on issues from mass migration to climate change to Hispanic evangelization may be found in a controversial movement that many left for dead long ago: liberation theology.

That message reverberated this week through the halls of Boston College and a nearby retreat center as nearly 40 theologians gathered from across the Spanish-speaking world to discuss the movement’s future with its founding figures.

By championing God’s “preferential option for the poor,” liberation theology, which emerged as a force in the 1960s and 1970s, has deeply shaped the pontiff’s worldview, participants said. Now it can help the church see the poor as Francis sees them: as revealers of Jesus.

“This theology of liberation … the church was threatened by it in many ways, and for quite some time it was under suspicion,” said Thomas Groome, director of The Church in the 21st Century Center at Boston College. “But now it has come to center stage. It’s almost like the stone which the builders had first rejected has now become the cornerstone, especially in Pope Francis.” 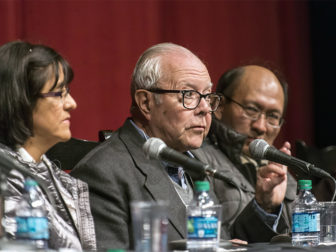 Theologians, from left, Olga Consuelo Velez of Colombia, Juan Carlos Scannone of Argentina, and Roberto Tomichá of Bolivia discuss the origins and current state of liberation theology at the Ibero-American Conference of Theology, which took place at Boston College’s School of Theology and Ministry, Feb. 6-10, 2017. Photo courtesy of Lee Pellegrini/Boston College

Those gathered for the Ibero-American Conference of Theology spoke with firsthand authority about both the movement and the pope who embraced it while a seminarian and priest in Argentina. Among them was one of the founders, the Rev. Gustavo Gutierrez, whose parish ministry among Lima’s poorest gave rise to his seminal 1973 book, “A Theology of Liberation.”

The Rev. Juan Carlos Scannone, the philosophy of liberation founder who taught Francis (then Jorge Mario Bergoglio) in seminary, recalled their student-teacher relationship before an audience of 250 in Robsham Theater. He told how Bergoglio warned him to never walk by himself because the Argentine military saw all liberationists as ideological enemies to be “disappeared.”

“For the military, we were all Marxists,” Scannone said. But in fact, he added, “I did not agree with the Marxist socio-political analysis.”

The meeting offered a venue to dispel myths and reclaim essentials. Liberation theology is neither a Marxist movement nor an anti-capitalist one, Scannone told RNS through a translator.

In Latin America, while some adherents have been involved in revolutionary Marxist projects, that’s been just one strain in a multifaceted theological tradition, according to Boston College theologian Hosffman Ospino.

“What’s really important for both liberation theology and liberation philosophy is reading the signs of the times,” Scannone said. “That’s why it’s essential that this philosophy, this theology, change ­— because the circumstances change and the world changes.” 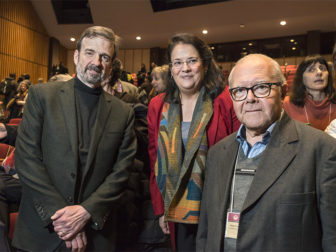 By distancing the movement from radical left agendas of the past, theologians today are carving room for new applications of liberationist thought. How the poor struggle today is different from the trials they suffered under Latin American dictatorships of the 1970s and ’80s, they noted. They see liberation theology providing a framework to pursue justice in new forms and fulfill the church’s potential.

Borders, for example, have become a hot topic as refugees flock to Europe by the millions and President Trump takes steps to keep migrants out of the United States.

Boston College theologian Roberto Goizueta called for a redefinition of “American” to include all people of the Americas. Seeing migrants through fresh liberationist eyes, he explained, is to see them not as intruding foreigners but as ambassadors of Christ.

“When we move out to encounter and to befriend the poor, we come eventually to see ourselves evangelized by the poor,” Goizueta said.

This week’s revisiting of liberationist thought comes as the Catholic Church vies to renew ties with Hispanics. Organizers hope the renewed focus can help bridge widening gaps between Hispanic communities and the church of their parents and grandparents.

In the United States, only 55 percent of Hispanics were Catholics in 2013, down from 67 percent just three years earlier, according to the Pew Research Center.

In Latin America and the Caribbean, where 89 percent of Hispanics were Catholics in 1970, today 80 percent are Catholics, according to data from the Center for the Study of Global Christianity at Gordon-Conwell Theological Seminary.

Conference co-organizer Rafael Luciani said Hispanics often don’t feel like full members of Catholic parishes in the United States, even though Spanish is the most-used language among Catholics worldwide. Even congregations that offer Masses in Spanish often don’t go beyond the liturgy to weave Hispanics into the faith community’s fabric.

“That’s our concern: we push people out instead of welcoming them,” said Luciani, a Boston College theologian. “Then we say that they went out, but we’re not creating the spaces of integration and welcoming that they deserve.”

The conference was rare in several respects. All workshops were conducted in Spanish, the native tongue of most participants, who came from South America, Central America, the Caribbean, Spain and the United States. Rather than deliver lectures, participants focused on small-group dialogues, or “encounters.”

In past decades, Ospino observed, anti-American sentiment would have likely led to sparse turnout among Latin American scholars at a U.S. event, but this one marked a new openness to cross-border collaboration within the church.

Participants came away with new regard for Francis’ worldview and how their understandings of Christian mission might dovetail with his. Scannone told the audience how Francis sees the community not as a sphere, which is “uniform and everything depends on the center,” but rather as a polyhedron, a solid figure with many plane faces.

“The unity in the polyhedron is actually sustained by the differences of the different sides, not in the homogeneity,” Scannone said. “In a sense, that reflects life in the United States of America.”

Though liberation theology is far from a household term, its ideas have become mainstream in Catholic social teaching on such issues as the environment and universal health care, Ospino said. It might now hold some keys to working effectively with an ambitious, visionary pope.

(G. Jeffrey MacDonald is a correspondent based in Boston)