No matter which side of the abortion debate you’re on, Kassi Underwood will challenge your beliefs.

In her book, “May Cause Love: An Unexpected Journey of Enlightenment After Abortion,” she admits her abortion was emotionally painful, which pro-lifers will like. But she claims her abortion led to enlightenment and brought her closer to God, which sounds progressive. She grieved her abortion and the loss of her baby, which may resonate with conservatives. But she was guided through her grieving process by a Buddhist abortion therapist, which feels progressive.

Underwood doesn’t seem to mind that her story makes both sides squirm because she doesn’t even like there are “sides.” She believes that both the pro-life and pro-choice camps get things wrong and have caused damage by politicizing the issue. Here we discuss how her story overturns common myths, and why she believes abortion has a “spiritual purpose.”

RNS: What kinds of emotional wounds did abortion leave?

KU: I can’t think of any emotional wounds abortion left; my pregnancy and abortion highlighted the wounds that had been with me since before I got pregnant. I could point to my childhood to explain where I came up with the ideas that caused me pain, but I take all the credit for making them up.

I made up the idea that I had to be sexually pure in order to be loved and that my primary purpose in life was motherhood. God is a cosmic matchmaker, always setting me up with painful experiences that contain the possibility of total healing. So I had an abortion and saw old emotional wounds and learned new tools for living. Thirteen years later, it seems God was saying, “Hey, quit telling me my will for your life. You have no IDEA what I have in store for you.” Truly, I did not and still don’t. 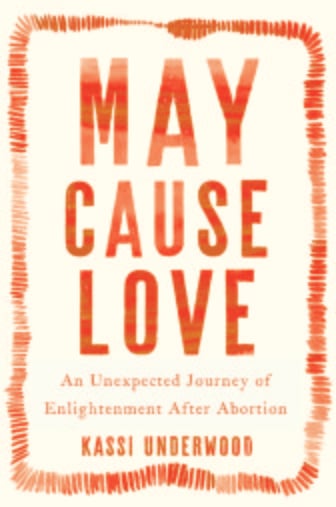 RNS: Why did you wait six years to start healing?

KU: I tried to start right away. I checked my college’s counseling center for a post-abortion support group, but no luck. So I read abortion poetry by Gwendolyn Brooks and Anne Sexton in my dorm and decided the only way to find support was to talk about it openly. I connected with the pro-choice messaging because I felt supported and understood to some extent. I rehearsed “my story” until the words seemed made of stone: “I don’t regret it. I feel good. It was hard. The end.”

Three years later, my ex had a baby with someone else and named her the same name I had mentioned for the baby that we didn’t have. I felt like I’d been struck by lightning, but it wasn’t acceptable to be pro-choice and feel devastated and wonder whether I’d made the right choice after all. It took three more years for the pain to motivate me to search for another way. I created a roadmap to recover my true experience and the possibility of a new life.

RNS: You say that American society often prevents healing after abortion. How so?

KU: The most obvious reason is that war isn’t healing. My abortion happened nearly 13 years ago. I still hear people yelling the exact same slogans today: same fight, different decade. How many times have you turned on the television and watched a woman speak honestly about her abortion with no political agenda? Or a woman talking about self-discovery after abortion?

I think we’ll look back on the abortion war as one of the greatest embarrassments in human history and an incredible source of pain for so many people.

We have cultural trauma around this. That’s why it’s so hard for people to talk about and hear new ideas about abortion, why people tune out discussions or nervously change the subject. Many offerings for support after abortion are fraught with political intrusions or people assuming to know exactly why we are suffering, what will make us feel better, and what our opinion of abortion should be when we leave. What’s missing is space for authentic conversations and deeper examinations of our experiences in the context of our entire lives and our culture–with the possibility of being happy and free.

RNS: What role does grief play in healing?

KU: To be healed is to be freed from fear. Grief is the tunnel we walk through to release fear. As I write in my book, a Buddhist therapist for abortion named Ava Torre-Bueno gave me a crash course in grief. All death involves loss. All change involves loss. My abortion was a loss. But here’s what Ava said that got me: all choice involves loss.

Regret and “what ifs” are defense against grieving. Per Ava’s suggestion, I started a “grief practice” of allowing feelings for 30 seconds per day. The tunnel of grief ends. A brilliant new reality is on the other side. I’m finished grieving my abortion, plus I’m pretty good at grieving on the spot. I can go straight to sobbing, then I’m done.

RNS: You say that abortion has a “spiritual purpose.” What do you mean by this?

It is my contention that the manifestation of any extreme also contains the possibility of bringing its opposite to fruition. So it’s worth considering that if abortion contains the potential for tearing our country apart – a potential that has been fully realized at this point – then it also contains the potential for powerful human connection. Understanding the collective spiritual purpose of abortion is something we will all have to learn together, as soon as enough of us have decided that war doesn’t work. The question is, when will we begin? 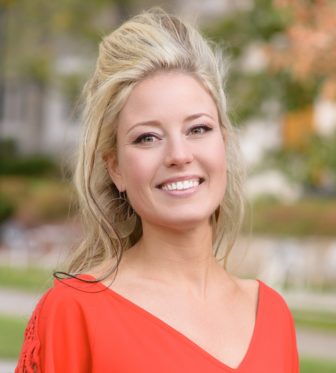 Kassi Underwood is the author of “May Cause Love: An Unexpected Journey of Enlightenment After Abortion”

RNS: Your subtitle is about enlightenment after abortion. What do you mean by that word and how is it connected to your story?

KU: Enlightenment means compassion. Compassion means to “suffer with.” Before my pregnancy, I’d judged people who’d had abortions, so when I found out I was pregnant, I vowed never to judge again. That lasted approximately two milliseconds.

The story I tell in my book is a series of moments in which I judged people and then realized: I’m just like them. I am literally suffering with them. I write about visiting a Roman Catholic retreat run by pro-life protestors, where I spent the weekend in a state of badly hidden rage. I was judging them for judging me. Talk about “suffering with.” I had judgments I didn’t even know I had.

I felt compassion for the baby all along, it was a large part of why I chose abortion–there were elements of my life to which I did not want to subject another human being. But I still worried. It was amazing to realize, ultimately, that the baby wasn’t suffering. I was. I had chosen to suffer. I made up the idea that this spirit-baby might not forgive me, as if it were sitting in therapy sessions in the afterlife, talking about how I’d screwed it up. Once I realized this nonphysical entity wasn’t blaming me for the way I’d handled three nightmarish weeks in 2004, I felt that it had compassion for me–or maybe I finally had compassion for myself.

RNS: How do you classify your views politically: pro-life, pro-choice, or something else?

KU: I want you to know how much I appreciate that you asked. I do have a political view, but I don’t have a name for it. I think we’ll look back on the abortion war as one of the greatest embarrassments in human history and an incredible source of pain for so many people. I hope we’ll realize that the media story being told about abortion is not in agreement with reality.

Women have had abortions throughout recorded history, dating back to 2500 B.C.E. Jesus never said the word. When the United States made abortion illegal from 1867 to 1973, the rate remained approximately the same as today. Not everybody who’s had an abortion wanted one. Many women feel fine after, yet many suffer greatly.

There’s much more to say, but a poster that hung on my apartment wall the year after my abortion sums it up: “We will meet, all of us women of every land, we will meet in the center, make a circle, we will weave a world web to entangle the powers that bury our children.”

RNS: Your experience with abortion is not like the typical story told by the media. How so?

KU: I think every experience with abortion is unique. I just tried to be honest. Historically, the pro-choice and pro-life movements have used people who’ve had an abortion to market what they’re selling. The pro-lifer’s sign reads, “I regret my abortion”; while the pro-choicer’s sign says, “I don’t regret my abortion.” It’s all very high school cafeteria: pick a lunch table or sit alone. That’s a tough place to be after an abortion. I had to get scary-depressed to admit that my experience was bigger than the story I allowed myself to tell.