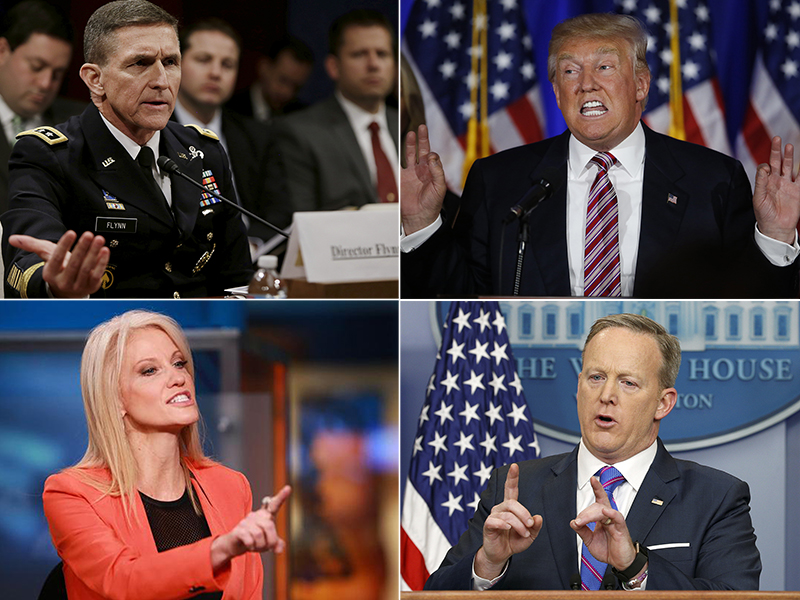 All of these are synonyms — euphemisms, for some — for another word: lie.

These words have been cast around as questions arise about statements President Trump and his administration have made on Russia, his family's business activities and crowd numbers attending his inauguration and subsequent protests.

We put those questions to representatives of four Abrahamic traditions.

On Yom Kippur, the Day of Atonement, when Jews repent before God for the sins they have committed in the previous year, inappropriate or untrue speech is considered one of the most serious transgressions.

"There is no justification whatsoever in Jewish tradition for lies which are either sloppy, systemic or self-serving"

Rabbi Fred Scherlinder Dobb, leader of Adat Shalom, a Reconstructionist synagogue in Bethesda, Md., thinks this is proper for the day Jews consider the holiest of the year.

"Words matter profoundly in a tradition that says God created the entire world through speech," he said. "We are told in Genesis Chapter 1 that we who are created in the divine image should strive to be divine in our use of speech. That means every word we utter should reflect our values, and one of the highest of those values is truth."

The Talmudic tradition — the 600 years of rabbinic teaching Jews hold as a central teaching — devotes much discussion to the consequences of "inappropriate speech," which includes lying. The Talmud, Dobb said, teaches that inappropriate speech "kills" three people — the speaker, the victim of the speech and the person who hears it.

"'Kills' is the actual verb,'" he said. "The potency of such speech is almost mystical because of the potential implications of such speech. If I overhear the president of the United States say a U.S. judge of Mexican ancestry is unfit for the bench and then I say or do something to heed that nativist, anti-Mexican sentiment, it can have life or death implications for myself and others.

"These sins," he continued, "are not easily wiped away on Yom Kippur."

But Judaism permits the telling of some lies — those that preserve peace or avoid evil. It is an exception shared by all three Abrahamic faiths: Judaism, Christianity and Islam.

"Peace is such a great principle that even God lies to uphold it," Dobb said, citing the Genesis story of God telling the elderly Sarah that she will give birth to Isaac. Sarah laughs and basically asks, "How will my husband, Abraham, manage that when he is so old?" When God tells Abraham of Isaac's birth, he lies about Sarah's reaction, leaving out the laughing part.

"This shows that truth is vital, but not always the sole consideration," Dobb said. "That said, there is no justification whatsoever in Jewish tradition for lies which are either sloppy, systemic or self-serving."

Because of that, Adat Shalom, which has just under 500 member families, has begun to include a recitation of Psalm 85, verse 11 in every Saturday morning Shabbat, or Sabbath, service.

"It is not part of the core liturgy, but it is a choice we are making as a way of reminding ourselves and anyone we reach at a given worship of what we must uphold even when the most powerful people around us are not," Dobbs said. "We use the power of music to amplify the power of scripture over the power of the executive."

Then he recited the verse:

"Kindness and truth have met; righteousness and peace have kissed."

"The essence of the Ten Commandments is pretty basic: 'Don't tell any lies,'" said David Cloutier, an associate professor of theology at the Catholic University of America.

Perhaps because of that clarity, great church thinkers such as St. Augustine and St. Thomas Aquinas — separated by eight centuries — came to the same conclusion: It is a sin to tell any lie.

Through the centuries, other Catholic theologians have added nuances, all of which are now reflected in the Catholic Church's catechism — a summation of all things that Catholics believe.

"Lying consists in saying what is false with the intention of deceiving one's neighbor," the catechism states. And "an offense against the truth requires reparation."

"The work is in understanding what a lie is," Cloutier said. "A lie has to include an intention to deceive people and told to someone who has a right to know the truth."

So a joke is not a lie, nor is making a false statement that you believe to be true. And a lie told to prevent evil is not a sin. So if the Gestapo asked if Anne Frank was hiding in the attic, it would have been OK to avoid telling the truth and say, "No."

"Catholics should not accept lies for the sake of some further end, even if that end is highly desirable"

But Catholics are "called," Cloutier said, to continually seek the truth, even in the face of lies from people in power.

"Catholics should not accept lies for the sake of some further end, even if that end is highly desirable," he said. "The tradition has long taught that one may not choose an evil as a means to achieving a good, and so the duty to seek the truth can never be abandoned."

And when a lie is spoken with the intention to deceive, the catechism teaches the consequences are personal, social and spiritual.

"They harm a person's relationship to God, because God 'is the truth and wills the truth,'" Cloutier said. "The catechism quotes Aquinas, who says that people 'could not live with one another if there were not mutual confidence that they were being truthful to one another.' Lying fundamentally disrupts our relationships to one another in a society. Society would crash if we lost confidence in truth-telling."

The Quran is clear on the rewards of truth:

And the hadith — the sayings of Prophet Muhammad — lay out the consequences of lying:

"Beware of lying! Verily, lying leads to wickedness and wickedness leads to the Fire. One does not cease lying and supporting lies until he is written with God as a liar." (Sahih Al-Bukhari: Book 73, Hadith 116)

Those are the two passages that come immediately to Engy Abdelkader, an adjunct professor at Georgetown University who studies Islamophobia, when asked about Islam's teaching on the spiritual consequences of bearing falsehoods.

"Similar to Christians and Jews, Muslims believe there will be a day of judgment when there will be a full accounting of one's deeds," she said. "Even if these deeds are hidden from public view, Muslims will be asked about them at their day of accounting, and ultimately God will decide whether the individual will be a resident of heaven or hell."

There are more immediate consequences to lying, Abdelkader said. A lie places distance between the teller and God, disrupting the peace and the blessings promised by knowing God. But ask God for forgiveness — directly, as Islam has no intermediaries — and the relationship will be restored.

There are exceptions to the no-lying rule. As in the other Abrahamic faiths, a lie that prevents great evil is not a lie. And Islamic scholars of all ages and all kinds have dedicated a lot of discussion to the concept of "taqiyya" — lying about one's religious beliefs, or omitting to mention them. Mainstream Islamic scholars say taqiyya is not blanket permission to lie; it is permitted only in the face of great evil, such as to save a life.

Nor is it permissible under the Quran, Abdelkader said, to answer one lie with another. Instead, she said, Muslims must respond to evil with good and "rise above, morally and ethically."

"The best response to the 'alternative facts' we have been confronted with, like the falsehoods informing the executive order (for a travel ban) that is really a Muslim ban, is to challenge it with research-based evidence," she said. "There is widespread belief, not just among Muslims, that this measure is not based on any empirical data.

"In terms of American Muslims, we need to continually highlight the community's positive contributions since the founding of this country while challenging so many of these pernicious myths around this community with research and empirical data."

For the Rev. Paul Raushenbush, the equation is simple: To lie is to sin.

"The Lord detests lying lips but he delights in people who are trustworthy," said Raushenbush, an American Baptist minister and senior vice president for public engagement at New York City's Auburn Seminary, quoting Proverbs. "Sin is when we are missing that mark, either willfully or because we are unaware of it."

A "clear line is being drawn," Raushenbush continued, between what is fact-based and what is not, and Christians align themselves with the facts — or risk compromising the Christian message.

Raushenbush points to the experience of 19th-century Baptist theologian Walter Rauschenbusch, his great-grandfather. Rauschenbusch worked among the poor of New York City and noted how many died of the effects of poverty — malnutrition, disease, overwork, etc. The experience helped him advance what Christians call the "social gospel" — the idea that Jesus called them to battle poverty, not just try to win souls or gain heaven.

"Those facts (about the number of dead among the poor) helped him understand what God required of him at that time," Raushenbush said.

So to lie, or to knowingly let a lie stand as truth, is to place in jeopardy one's relationship with God.

"I know this is getting subtle, but if Trump lies about facts, then whatever he says is the truth is not the truth," he said. "If we believe that this world is imbued with God’s reality, then to lie about reality is a deep affront to what is sacred and what is God."

Because of that, Raushenbush said, people of all faiths must examine and adhere to facts and truth.

"You have to name things what they are because that is what witnessing is," he said. "That is what it means to be a prophetic witness in the world — to name what is true."