(RNS) Support for a temporary ban on Muslims entering the United States has dropped among all religious groups — except white evangelicals.

RELATED: Christians in the pew and pulpit diverge over Trump policies on refugees 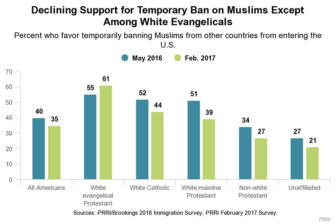 Declining Support for Temporary Ban on Muslims Except Among White Evangelicals. Graphic courtesy of PRRI

In fact, among this group support for such a ban has only solidified since last May, when President Trump campaigned on that promise, according to a survey released Friday (Feb. 24) by Public Religion Research Institute, or PRRI.

A majority of white evangelical Protestants still favor banning Muslims temporarily from coming to the U.S., according to PRRI. That number has risen to 61 percent, up from 55 percent in 2016.

Only 27 percent of nonwhite Protestants favor a ban, down from 34 percent.

In total, just 35 percent of Americans support a temporary ban on Muslims entering the country, down from 40 percent in 2016.

Trump issued an executive order impacting immigrants and refugees in late January; it has since been blocked by the courts.

But just 31 percent of nonwhite Protestants and religiously unaffiliated Americans, 26 percent of Americans belonging to non-Christian religions and 25 percent of Hispanic Catholics reported a favorable view of the president. That’s even lower than the general public at 43 percent — a number that has not moved since last year.

PRRI surveyed 2,031 American adults by phone between Feb. 10 and Feb. 19, according to its methodology. The margin of error for the survey is plus or minus 2.6 percentage points, it said.