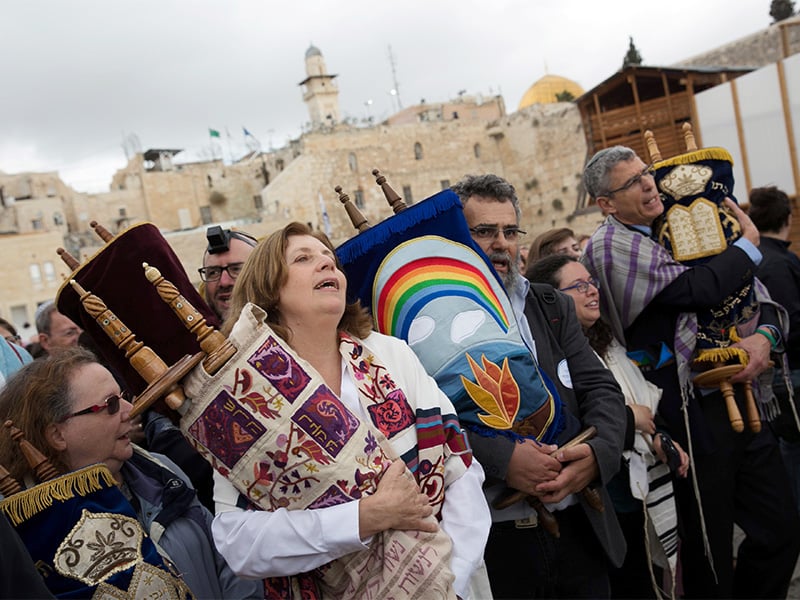 Anat Hoffman (second from left in foreground), chair of Women of the Wall, an activist group that is challenging the Orthodox monopoly over rites at the Western Wall, holds a Torah scroll during a monthly prayer at the site on Nov. 2, 2016. The Western Wall is Judaism's holiest prayer site. Photo courtesy of Reuters/Michal Fattal
February 27, 2017
Yonat Shimron

JERUSALEM (RNS) An Orthodox Jewish organization opposed to female-led prayers at the Western Wall bused in between 1,000 and 2,000 Orthodox high school girls to prevent a feminist group from praying.

Liba, an organization whose goal is to prevent pluralistic prayer at the holy site, instructed the girls to fill up the women’s section so the feminist group, Women of the Wall, could not enter to perform their monthly prayer on Monday (Feb. 27).

Although most of the teens prayed quietly, some blew whistles and yelled at the feminist Jews, who were forced to pray in a corner of the women’s section, behind police barricades. Members of the Women of the Wall group are Reform, Conservative and Orthodox Jews.

The disturbance was not limited to women. Hundreds of ultra-Orthodox men screamed and some pushed and kicked Women of the Wall participants and journalists.

And Western Wall administrator Rabbi Shmuel Rabinowitz broadcast the men’s morning prayers over a loudspeaker that is ordinarily used only during some Jewish festivals.

Despite the commotion, a 12-year-old girl celebrating her bat mitzvah successfully read from the Torah surrounded by 200 Women of the Wall supporters and her family.

For nearly a year, Liba has been organizing ultra-Orthodox prayer services at Robinson’s Arch, the unofficial site for non-Orthodox prayer at the wall. Last week the organization formally started a campaign to “stop contempt of the Kotel" (the Hebrew reference to the Western Wall).

Liba has mobilized mounting opposition to a government plan to turn Robinson’s Arch into an official, government-funded pluralistic prayer space.

Debbie Hill, a photojournalist who was pushed to the ground Monday by a group of angry yeshiva students, told RNS that many of them “were clearly Americans. They were calling the Women of the Wall Nazis and prostitutes. Some were shouting, 'Trump, Trump, Trump.'”

Hill called it a “hypocrisy” that ultra-Orthodox men who demand that women sit in the back of buses due to reasons of religious modesty “don’t have any trouble touching a woman when they want to beat her up.”