(RNS) A decade ago, a critic accused me of writing a book about a “nonexistent” threat from the religious right. One reviewer called my work a “paranoid rant” while another detractor wrote my “alarmist” views were “exaggerated and implausible.”

In “The Baptizing of America: The Religious Right’s Plans For The Rest Of Us,” published in 2006, I had warned that a well-financed and highly organized group of religious and political leaders was seeking to impose their narrow extremist beliefs and harsh public policies on the United States, even as our nation’s population was increasingly multireligious, multiethnic, and multiracial.

The intention of that group, whom I labeled “Christocrats,” was to establish a white-dominated nationalistic “Christian America” officially buttressed and ruled by judicial, presidential and congressional law.

Some readers scoffed at my assertion that religious right leaders wanted to enforce a punitive religious domination over the totality of American life by first infiltrating a major political party and then ultimately gaining mastery of that party to achieve their goals that include legal control over our bedrooms, public schools, media, hospital rooms, medical laboratories, courtrooms, libraries, workrooms, and public spaces.

I remember my participation back then in a public forum where my book was discussed. A panelist laughed at my “wild” assertions, and many in the audience joined in the laughter.

The once-popular song “They Didn’t Believe Me” could have been the theme that night. But in light of current events and numerous examples that validate my assertions, the appropriate song today should be “Who’s Sorry Now?”

One current example of the religious right’s systematic efforts is Betsy DeVos’ campaign to weaken what her husband has described as “government schools,” a pejorative for public education in America. DeVos, President Trump’s pick to head the Department of Education, never attended a public school, nor have her children.

The religious right’s opposition to abortion, contraception, and birth control is well documented. Little by little, it has chipped away at the 1973 Roe v. Wade Supreme Court decision that provided for legal abortions. But since that ruling, a sitting president or vice president had never personally addressed the annual March for Life rally in Washington, D.C.

The president’s recent executive order banning refugees from seven Muslim-majority countries from entering the U.S., along with his aim to grant preferential entry to Christian refugees, is a clear case of official governmental favoritism towards one particular religious community: a longtime goal of the Christocrats.

By coincidence, Trump’s executive refugee action took place on International Holocaust Remembrance Day established by the United Nations in 2005 to remind the world of “the murder of one-third of the Jewish people, along with countless members of other minorities.” And this year Antonio Guterres, the newly elected U.N. secretary general, declared the Holocaust was “a systematic attempt to eliminate the Jewish people and so many others.”

Breaking the long-held tradition of previous Republican and Democratic presidents, Donald Trump’s Holocaust statement omitted any specific mention of the Nazis’ mass murder of six million Jews. The White House defiantly announced it was no oversight or error.

That egregious omission is akin to an official condemnation of the “peculiar institution” of human slavery in the U.S. without acknowledging the slaves were African-Americans. Similarly, the president’s omission in his statement is similar to any public apology about the World War II internment camps that fails to note that Japanese-Americans were interned.

Trump has expressed admiration for President Andrew Jackson. Perhaps our current chief executive is unaware of Jackson’s policy in the 1830s of uprooting Native Americans from their ancestral homelands and forcibly sending them into bitter exile. One cannot describe Jackson’s presidential action — termed the “Trail of Tears” — without explicitly identifying which groups were expelled.

Is President Trump’s deliberate omission of specific references to the Jewish victims of the Holocaust part of the religious right’s campaign to blanch out any distinctiveness within the pluralistic American population? Are Jews, Muslims, African-Americans, Asian-Americans and Native Americans “real” Americans who have uniquely suffered or does the religious right exclude them in its narrow version of America?

I draw no joy in pointing out the dangers of the religious right nor do I expect critics to admit they were wrong about my predictions.

Instead, I urge them to join millions of other Americans in vigorously opposing the ominous specter of bullied Americans kneeling in submission to a dangerous perversion of religion and politics that can destroy our precious American democracy. 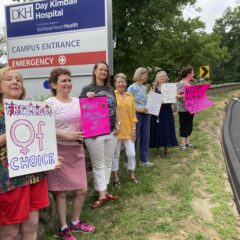