PHILADELPHIA (RNS) I am a rabbi, a Jewish leader and teacher, who serves a congregation only a short distance away from Mount Carmel Cemetery.

Several families in my congregation have loved ones buried in the cemetery, a history of connection stretching back nearly 100 years. When I heard on Sunday that the cemetery had been desecrated, I felt compelled to go there, to see what had happened with my own eyes.

What I saw reminded me of something very deep and very ancient in Jewish tradition.

“When I die, treat me with true love” (Genesis 47:29). In the Bible, when Jacob is coming to the end of his life, he calls his son Joseph to him and asks that his body be treated with “true love” – in Hebrew, hesed v'emet.

In Jewish tradition, how we treat the dead has long been seen as the ultimate test of love and loyalty, since in burying, memorializing and remembering those we have lost, we are performing an act of love for someone who can never perform such an act for us in return.

Caring for graves and for cemeteries is an act of pure altruism, the "true love" that Jacob asks from his son. So it is no surprise that one of the first things that Jews did upon arriving in America was to buy land and create cemeteries in which to bury and honor the dead.

In that context, the intentional toppling of hundreds of gravestones at Mount Carmel Cemetery in northeast Philadelphia that was discovered on Sunday is a shocking and painful violation for the Jewish community.

As I saw when I spent time at the cemetery Sunday afternoon, and as you can see in the photo above, this was not a casual act; these gravestones weigh hundreds of pounds, and some were even reinforced with iron bars connecting them to their bases. Bringing them down to the ground required great force and determination.

This is one of the oldest Jewish cemeteries in Philadelphia, and it is surrounded by other, non-Jewish cemeteries that were not affected, so it seems hard to escape the conclusion that Jewish graves were targeted.

At the cemetery, I grieved for the families whose loving attempts to memorialize in stone those they had lost were desecrated, brought crashing to the earth and in some cases broken.  The sadness and anger and despair at such a senseless act were overwhelming.

And then I met some people who had come to the cemetery on hearing what had happened, filled with the desire to make things right. Some of them were Jews, some were Christians, and some were Muslims.

No one organized them to come, and they had no clear plan. But they all shared the feeling that what had happened at the cemetery was wrong and should not be allowed to stand. You can see some of them in the photo below. 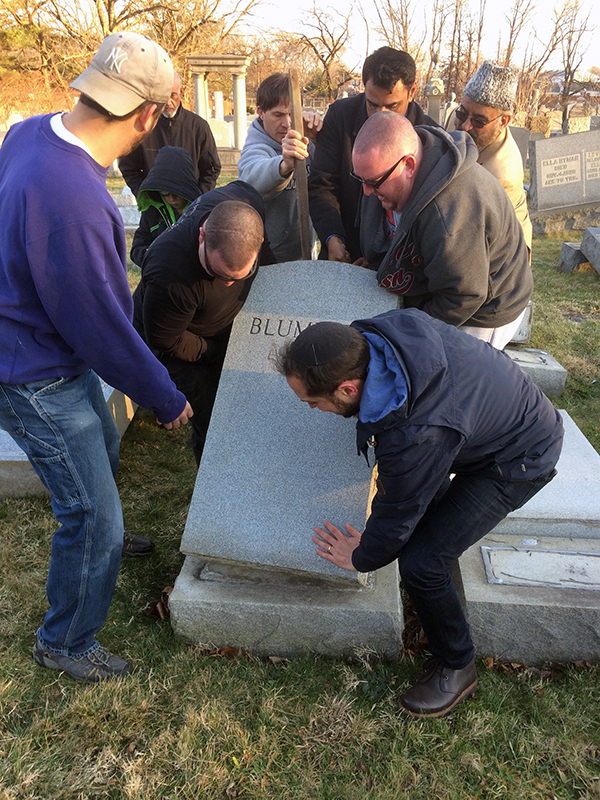 I joined them as they gathered together to try to lift up some of the stones that had fallen and replace them on their bases. It was difficult work, and many efforts had to be abandoned when we couldn't move the huge stones even a millimeter. But slowly, carefully, we lifted one stone after another, strangers of many faiths working together to begin, in a small way, to repair the damage.

The shock, the grief, the worry and the fear that Jews in Philadelphia and religious and ethnic minorities across America are feeling are real. And the good people of all faiths and races who surround us, who partner with us to push back the darkness with their light — they, too, are real. Neither cancels out the other.