(RNS) A bill that would make “In God We Trust” — the national motto — mandatory on Tennessee license plates has gone off-road.

The state’s attorney general, Herbert Slatery III, said such a law may violate both the U.S. and Tennessee constitutions, which protect against the government establishment of religion.

The phrase — which appears on all U.S. currency — “clearly has religious overtones,” Slatery said in a legal opinion crafted at the request of the bill’s sponsors.

“It is this religious aspect of the phrase that gives rise to questions about the constitutionality of legislation that would require all vehicle registration plates to bear the language ‘In God We Trust,’” Slatery’s nine-page opinion states.

“In God We Trust” first appeared on U.S. coins in the 19th century, but it became the nation’s official motto in the mid-1950s, at the height of the Cold War against “godless” communism, the same time “under God” was added to the Pledge of Allegiance.

Slatery found no constitutional conflict with making “In God We Trust” an optional choice, as about 20 states currently do.

But he cited the 1977 Supreme court decision Wooley v. Maynard, which distinguished between having the phrase on legal tender and requiring it on vehicle tags.

“[W]e note that currency, which is passed from hand to hand, differs in significant respects from an automobile, which is readily associated with its operator. Currency is generally carried in a purse or pocket and need not be displayed to the public. The bearer of currency is thus not required to publicly advertise the national motto.”

The Tennessee bill was filed in the General Assembly in January and is sponsored by two Republicans, Rep. Bill Sanderson and Rep. Paul Bailey. Both the American Civil Liberties Union and American Atheists oppose the legislation. 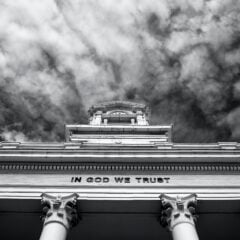 News
In many COVID hot spots, a pattern: High concentrations of white evangelicals
Follow us on Facebook!
Submit your photos to RNS