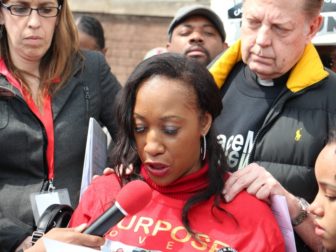 Pamela Montgomery-Bosley, co-founder of parent support group Purpose Over Pain, speaks April 14, 2017, at the Good Friday Walk for Peace through the Englewood neighborhood of Chicago. Behind her stands the Rev. Michael Pfleger of St. Sabina parish. RNS photo by Emily McFarlan Miller

CHICAGO (RNS) It was the seventh station of the cross, recalling the second of Jesus’ three falls on his way to his crucifixion.

After the Scripture had been read and prayers said aloud, Pamela Montgomery-Bosley also remembered her 18-year-old son, Terrell Bosley, who fell victim to gun violence in 2006. He was shot and killed on the grounds of a church, “a place that should have been safe,” she said as she stood in front of a white cross bearing her son’s name.

After his killing, Montgomery-Bosley was tempted to take her own her life.

Now, she realizes, she must carry the cross, she said.

“Every day, me and so many parents carry the cross that we did not ask for. We carry the cross of waking up without our children,” said Montgomery-Bosley, who co-founded a parent support group, Purpose over Pain.

“I’m here standing today to tell my story because God has kept me through it all. He’s given me strength.”

She shared her story Friday (April 14) at a stop along the Good Friday Walk for Peace through Chicago’s Englewood neighborhood, a community that has been scarred by gun violence. 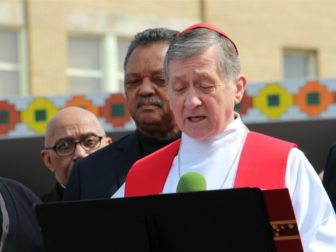 The walk was led by Cardinal Blase Cupich, who was joined not just by the city’s Catholics, but also by interfaith and civic leaders, including the Rev. Jesse Jackson; David Inlander, chair of interreligious affairs for the American Jewish Committee; and Imam Warith Mohammed, president of Mosque Cares. The archdiocese estimated 1,500 walkers joined the cardinal.

“The people gathered here in this march, in this way of the cross today, are in fact what we know as the people of Chicago,” Cupich said. “This is the way we should be. This is our aspiration for what the wonderful city that we live in should always be.”

Good Friday is the day Catholics and many other Christians commemorate Jesus’ crucifixion; some re-enact Jesus’ steps on his way to the cross. There are 14 stations marking that journey: among them, his conviction at the hands of Pontius Pilate; his nailing on the cross; and finally, his body laid in the tomb.

At each station, those walking Friday through Englewood read aloud the names of those killed this year on Chicago streets. They sang hymns like “Were You There” and “We Shall Overcome.” Comforted by his family and the Rev. Jesse Jackson, 10-year-old Montrell Davis of Chicago’s Austin neighborhood speaks April 14, 2017, at the Good Friday Walk for Peace through the Englewood neighborhood. RNS photo by Emily McFarlan Miller

More than 160 people have been killed this year in Chicago, according to the Chicago Sun-Times. That’s on par with last year’s violence, which claimed the lives of nearly 800 people, the most in at least 20 years, the Sun-Times reported.

Among the youngest: a 2-month-old baby.

At the third station, marking Jesus’ first fall, 10-year-old Montrell Davis wiped tears from his face. Watching other children in the city fall victim to violence, he said, makes him sad. He wants them to grow up, too.

“I’m begging you to stop the violence,” Montrell said.

The walk is part of a new anti-violence initiative in the archdiocese, one of the largest and most influential in the United States. The initiative includes a fund, seeded with $250,000 from the archbishop’s discretionary funds, to promote programs that have proved effective in combating violence and lifting people out of poverty, Cupich announced earlier this month.

And it has the support of Pope Francis, who personally chose Cupich in 2014 to lead the Archdiocese of Chicago and elevated him to cardinal last year.

In a letter addressed to Cupich, Francis promised to accompany him — as well as “all those who walk with you and who have suffered violence in the city” — in prayer as the pope walked the Stations of the Cross in Rome.

In his remarks Friday, Cupich implored Chicagoans to bond together to change the circumstances that cause people to despair and turn to violence.

“Let’s begin and realize that what we did today in walking is just the first step,” he said. “And let us continue to walk together.” 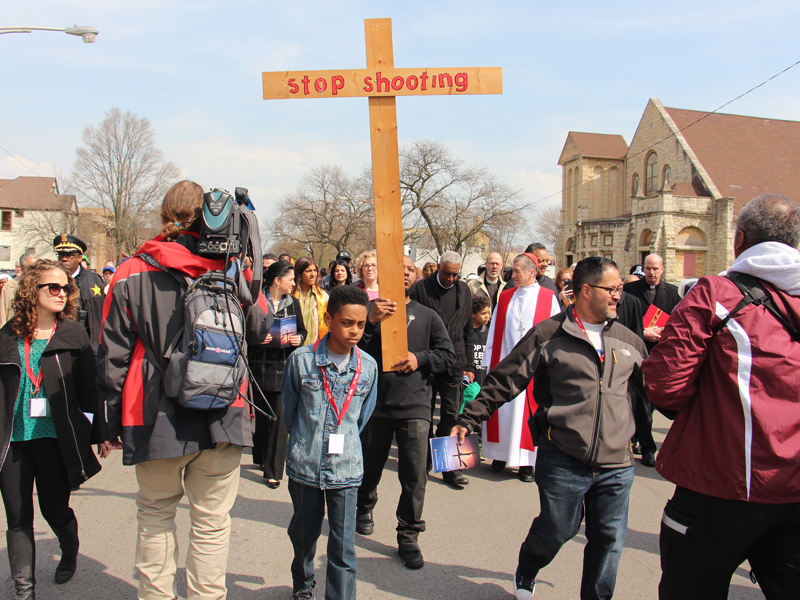 Cardinal Blase Cupich led the Good Friday Walk for Peace on April 14, 2017 through Chicago’s Englewood neighborhood, a community that has been scarred by gun violence. He was joined by more than 1,500 neighbors and interfaith and civic leaders as he walked the traditional Stations of the Cross. RNS photo by Emily McFarlan Miller