WASHINGTON (RNS) The leader of the Catholic religious order that helped found Georgetown University addressed more than 100 descendants of slaves and sought their forgiveness.

“Today the Society of Jesus, which helped to establish Georgetown University and whose leaders enslaved and mercilessly sold your ancestors, stands before you to say: We have greatly sinned, in our thoughts and in our words, in what we have done and in what we have failed to do,” said the Rev. Timothy Kesicki, president of the Jesuit Conference of Canada and the United States.

Georgetown has recently acknowledged it benefited from the sale of more than 250 slaves in 1838 to pay off its debts. On Tuesday (April 18), it apologized for its role in the slave trade during a formal “contrition” liturgy.

The Rev. Timothy Kesicki, president of the Jesuit Conference of Canada and the United States, apologizes during the “Liturgy of Remembrance, Contrition, and Hope” at Georgetown University on April 18, 2017, for Maryland Jesuits’ sale in 1838 of 272 slaves that benefited the university. RNS photo by Adelle M. Banks

The four candles, representing four plantations involved in the 1838 sale of 272 slaves by Maryland Jesuits, were used in the “Liturgy of Remembrance, Contrition, and Hope” at Georgetown University on April 18, 2017. They were carried by descendants during the opening procession. RNS photo by Adelle M. Banks

Earl Williams Sr., one of the descendants of slaves sold by Maryland Jesuits, prepares to process down the aisle of Georgetown University’s Gaston Hall for the “Liturgy of Remembrance, Contrition, and Hope” on April 18, 2017. RNS photo by Adelle M. Banks

The Rev. Leroy Baker and Onita Estes-Hicks, two descendants of slaves sold by Maryland Jesuits, read from the biblical Book of Isaiah during the “Liturgy of Remembrance, Contrition, and Hope” at Georgetown University on April 18, 2017. RNS photo by Adelle M. Banks

Georgetown University hosts a “Liturgy of Remembrance, Contrition, and Hope” recalling its ties to slavery in Washington, D.C., on April 18, 2017. RNS photo by Adelle M. Banks

Jeremy Alexander, left, with red tie, a Georgetown University employee, poses among other family members who are descendants of slaves sold by Maryland Jesuits to benefit the school, after the “Liturgy of Remembrance, Contrition, and Hope” at Georgetown University on April 18, 2017. RNS photo by Adelle M. Banks

A choir sings before two buildings at Georgetown University are renamed, one in honor of a slave sold by Maryland Jesuits, and another for a free black woman educator, on April 18, 2017. RNS photo by Adelle M. Banks

Georgetown University President John J. DeGioia speaks at dedication ceremony of two buildings at the school that were renamed, one in honor of a slave sold by Maryland Jesuits, and another for a free black woman educator, on April 18, 2017. RNS photo by Adelle M. Banks

Some of the descendants of those slaves spoke during the ceremony, jointly hosted by the school, the Jesuit order and the Archdiocese of Washington. One of the families’ representatives said penance is required, even as forgiveness is sought.

“Penance is very important,” said Sandra Green Thomas, president of the GU272 Descendants Association. “Penance is required when you have violated God’s law.”

The day of remembrance, which included a liturgy and the rededication of two buildings, came seven months after the university announced plans to mark its connections to the slave trade. Those plans were sparked by a 104-page report from a working group of students and faculty that met for a year before making recommendations.

In 1838, the school was involved in the sale of 272 slaves who worked on Jesuit plantations in southern Maryland. The sale benefited that state’s Jesuits and paid off debts at the nation’s oldest Catholic university.

The “Liturgy of Remembrance, Contrition, and Hope” was steeped in symbolism of time and space. It was held two days after Easter, when Christians celebrate the resurrection of Jesus, and two days after Emancipation Day, a holiday that marks the abolition of slavery in the District of Columbia in 1862.

The school decided to name one building Isaac Hawkins Hall, in honor of a slave who was 65 years old when he was sold in 1838. His name was the first of the slaves listed on the sale documents, and most of his children and grandchildren were also sold to Louisiana businessmen.

Hawkins’ labor and his value helped build Georgetown and rescue it from financial crisis, according to the working group report.

The day’s written program noted that Isaac was the name of a biblical figure who was spared by God, but that the now-honored slave with that name “was not spared. He was sold.”

A second building was designated Anne Marie Becraft Hall, in honor of a free African-American woman who founded a school for Catholic black girls in the Georgetown neighborhood and later joined the Oblate Sisters of Providence, the oldest group of nuns started by women of African descent. 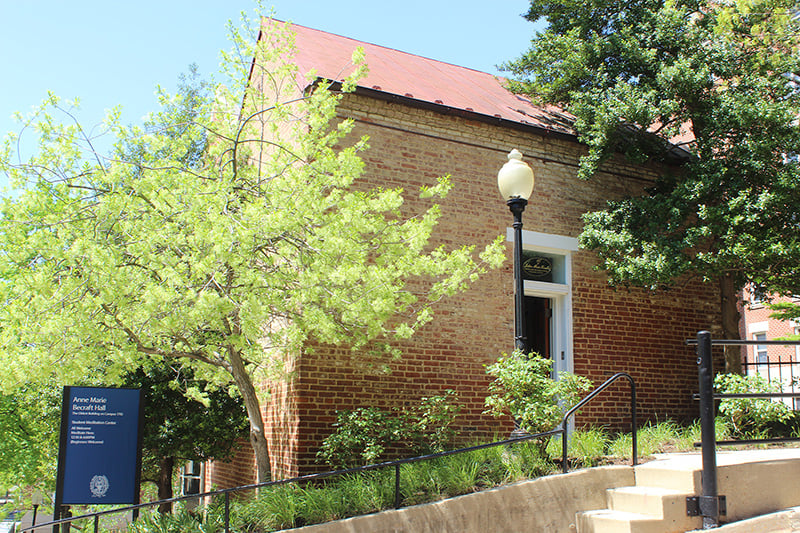 Previously, those buildings were named for the Rev. Thomas Mulledy and the Rev. William McSherry, respectively, former university presidents who were priests and supporters of the slave trade. In 2015, the buildings were temporarily named Freedom Hall and Remembrance Hall.

Isaac Hawkins Hall is part of a residential complex that houses more than 140 students and a chaplain. Anne Marie Becraft Hall, the oldest building on campus, is a meditation center for students, staff and faculty.

The school had earlier announced it would award preferential status in the admissions process to descendants of the enslaved.

In its report, the working group recommended that university and Jesuit officials apologize for its history related to slavery, calling it “a precondition for reconciliation” and an action that can lead to more debate and discussion.

“An outright apology is not yet part of the history for the University,” the working group said in September. “It ought to be.”

Though Kesicki said he sought forgiveness from the slave descendants, he noted, “we have no right to it.”

Some of the descendants were ready to offer forgiveness, including Jeremy Alexander,  a university employee who recently learned he was related to some of the sold slaves.

“I am willing to forgive,” said Alexander, who works in the school’s Office of Technology and Commercialization. “I think that was a lot for them to take those steps to say that they were sorry publicly.”

But even with that willingness to “move forward with this healing process,” he said, “it’s not over” and society’s inequalities still need to be addressed. 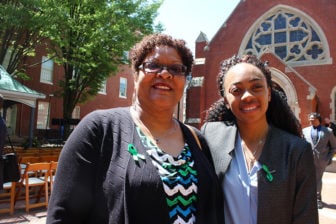 Delores Williams Johnson of Union Park, Ill., and her great-niece Denise Neal of San Diego, two descendants of Isaac Hawkins, a slave sold by Maryland Jesuits, attended the ceremony at which a hall was renamed in his honor at Georgetown University on April 18, 2017. RNS photo by Adelle M. Banks

“I think in one sense it has taken a lot of effort on the descendants’ parts to push Georgetown and the Jesuits to acknowledge us and not dictate to us,” said Williams Johnson. “There has to be ongoing meaningful conversation.”

The working group has recommended university officials meet with descendants and work toward greater diversity on the campus.

Georgetown President John J. DeGioia, who also apologized during the ceremony, began visiting descendants in the summer, and the school created a department of African-American studies in June. In March, the university hosted a consortium of two dozen U.S. and Canadian universities that are examining the history of slavery at their schools.

“Outreach and collaboration with the descendant community will continue over the months, years, and decades to come,” resolves a booklet distributed for the liturgy and dedication events.

Martini Judaism
Will God save the Queen?

News
J.D. Hall, pastor and founder of Pulpit&Pen, admits fabricating story about trans activist
Follow us on Facebook!
Submit your photos to RNS