The Department of Defense announced a near doubling of its list of recognized religions. It will now formally recognize humanism and other minority faiths among members of the armed forces.

The move, which came at the end of March but was made public this week, means servicemen and women who are adherents of small faith groups are now guaranteed the same rights, privileges and protections granted to their peers who are members of larger faith groups.

The move was lauded by humanist organizations, which have been pushing for full recognition, including their own chaplains, for 10 years.

“Beyond Humanism, the new listing is a win for diversity in general,” Jason Torpy, president of the Military Association of Atheists and Freethinkers, said in an announcement. “There have been prior declarations that the government or the military has recognized Humanism in one way or another. But this is different.”

Previously, the U.S. military recognized just over 100 religions. The new list has grown to 221 to include the earth-based faiths, such as heathens and Asatru, and an additional eight Protestant groups, including the International Communion of the Charismatic Christian Church.

Jewish servicemen and women may now choose among Orthodox, Conservative and Reform instead of just “Jewish.”

Torpy, a West Point alumnus whose humanism was not recognized when he attended in 1998, offered thanks to the Armed Forces Chaplains Board, which oversaw the new list.

“This is really good,” he said. “But the still-to-do’s include a statement from the chaplains in the services saying we encourage humanists to come to our chapels to get humanist materials and referrals.”

Torpy said his organization is ready with “chaplain outreach” to help train military chaplains in humanist beliefs and needs.

Josh Heath, co-director of the Open Halls Project, which works to support heathens and other earth-based faiths in the military, said the newly recognized groups will now find it easier to get their holidays off, travel off-base to religious services, or keep special religious items in the barracks.

“If you run into any miscommunication about your religious needs you can say this is my official religious preference and be accommodated,” he said.

Heath hopes it will make it easier for military heathens to find each other and form on-base communities.

And there’s another plus: The Department of Defense will now have more accurate counts of each recognized religious group, which varies widely depending on who’s counting.

According to MAAF figures, more than 22 percent of service personnel identify as “no religious preference,” and slightly more than 1 percent identify as “atheist” or “agnostic.” In 2010, the Defense Equal Opportunity Management Institute estimated humanists make up 3.6 percent of the U.S. military.

The new policy has its detractors. Writing for Reporter, the official newspaper of the Lutheran Church-Missouri Synod, Roger Drinnon said a “heavily secularized military culture, stemming from ongoing atheist activism and LGBT advocacy,” has led to “an environment where restrictions and even punitive actions reportedly are being imposed on chaplains, commanders and lower ranks who seek to serve without compromising their religious faith.”

Humanism was recognized by the Army in 2014, but this new order expands that to all branches of the military. 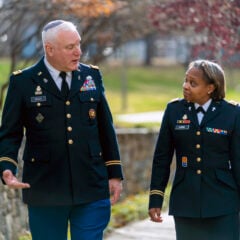